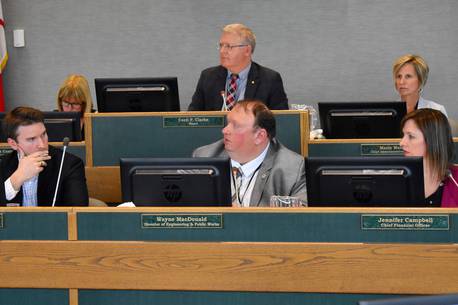 CBRM council has endorsed a proposed $224-million, four-year plan, that if afforded full funding, will go a long way toward overhauling key infrastructure of the cash-strapped municipality.

The plan was approved in principle on Wednesday when council unanimously voted for a $59.5-million 2019-2020 capital budget that was presented by CBRM chief financial officer Jennifer Campbell.

If the required funding is leveraged from the provincial and federal governments, the proposed four-year strategy would include $78.5 million for road rehabilitation, $68 million to bring the municipality’s waste water treatment systems up to federal compliance, $13 million for Cape Breton transit, and $10.7 million for fleet, fire vehicles and equipment upgrades. The plan also includes $28 million for in-progress projects like Sydney’s second cruise ship berth, the renovation of the Glace Bay arena (Bayplex) and the new Glace Bay police station.

But while both the capital budget for the new fiscal year and the four-year capital plan sounds good on paper, CBRM senior staff acknowledged that not all of the associated expenditures are a sure thing at this time.

Although the draft budget was presented by Campbell, public works director Wayne MacDonald, whose department administers most of initiatives, ended up fielding the majority of questions from councillors curious as to what projects already have approved funds and which ones are still awaiting funding approval.

“Although it sounds great with a $59-million budget conditional on funding, we don’t have all of the answers on the funding today,” said MacDonald.

“It would have been a lot easier to come in here with approvals and funding already planned out because then the capital budget would be a lot easier.”

Dist. 9 Coun. George MacDonald opined that he was a bit overwhelmed with the information in that each proposed project had a different outcome dependent on available funding.

“There are so many ‘ifs’ and ‘maybes’ today that it’s hard to ask questions,” he said.

But the questions would come. In fact, there was no shortage of inquiries as councillors asked about the implications of going ahead with certain initiatives while delaying others.

And while most of the debate was serious, Dist. 4 Coun. Steve Gillespie provided the proceedings with some levity when discussing the lack of paving projects on the books for his constituency.

“If we don’t take a moment to start renegotiating the amalgamation agreement then maybe it’s time the county separate from the CBRM,” said Gillespie, whose district was part of the former County of Cape Breton.

In the end, council unanimously approved the 2019-2020 capital budget, the borrowing of $10.2 million, the withdrawal of $1.4 million from the CBRM’s capital reserve and the in principle approval of the four-year capital plan. The multi-year initiative is dependent on pending funding confirmation from the province that would incorporate federal, provincial and municipal infrastructure commitments necessary for CBRM municipal infrastructure and regulatory wastewater projects by June of this year.

But because there is no guarantee that all requested funding will be approved, council also passed a motion dealing with contingency plans as to what to do in the event that specific initiatives do not receive the necessary funds to proceed. The new Glace Bay police station was among the projects that would proceed without partnership funding as council determined it could use gas tax reserve funds to move the project forward. However, certain projects like the required upgrades to wastewater infrastructure in Glace Bay and Port Morien would be delayed.

Dist. 10 Coun. Darren Bruckschwaiger gave the budget his approval for its focus on repairing and replacing CBRM infrastructure, while also applauding the work of municipal staff in tackling the CBRM’s infrastructure issues without having adequate funding.

“Our infrastructure is in crisis and that’s what we have to concentrate on, that’s the safety of our residents right now, it’s in front of us, and that’s what I believe this budget was about,” said Bruckschwaiger.

“At the end of the day, we’ve made some great changes here as far as work that’s been done — as a community we’ve done anything we could we do with the amount of money that we have.

“When you consider the out-migration and all the issues that we had over the years, and the 5,900 tax accounts that are in arrears, add that all up and I think we’ve done pretty darn good for the amount of money we had.”

Mayor Cecil Clarke wrapped up the meeting by describing the plan as constructive and strategic with a balance of priorities. He also expressed his hope that the province will buy into the CBRM’s proposed four-year capital plan.

“To get the multi-year plan at both a ministerial level and at an official’s level requires a lot of understanding of how to make the pieces come together,” said Clarke.