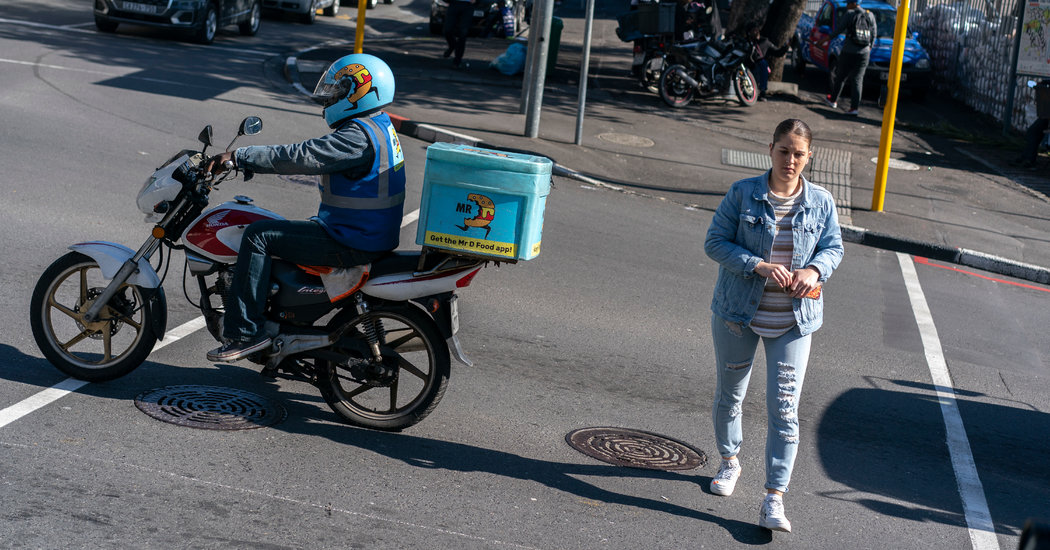 CAPE TOWN — He had delivered his last food order for the evening and was driving home from Pinelands, a suburb in Cape Town, when an oncoming car swung in front of him, knocking him off his motorbike.

Friends and family arrived within 20 minutes, but the motorcyclist, Christian Hakomeyimana, was already dead. A 20-year-old Rwandan migrant, he had been a contractor for Mr. D Food, an online food delivery service popular in South Africa.

“That car hit him so hard,” said Xavier Nshimiyamana, one of his closest friends. The bike, he said, was smashed to pieces — “completely beyond repair.”

Mr. Hakomeyimana’s death in the July 5 crash was just one in a rising number of casualties among food delivery workers in South Africa. The emergence here of food delivery apps like Mr. D Food and Uber Eats has drawn thousands of motorbike riders — predominantly migrants — into poorly regulated and highly precarious work.

Migrants around the world have long signed up for dangerous jobs, but experts warn that the gig economy makes it even harder for the authorities to monitor working conditions and enforce labor laws.

“Food delivery is an inherently dangerous line of work in South Africa,” said Mark Graham, a geography professor at Oxford University who studies the gig economy in developing nations. “Workers put themselves at risk every time they take on a job.”

According to the Motorcycle Safety Institute, a local organization that collects accident statistics, at least 70 delivery riders — most of them food couriers — have died in South Africa over the past year. Hundreds more have been injured.

“As demand for food and small item delivery increases, so does risk to the rider,” said Hein Jonker, the institute’s director.

“The figures,” he said, “are frightening.”

“Business owners have no responsibility to contracted riders,” Mr. Jonker said. “This is a serious matter of exploitation.”

Mr. D Food, which along with Uber Eats controls nearly 90 percent of South Africa’s booming food delivery market, declined to answer questions. The company is owned by Naspers, a global media and technology giant, and recently announced that its order revenues had grown by 170 percent within a year.

A spokeswoman for Uber South Africa, Samantha Fuller, said in response to questions from The New York Times that her company would begin physically inspecting the bikes used by its couriers. This was not done in the past, she said.

Last year, Uber Eats introduced free insurance coverage in South Africa, including for emergency medical care and payouts for death and disability. But the payouts are capped at about $13,000 — and riders qualify for them only when they are on active trips, not if they are returning from a delivery.

Mr. D Food does not offer its couriers compensation for accidents.

Food delivery app workers in other countries are also grappling with poor labor protections. In France, food couriers outsource work to undocumented migrants, siphoning a portion of their earnings. In Mexico, at least five Uber Eats drivers have died on the job in traffic accidents since November.

But in South Africa, the dangers of being a food courier are particularly acute. The country is infamous for its high rates of traffic mortality, with more than twice as many fatalities per 100,000 people in 2016 than in the United States, according to the World Health Organization.

Adding to the danger, many couriers here use fraudulent licenses and fake vehicle registration documents with impunity.

The Uber spokeswoman, Ms. Fuller, said her company put couriers through “a stringent onboarding process.” It requires them to submit valid licenses, vehicle registration documents and work permits before they join the app, she said.

But Ms. Fuller said it was the responsibility of the transportation authorities to detect fraudulent documents.

A spokeswoman for the Cape Town traffic department, Maxine Bezuidenhout, said that her agency did routine checks and that it suspended unroadworthy vehicles, including motorbikes, from operating on public roads. Drivers found with fake licenses and registration documents are charged with fraud, she added.

But the industry, too, should help fix the problem, Ms. Bezuidenhout said.

“One would hope that the companies have a vested interest in the safety of their drivers, but also the public at large, and would therefore put checks and balances in place,” she said.

The driver accused of knocking Mr. Hakomeyimana off his bike was arrested and charged with culpable homicide and drunken driving, said a police spokesman, Andre Traut. The Motorcycle Safety Institute does not have data on how other food courier deaths have been handled by the police.

For young men like Mr. Hakomeyimana, food delivery is an appealing prospect in a country where they have very limited access to the job market. South Africa is inundated with requests for asylum or refugee status, and the wait for work permits can last years.

The pay may be low — couriers seldom pocket more than $330 in a month — but it is simple to sign up online for work, even with forged documents, delivery workers say. More than a dozen agreed to be interviewed, but declined to use their names because they feared their contracts would be revoked.

The only reason so many undocumented migrants do this work is that it can be done without papers, said one undocumented Uber Eats courier from Zambia. But that leaves them vulnerable to exploitation by the delivery companies, he said.

Mr. Hakomeyimana moved to Cape Town in 2017, moving in with an older brother named Pacifique. He began working for Mr. D Food but quit because the pay was too low, becoming a driver with Uber instead, his brother said.

In South Africa, few Uber drivers can afford their own vehicles, instead renting them from partners. In July, the car Mr. Hakomeyimana was using was involved in an accident, and while waiting for it to be repaired, he returned to food delivery.

“I can’t sit around — I need to earn something,” his brother recalled him saying.

He was an experienced rider and owned a bike in good condition, according to his brother, who works as a mechanic. “But even for him, it wasn’t safe,” he said.

At the house the brothers shared in Athlone, a working-class neighborhood near the city, friends and relatives gathered to pray a few days after the accident. A framed portrait of Mr. Hakomeyimana, fresh-faced and neatly dressed, hung in the lounge.

Back in Rwanda he had been a truck driver, hauling cargo across East Africa. If he had died on the job, the company would have been obliged to cover his funeral and pay a lump sum, the mourners said.

In South Africa, his family got nothing.

“They just give you a job, they don’t look after you afterwards,” said Mr. Nshimiyamana, the courier’s friend.

In the same week Mr. Hakomeyimana died, a delivery bike caught fire in central Cape Town; the flames had to be extinguished by city firefighters. At least three more riders crashed within a two-mile radius. Heavy winter rains made driving especially hazardous, but the orders continued pouring in.

A courier from Tanzania witnessed all but one of these accidents. An undocumented migrant, he was involved in an accident of his own in March, badly injuring his knee.

The courier said he crossed the border illegally in 2016, hiding in the back of a truck. In South Africa he purchased false papers and began working for Uber Eats, sending money back home to his mother and younger siblings.

He came upon the scene of Mr. Hakomeyimana’s crash while returning from a delivery, he said. He recognized the body amid the wreckage beside the road.

Since then, he said, he has cut back on his working hours. He needs the money, but is afraid he may be next.