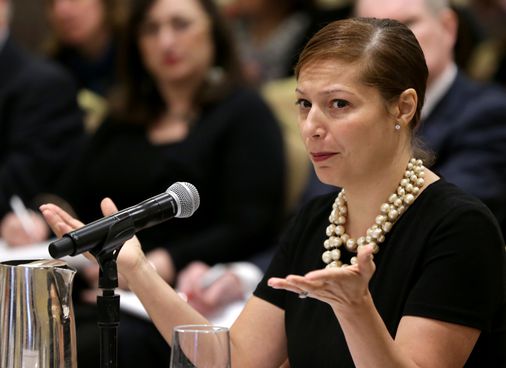 The unannounced early-morning visit to schools throughout the city has become Infante-Green’s calling card, her effort to gain an authentic view of whether students are learning in a district that researchers from Johns Hopkins University labeled as dysfunctional as any they had seen nationwide.

Although the middle school conversation may have been an isolated example, Infante-Green said it accurately reflects the extent of the challenges she has confronted since taking over the state’s largest school system.

From teacher vacancies at nearly every school to crumbling buildings that city leaders have failed to address, the clock is now ticking for Infante-Green to craft a long-term strategy to improve outcomes for the 24,000 students who attend Providence schools every day.

In an exclusive interview to discuss the status of the takeover, Infante-Green told the Globe that in the final weeks of 2019, she expects to release an independent financial analysis on the district’s nearly $400 million budget, hire up to six new high-level employees in the district – including a superintendent – and select a new curriculum for students.

“The challenge is you read about this and you don’t really know what’s going on,” Infante-Green said in that interview, referring to what she’s telling superintendent candidates. “This is a lot bigger than what you think this is.”

Infante-Green came to Rhode Island earlier this year after serving as a deputy commissioner in the New York State Education Department. She maintains she didn’t know the state would take over Providence schools when she accepted the job.

In those early days as she should have been learning where the Chariho regional school district was located and meeting teachers around the state, Infante-Green got a baptism by fire in Providence, a system where nearly 90 percent of students aren’t doing math at grade level.

She announced in April that the team from Johns Hopkins would assess the district. By November, she had stripped Mayor Jorge Elorza, the City Council and the school board of nearly all of their authority and was running the school system herself.

“To be honest with you, every day I learn something new,” she said. “Every day is one new thing. And every time I think I understand, there’s a new layer to it.”

When it comes to the district’s finances, she said accounting firm Ernst & Young will release a full review of city spending in the coming days. She acknowledges that she doesn’t expect the firm to find anything nefarious in the school department’s spending habits, but “what we have been seeing is resources haven’t been placed in the right places.”

She said she has also learned firsthand how hesitant lawmakers outside of Providence are about providing additional funding to the city, so she doesn’t plan to immediately ask the General Assembly for more financial resources.

“In my mind right now, I’m thinking that I’m not asking for any money,” she said. “But that’s right now. I don’t know how things will change. It’s also about how fast we want to move.”

The superintendent search has slowed after Infante-Green initially said a new school chief would be in place by Nov. 1. She previously told reporters that she had made an offer to a superintendent from outside of the state, but the hire never moved forward. She has declined to say whether the candidate turned down the job.

Because she hasn’t found a permanent leader, she has deferred to interim Superintendent Fran Gallo to run the district. But she has also inserted Art Nevins, a former advisor to Governor Gina Raimondo, as the chief of staff for Providence schools. She said she still plans to hire other top aides, including someone to oversee the city’s high schools.

On curriculum, Infante-Green said she hopes to select a reading and math program that can be implemented at the elementary and middle school level beginning next school year. In the meantime, she said she’ll ask the company she selects – she has unilateral authority to make that decision – to begin providing professional development to teachers for free during the current school year.

“This is one of the biggest things happening nationally,” she said, referring to the state takeover of Providence schools. “If we fail, and it’s their curriculum, that looks bad for them.”

As the calendar turns to 2020, she plans to begin negotiating a new contract with the Providence Teachers Union. Although union leadership has been receptive to meeting with Infante-Green, no changes to the current agreement have been proposed.

And while Infante-Green acknowledges that she has no intention of supporting a large-scale expansion of charter schools in the district, she said she isn’t opposed to adding more charter school seats in Providence. She has already convinced Elorza to back off his opposition to a growth plan at the Achievement First Mayoral Academy, one of the best-performing schools in the city.

“You know who thinks that parents shouldn’t have options is people that do have options,” she said.