No, Politics Won’t Take a Break for the Virus 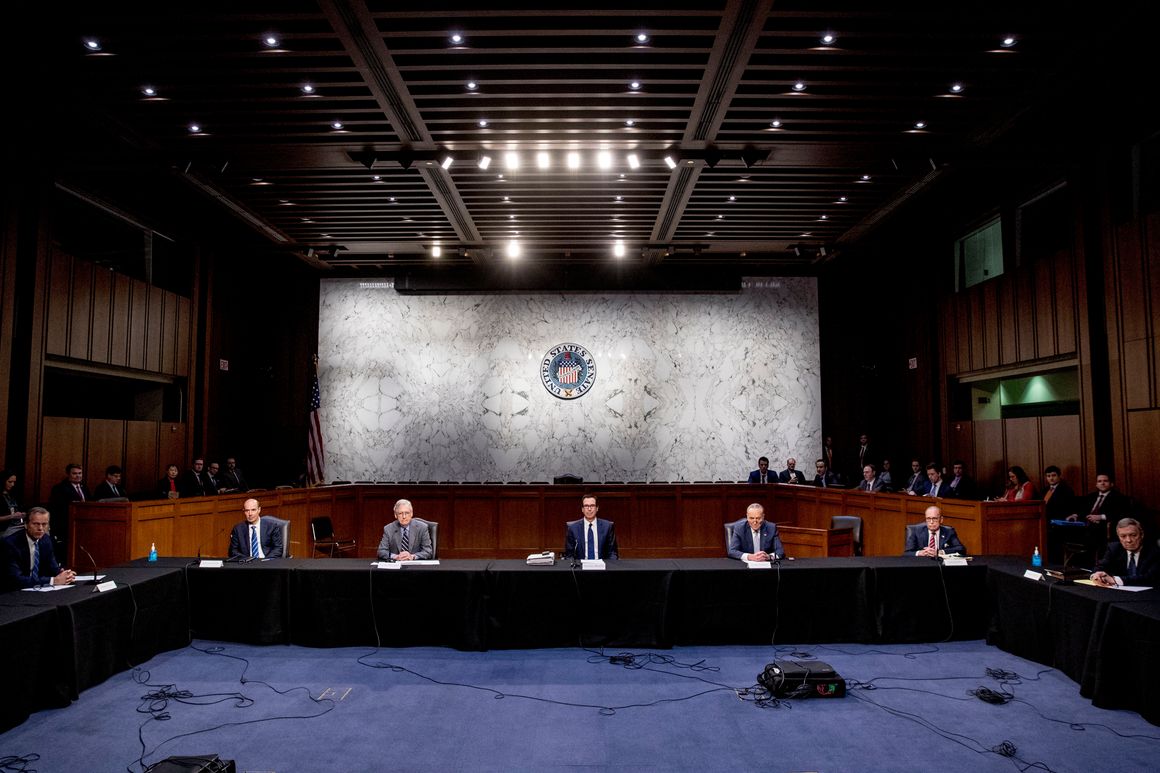 No, Politics Won’t Take a Break for the Virus

Trump, for his part, reportedly wants to establish himself in the crisis as a “wartime president,” above the fray, but can’t resist stopping to tweak his own rivals, from Joe Biden to Mitt Romney.

Is this the way the U.S. government is supposed to behave in the face of a grave threat to the nation—spending days in partisan rancor before finally hammering out desperately needed legislation in the dead of night? In a national crisis, isn’t politics as usual supposed to be put on hold?

It might be tempting to invoke the notion of “good old days,” when politics stopped at the water’s edge, when an endangered nation put political differences aside for the sake of national unity. But those yearnings should be put on hold. More often than not, the story of America is one where political divisions don’t really hit the pause button—even in the face of war, disaster or economic catastrophe. For every example of a move toward unity in a crisis, there’s a countervailing example, or two or three, where political divisions run deep and wide, and in some cases, deeper and wider. Counterintuitive though it might seem, it may be a sign of civic strength that these divisions, bitter as they sometimes are, can be openly expressed even at a time of peril.

Even in crises that have seemingly called for putting politics aside, unity has come, when it has, only briefly—and the nation still pulled through on the other end. Yes, it’s true that in the middle of the Civil War, as a gesture of national unity, President Abraham Lincoln put a Democrat—Tennessee’s military governor and former senator, Andrew Johnson—on his ticket when he ran for reelection in 1864. (Given Johnson’s disastrous white supremacist presidency, that might have been Lincoln’s worst decision ever).

But that election was awash in party strife, even beyond the obvious bloody division between North and South. Many Northerners, anxious for a quick end to the war, embraced the candidacy of George McClellan, the Union general whom Lincoln had fired for timidity. At the same time, many Republicans opposed Lincoln’s half-hearted approach to slavery—so much so they nominated John Fremont for the presidency (Fremont ultimately declined to run). Overall, the mood of the nation was sufficiently sour that Lincoln himself assumed he would lose reelection; in the end it was military victories that helped win Lincoln a landslide, and with it the appearance of national unity.

Yes, Franklin D. Roosevelt looked for bipartisan support in 1940 as he prodded a reluctant nation to mobilize and to assist Great Britain in the face of a relentless Nazi bombing campaign. He named Herbert Hoover’s secretary of State, Henry Stimson, as Secretary of War, and Frank Knox—the GOP vice presidential candidate in 1936—as Secretary of the Navy. And his 1940 foe, Wendell Willkie, was a supporter of mobilization and gave FDR crucial support in launching peacetime selective service.

But having Willkie there didn’t keep the White House from coming under heavy fire from the strong isolationist wing of the GOP. At the end of October, a Republican radio broadcast proclaimed: “when your boy is dying on some battlefield in Europe, and he’s crying out ‘Mother! Mother!—don’t blame President Franklin D. Roosevelt because he sent your boy to war—blame yourself, because you sent Franklin D. Roosevelt back to the White House!”

Surely, though, after the bombing of Pearl Harbor in December, 1941, the nation came together, right? Well, the America First Committee, Charles Lindbergh’s platform for isolationism, disbanded quickly, and only one member of Congress voted against the declaration of war. But less than a year later, Republicans gained in the 1942 midterms by campaigning against America’s wartime president, capitalizing on the gloomy news from the war and from domestic discontent over the heavy hand of government. That November, Republicans gained 47 seats in the House and nine in the Senate.

The partisan fires raged much hotter in the 1950 midterms, just months after U.S. forces began fighting in Korea. Sen. Kenneth Wherry of Nebraska said of President Harry Truman, “The blood of our boys in Korea is on his shoulders, and no one else.” The Republican National Committee built its midterm campaign around Democratic “blundering” in Korea. And the Republicans were already campaigning against the Truman administration for its indifference to—if not outright sympathy with—Communists. Earlier that year, Wisconsin Sen. Joseph McCarthy had charged in a speech in Wheeling, West Virginia, that there were some 200 “known Communists” in the State Department. “Who lost China?” became a theme of Republican campaign rhetoric, and the Republican Party wound up winning 28 House seats and five Senate seats that year. And two years later, as the Korean War sunk into quagmire, the entire 1952 GOP campaign was encapsulated as “K1C2” slogan: “Korea, Corruption, and Communism.”

Vietnam, of course, is remembered as the war that split the nation, but the discontent was brewing well before 1968. As early as October 1965, Ronald Reagan, preparing to launch his campaign for governor of California, was arguing from the right that Lyndon Johnson wasn’t pushing hard enough. “We should declare war on North Vietnam. We could pave the whole country and put parking stripes on it and still be home by Christmas,” Reagan said. At the same time, opposition to the war was growing within the Democratic Party. By 1966, Senate Foreign Relations Committee Chairman William Fulbright was holding hearings questioning the rationale for the war, and Senator Robert Kennedy, among other Democrats, was publicly expressing doubts about the war. By 1968, it had effectively split the party.

As for the Republicans: Just before the November election, the campaign of Republican nominee Richard Nixon surreptitiously persuaded South Vietnam’s leaders not to agree to an election eve peace proposal—not just undermining the current president, but leading Republicans like George Will, among others, to subsequently label it “treason.”

If you’re looking for examples of genuine unity, you can point to the atmosphere after the attacks of September 11, 2001, when, as in the days just after Pearl Harbor, there was a real sense of patriotic fervor. That sense even survived the initial decision by the Bush Administration to invade Iraq—the House approved the use of force by a 296-133 margin and the Senate vote was 77-23. But, as with Korea and Vietnam, the setbacks in the field took a political toll. What helped save Bush’s re-election was a distinctly unsubtle campaign suggesting that a John Kerry presidency would subject the nation to another terrorist attack.

You might also look at who happened at the end of the 2008 campaign, in the wake of the financial meltdown. Both major party nominees—John McCain and Barack Obama—joined President George W. Bush and others at a white House meeting to shape a common response. But even with the entire global economic structure at risk, politics was never far from center stage. When the $700 billion measure came to the House floor, two-thirds of Republicans voted against it, sending the proposal down to defeat. Only after the stock market suffered its biggest drop in history did the House reverse itself four days later. President Obama fared a little better in putting together his own plan for economic recovery. His $838 billion stimulus plan won only three GOP votes in the Senate, despite the inclusion of a large chunk of tax cuts. Senate Minority Leader Mitch McConnell said: “It’s full of waste” and “we’re taking an enormous risk, an enormous risk, with other people’s money.”

So why should anyone express surprise or dismay at a fight over what to do about what might be the most dangerous crisis in our history? The arguments in the Senate over the bailouts and rescue packages reflect deep ideological divisions about where to direct resources, whether to aim them at afflicted companies or workers; other debates revolve around everything from abortion policy to climate change to health care. And is anyone really surprised that Democrats might not embrace the idea of half a trillion dollars to be dispensed at the discretion of the most polarizing president in history, or seek to block him and his family from profiting from the massive rescue package?

It says something about the staying power of America’s political institutions that they can sustain fierce partisan and ideological arguments even while the nation is under siege. And even when a free society puts aside the mechanisms of political conflict, they do not remain neglected for long. When Winston Churchill became prime minister of the United Kingdom in 1940, he quickly formed a broad coalition government, which included Clement Atlee, leader of the Labour Party. There were no elections at all until after V-E day, five years later. There, you might say, that is what national unity looks like. But barely two months after V-E day, the British people pushed Churchill out of office in a landslide.

As soon as the bombs stopped falling, politics emerged as strong as ever. And that rapid resumption of partisan battle was as powerful a demonstration as any that one of the foundations of free society—open, freewheeling, raucous debate—was alive and well. Here at home, the same clashes in the Senate that triggered angry words may well have produced a piece of legislation a lot better than one that had been rushed to passage without contentious unity. To paraphrase John F. Kennedy, sometimes—even in crisis—unity asks too much.