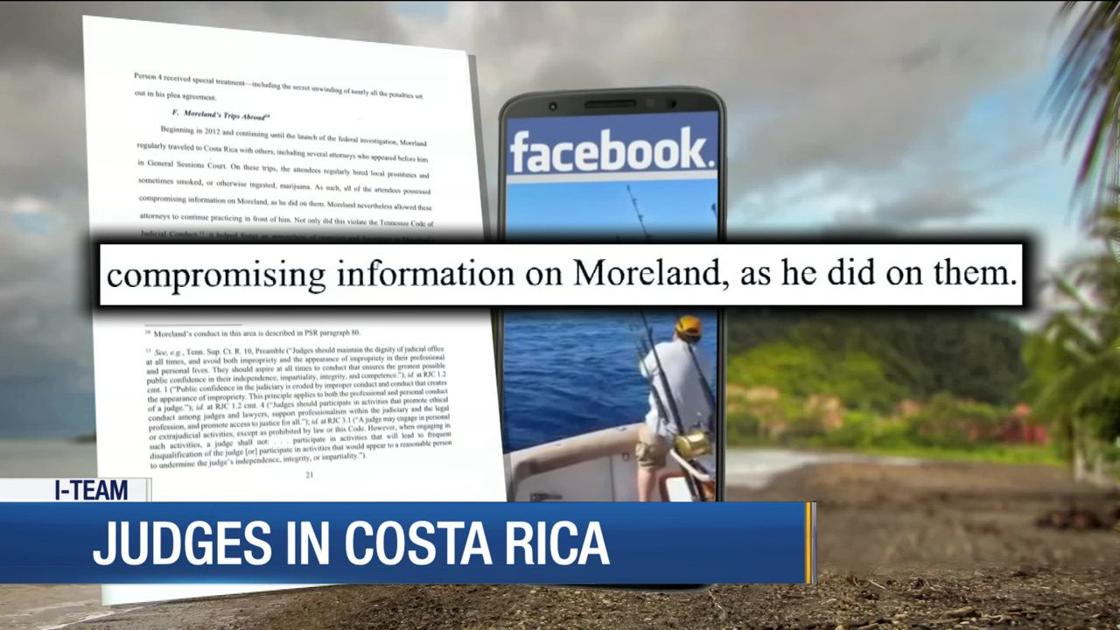 Before former Davidson County General Sessions Judge Casey Moreland was sentenced to prison last year on corruption charges, he gave a two-day interview to the FBI and federal prosecutors. Moreland’s own attorney confirmed it.

One of the topics Moreland covered, according to court documents, was Moreland’s trips to Costa Rica with friends.

According to sentencing documents written by federal prosecutors, Moreland said attendees hired local prostitutes and sometimes smoked marijuana in  Costa Rica. The court documents do not identify which attendees allegedly engaged in that conduct.

The News 4 I-Team obtained travel records from the Costa Rican government that show several Nashville attorneys and judges entered and left Costa Rica during the same dates  Moreland was there.

According to those documents, in 2013, General Sessions Judge Aaron Holt entered and left Costa Rica on the same dates as Moreland. Holt declined to talk about Costa Rica with the News 4 I-Team’s Nancy Amons.

“I don’t have anything to say about that. Thank you!” Holt told Amons.

Travel records from Costa Rica also show that Criminal Court Judge Monte Watkins was in Costa Rica at the same time as Moreland on two occasions, once in 2013 and once in 2016. The 2013 dates also overlap the dates of Holt’s visit.

The US Attorney’s office wrote in court documents that Moreland’s Costa Rica travel with the attorneys who appeared before him in court not only “violate the Tennessee Code of Judicial Conduct, it helped foster an atmosphere of cronyism and favoritism in Moreland’s courtroom,” saying that  “attendees possessed compromising information on Moreland, as he did on them.”

Lewis, court cases show, represented more than 42 defendants before those three judges between 2013 and 2016.

“I can’t comment about anything, Nancy,” Lewis told Amons.

On the December 2016 trip, Costa Rican records show, a prosecutor from the Davidson County District Attorney’s office, Ben Ford, was in the country on the same dates as Lewis, Moreland, and Watkins.

Ford was assigned as the assistant district attorney in Judge Moreland’s court.

District Attorney Glenn Funk verified that after he learned his assistant DA, Ford,  was on the trip with Moreland, Ford was disciplined. His pay was cut by $12,000.

The News 4 I-Team cannot independently confirm what did or didn’t happen  in Costa Rica, or who might have been involved. Only the attendees know. Exactly what Moreland told the FBI about the trips isn’t public record. The US Attorney’s Office would not comment outside of anything in the court file.

There are two boards in Tennessee that have the power to discipline lawyers and judges, but their investigations are secret unless they take official action, for example, issuing a public reprimand.