More Than Politics In The Air In Blair Township 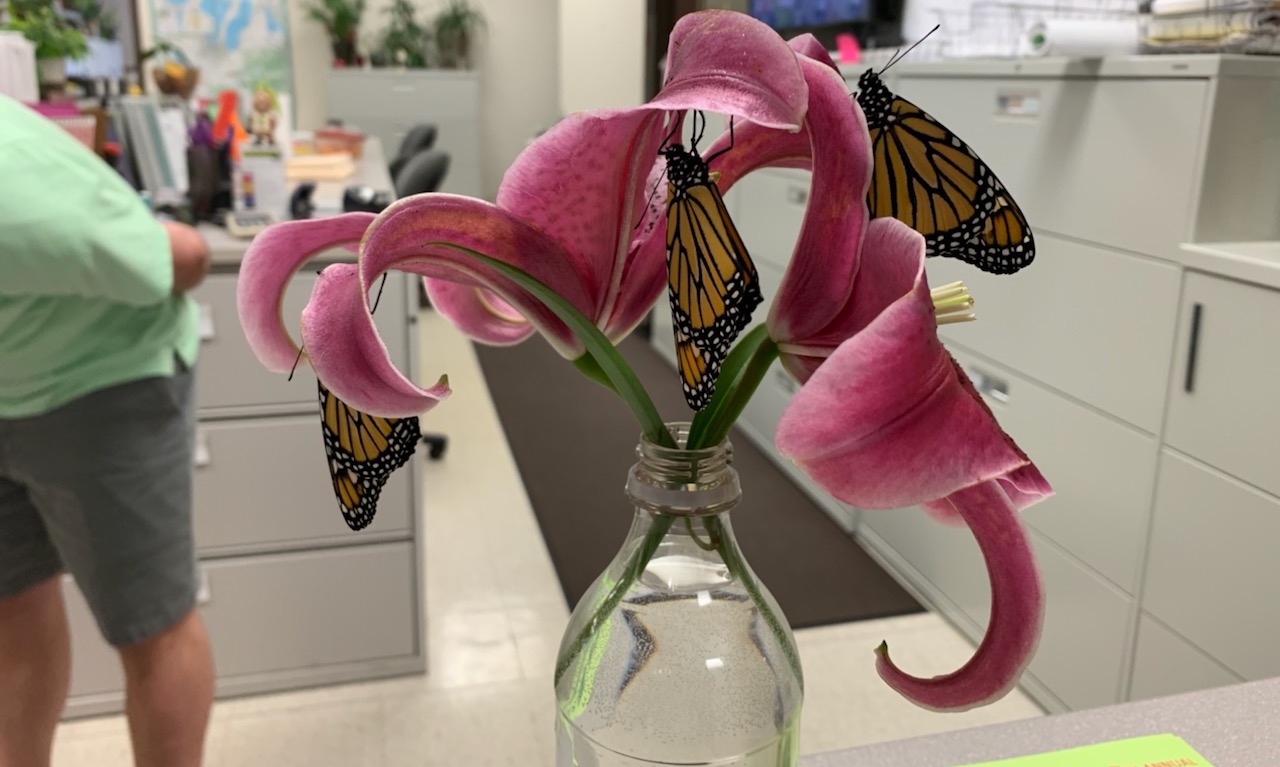 More Than Politics In The Air In Blair Township

Visitors to the Blair Township Hall might be surprised to see a small mesh tent in the office – and even more surprised when they see what’s inside it. Township Supervisor Nicole Blonshine, a longtime advocate for monarch butterflies, has taken her personal obsession to a new level: She has established a monarch hatchery in the township hall.

“It started as a fun hobby about 20 years ago,” says Blonshine. “It took off. Everybody in the building is hooked on it.” That includes members of the Blair Township Emergency Services Department, housed in the same building. “We’re connected to the fire department, they’re into it, and their children are into it.”

Everybody seems to be into it, including staff and visitors. And it’s a good thing, considering the important role monarchs and other butterflies play inagriculture and the environment. Several plant species, like milkweed and many other wildflowers, depend on butterflies to transfer pollen.“They are the second-most important pollinator on the planet behind bees,” says Cyndie Roach, curator at the Grand Traverse Butterfly House and Bug Zoo.

In addition to their role pollinating plants, butterflies and caterpillars are also an important source of food for other animals such as bats and birds.

But monarch populations are in decline; they face peril from a number of directions, including loss of breeding habitat, weather and climate change, predators, pathogens and parasites, and less overwintering habitat in Mexico.

Though not listed as an endangered species, their migration was listed as an endangered phenomenon in 1983. While monarchs typically live two to six weeks, the last generation born in the late summer migrates south to Mexico, where they winter, before flying north again to lay eggs for the next generation before they die. “Monarchs make such an incredible journey,” says Roach.

Yet they’re entirely dependent on one plant: milkweed. Blonshine says the use of pesticides and herbicides both endanger monarchs, as the latter often impacts milkweed, and no milkweed means no monarch eggs. That’s why Blonshine, Roach and others are so dedicated to providing monarch caterpillars with food and habitat before releasing them into the wild.

Roach says she’s always happy to help point people to  local or online sources where they can get their own milkweed to attract monarchs. She says the most important thing is to make sure the plants have not been treated with any type of pesticide.

So the tent at Blair is filled with milkweed. “It’s the only thing they’ll eat,” says Blonshine. That’s why the butterfly lays its eggs on the plant, which Blonshine says typically hatch in about three days. The caterpillars take about ten days before they pupate, and it’s another ten to 14 days in the chrysalis before the new monarch butterfly emerges.

Of course, in the case of Blair Township, it’s butterflies plural. Blonshine says the goal this year was to release 100 butterflies. As of this writing, the total is already well past that number, and she thinks they will total 200 butterflies this year.

Blonshine and Roach are part of a growing group of monarch enthusiasts. There’s a move afoot to name the monarch butterfly the state insect. Michigan is one of only two states in the country to not have an officially designated state insect (Iowa is the other).

Last year was the first time Blonshine took her butterfly infatuation to her workplace. “Some people thought I was crazy, a couple thought it was interesting.” But it didn’t take long for the idea to take hold. “Then they were naming them. As soon as you witness a butterfly hatching you’re addicted.”

She loves passing the passion on. She posts the releases on Facebook and has residents and visitors stopping by. When children come in, Blonshine likes to send them home with a caterpillar and milkweed.

Blonshine says she has even bigger plans for next year. “I want to enclose the whole area. We had some caterpillars escape – there are four on the ceiling.”