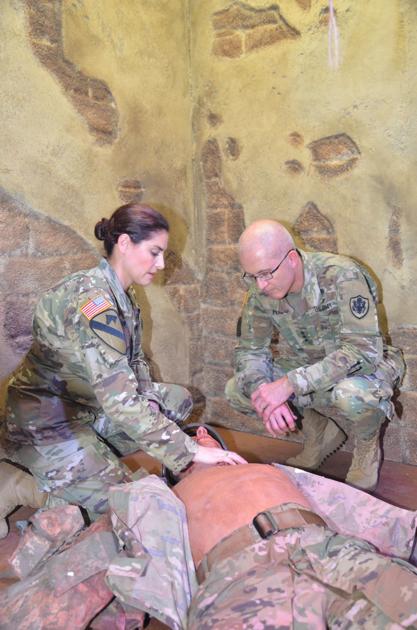 The new leader of the Defense Health Agency visited Fort Carson’s Evans Army Community Hospital this month as part of a tour of bases ahead of the biggest military health overhaul in decades.

Army Lt. Gen. Ronald Place, who was sworn in as director of the DHA in September, said the tours are meant to help familiarize him with the people, resources and needs at each base as the military’s medical services are merged into a single system.

“My goal is to know what’s unique about here, so that as we standardize this sort of system, what things are really appropriate to be standardized?” said Place, who succeeded retired Navy Vice Adm. Raquel Bono as DHA director in September. “What things need to stay unique in particular locations, and how do we balance those things to gain more effectiveness of our health care delivery teams?”

The Defense Health Agency was founded in 2013 to combine Army, Navy and Air Force medical services with a goal of improving access to best-quality care for members of the military and their families, lowering costs and ensuring a “medically ready force” at all times.

The multiphase and far-reaching transition — which will roll out to almost 700 military hospitals, centers, medical and dental clinics nationwide — began six years ago with some facilities in the Washington D.C. area and is expected to expand to existing “multiservice markets” such as Colorado Springs starting early next year.

Units of the Army and Air Force in Colorado Springs operate on an “administrative collaboration,” so there’s a history of working together. True integration, as envisioned under DHA, though, is more than a symbiotic relationship among military health providers, Place said.

“Partnership is we’re separate, but we agree to do certain things together. Integration means you’re working everywhere all the time. Every patient is potentially eligible to go to any location at any time. It’s like it’s all one unit,” he said.

A board-certified surgeon with 33 years’ service as an Army medical officer, Place said the transition to the new system under DHA doesn’t include plans to change staffing models in the Springs, and won’t bring “drastic (personnel) cuts, anywhere.”

“That’s the most common question I get, everywhere I go, and that makes sense. Health care is a very personal thing for people, and those who work in health care, their commitment to what they do is also very personal,” he said. “Any reductions will be transparent. Second, we anticipate them to be relatively small. Third, we expect it to be very gradual, over a course of years.”

Depending on need, staffing could in fact go up.

It was announced this month that the Space Force, America’s first new armed service since the founding of the Air Force in 1947, would be based in the Springs.

The new branch, which is part of the Air Force, will have about 15,000 troops.

“I recognize the plan of the Department of Defense to have more service members here and families associated with those service members, so I do anticipate more people that we’ll be responsible for,” Place said.

“Exactly what capabilities are within this hospital or within the clinics in the area, we haven’t made any decisions about.”

“Health care is a very personal thing for people, and those who work in health care, their commitment to what they do is also very personal.” Lt. Gen. Ron Place, Defense Health Agency director