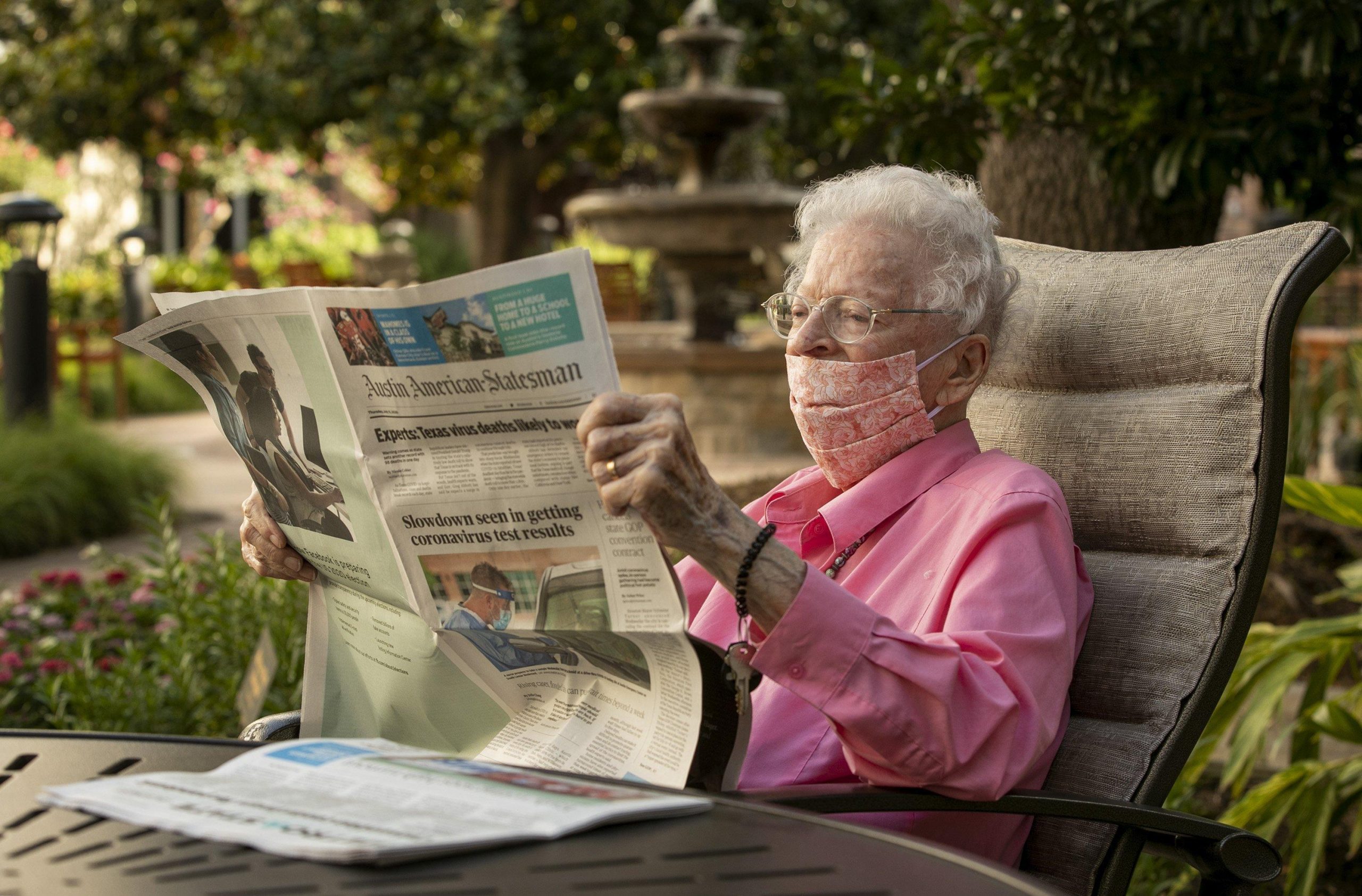 Shudde Fath has read approximately 45,000 copies of the Austin American-Statesman.

That’s because she and her then-newlywed husband, Conrad Fath, first subscribed to the paper at their garage apartment near the University of Texas campus in January 1939.

“Been taking the paper ever since,” Fath, 104, says with a laugh. “One big thing back then is that we used to get two papers a day: the American in the morning and the Statesman in the evening. We’d read both.”

The paperboy — she thinks that all the carriers were boys in the 1930s — collected the amount in cash at the end of the month.

“We didn’t write them checks,” Fath recalls. “And, of course, there were no credit cards.”

Born in 1916, Fath grew up in a newspaper-reading family. Her father, Dr. J. Gordon Bryson, M.D., contributed a weekly anonymous column to the Bastrop Advertiser.

In 2011, Shudde Fath and her daughter, Betsy Fath Hiller, compiled a book, “The Greatest Generation: As Reported in the Weekly Bastrop Advertiser During World War II,” which consists of letters home from people in military service that had been published in the local paper. The compilation of 727 short articles about 390 men and five women in the military tell the reader a lot about the war and the homefront; 34 of the men lost their lives, and eight became prisoners of war.

Shudde — the name rhymes with Judy — did not take a city paper during her college years in the late 1930s, but she read the free Daily Texan.

“At UT, we lived in a sort of bubble,” Fath says. “We were not keeping up with the town, but with the campus.”

During the period between 1924 and 1987, why would anyone in Austin read both editions of the city papers — the combined American-Statesman came out on Sundays — all published by the American Publishing Company?

“Whatever happened during the day, it was in the paper that night,” Fath says. “I don’t know when the evening deadline was — maybe 2 p.m.”

She doesn’t mind that these days the news deadlines for the current morning American-Statesman print edition are so early, much of the news has already been reported on the paper’s three websites.

“Glad to have it,” Fath says. “My eyesight is terrible, and it’s hard to see. I’ve got a magnifying-light thing that helps.”

She has a theory as to the demise of the evening Statesman in 1987.

“It was hard to deliver them with all the traffic,” Fath says. “For the morning paper, nobody was on the roads.”

In fact, reading habits had also changed. Readership for separate evening papers had declined steadily. In 1982, the total circulation of morning newspapers for the first time had surpassed the total circulation of evening newspapers, which had been dominant since the 1940s. Instead, “all-day” papers like the American-Statesman printed and sold multiple editions of the basic morning paper daily.

Among her favorite reporters have been those who filed “people’s columns” that tell the stories of the city and its culture.

“John Bustin was a good one,” she says of the entertainment journalist whose tenure at the paper ran from the 1940s to the 1970s, after which he wrote regularly for other papers — and appeared inimitably on the radio — until he retired in 1994. He died in 1998.

Bustin had inherited the “amusements reporter” title, taken from the old-school name for the arts and entertainment section of the paper, a charming title that this reporter also inherited, at least as listed for years on newspaper budgets.

“Sue Brandt McBee was one of them,” Fath says about the columnist and social leader who was married Frank McBee, one of the founders of Tracor, among Austin’s first tech breakouts. Sue McBee was a tireless civic worker until she died in 2012. “We knew all of them because the town was so little.”

Fath, who worked for what is now called the Texas Workforce Commission, and her late husband followed the workings of power in Austin.

“I was always interested in city issues,” says Fath, who had called the American-Statesman’s editors from her Westminster retirement community to share her election views the day of this interview in early July. “I’m sure I got after the reporters and editors about things back then, too. Me and Dorothy Richter.”

The recently deceased Richter, known informally as the “Mayor of Hyde Park,” began her long career as a community activist just as Fath did, by saving an old but crucial fire station.

“The paper used to be more conservative, editorially,” Fath says. “Then there was that editor who kind of livened up things — Arnold Rosenfeld. He held an open house meeting. It was an auditorium full of people. All of us liberals — so-called — told him everything they were doing wrong. He took the punches. And he kept up a dialogue.”

A finalist for a Pulitzer Prize for commentary while a columnist for the Dayton Daily News, Rosenfeld served as executive editor at the American-Statesman between 1984 and 1988. After the Statesman, he moved over to the Atlanta Journal-Constitution, a sibling paper, then eight months later become chief editor for Cox Newspapers. Rosenfeld retired in 2000 and died in 2005 at age 72.

How did Fath get up to approximately 45,000 copies? Remember, for 48 of those 81 years, she received two papers a day, except on Sundays.

“I have never suspended my subscription like people do when they travel,” Fath says. “Not that we did a whole lot of traveling. We always got someone to hold the paper so I could read them when I got back.”