McFly’s Tom Fletcher creates a rock band with his sons Buzz, 6, and Buddy, 4, during coronavirus lockdown – The Sun 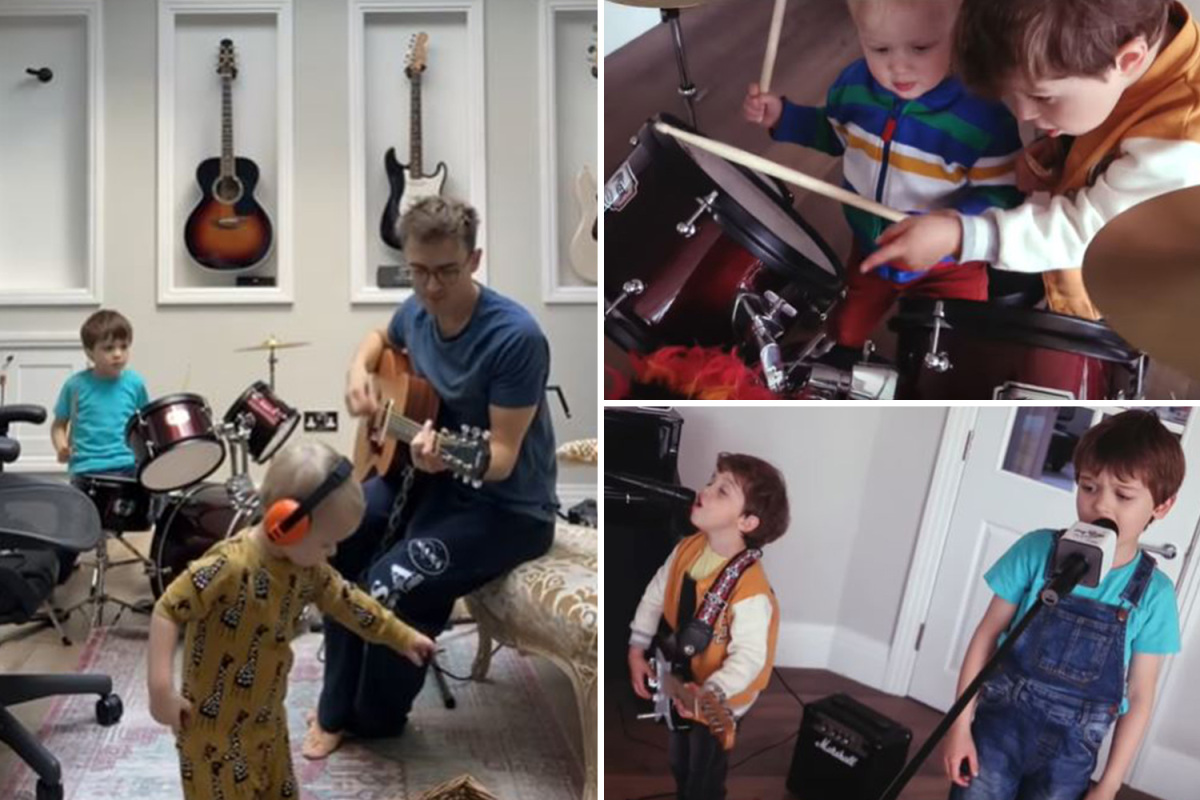 McFly’s Tom Fletcher creates a rock band with his sons Buzz, 6, and Buddy, 4, during coronavirus lockdown – The Sun

MCFLY’S Tom Fletcher has created a rock band with his sons during coronavirus lockdown.

The dad-of-three has been keeping himself busy at home and putting his talent to great use with Buzz, six, Buddy, four, and one-year-old Max.

Tom Fletcher creates a rock band with his sons Buzz and Buddy during coronavirus lockdownCredit: YouTube

Tom took to Instagram to show off the four minute video to his 1.8m followers.

“Thought I’d share one of our “lockdown projects” that we’ve been working on with the kids while we’re all staying home during these tough times. We had a blast making it (or watching the kids make it) and hope it puts a smile on your face.
“The song was picked by Buzz as its one of his favourites from Cars 2 called You Might Think.

“Hope you’re all safe and finding your own ways to keep yourself and the kids happy and busy at home.”

The adorable video starts with Buzz explaining that they’ve been working hard over the last two weeks to record their new song.

“Hello, I’ve been recording music for the last two weeks,” he says.

The camera then pans out on the Fletcher’s family home, which has a range of musical instruments dotted around the pad, including loads of guitars, maracas and a piano.

Buzz takes centre stage during their performance and rocks out in style – who obviously gets it from his pop star dad.

The video also displays an insight into what it was like behind the scenes – with clips of the boys messing around, cuddling and having their lunch after working up an appetite.

Buzz adds: “My band’s name is called Buxsy and that’s all of my brothers names!

The youngsters have clearly inherited their musical talent from their dad, who is one member of popular boyband McFly.

The McFly boys shot to fame in 2004 when fellow boy band Busted helped launch them by inviting them to tour in 2004.

They band have gone on to win numerous awards, create chart topping music and even appear in Hollywood blockbusters.

In 2013 they announced that they would join forces with Busted to create a “supergroup” McBusted, alongside a 34-date tour performing their most popular songs.

In 2018 the foursome went their separate ways to focus on their solo careers, but last year drummer Harry confirmed to The Sun Online that the much-loved band would reunite for a new album.

When Tom isn’t in the studio he also films vlogs for his popular YouTube channel, which has more than 600,000 subscribers.

Among his videos, pregnancy announcements and clips with his kids have drawn most interest to the channel.

Like his best-selling wife Giovanna, Tom is also a popular children’s author and released The Christmasaurus in late 2016, and There’s a Monster In Your Book in 2017.

Tom and his family have been keeping safe and found the best was to keep themselves occupied during lockdown.

It comes after NHS figures suggest more than 1.7million Brits may already have been infected by coronavirus.

The current death toll in the UK is at 2, 352 and is expected to peak over Easter.