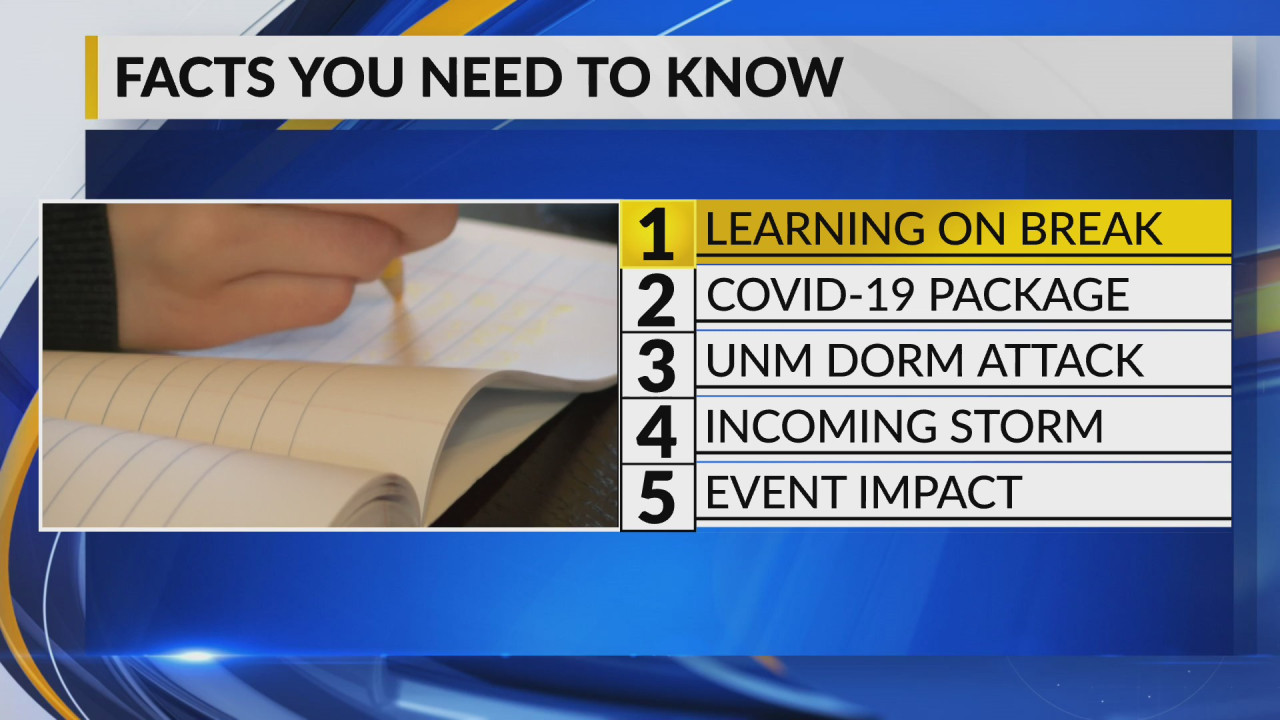 1 As the number of confirmed cases of COVID-19 in New Mexico sits at 23, students across the state remain out of the classroom. Now, parents in the state’s largest school district are asking for guidance on what their kids should be doing during the three-week closure. For now, New Mexico’s Public Education Department says school districts don’t have to require learning during this time and that children are not expected to complete schoolwork. The Deming superintendent started a Facebook live series reading books, encouraging families to discuss the story together. At Belen Family School, teachers are handing out lesson plans to parents at a drive-thru set up. Some Albuquerque Public School teachers are sending out information to parents while there is also a list of resources on the district’s website.

2. Coronavirus cases are now in all 50 states and the death toll has now surpassed 100. This comes as the president is working with the treasury secretary on a massive economic stimulus package to avoid a recession. For Americans, many who are out of work because of the outbreak, the trillion-dollar package could mean direct payments of a thousand dollars in two weeks. The White House is still looking into if a possible income cap will be used to see who’s eligible.

3. An Albuquerque man is in custody for allegedly attacking a woman on UNM’s campus. Around 6 p.m. on Tuesday police say a woman was walking out of her dorm room at Hokona Hall when a man tried to push her back inside. At one point, he got on top of her and covered her mouth as she screamed. She was able to fight back and get away. The suspect ran away but was later arrested.

4. This morning is starting out clear and calm, with no weather worries! Light flurries are coming down in the San Juans but won’t cause any issues for the AM commute. The first half of the day is looking nice with sunshine, but the messier weather moves in for the afternoon through tonight. Rain and thunderstorms will move into southern New Mexico by around 12 PM, and the rain pushes north through the afternoon.

5. One of the first New Mexico industries impacted by coronavirus-related shutdowns is begging customers to not cancel events but instead to postpone them. From decorators, caterers, event planners, florists, and DJs March and April is one of the event industry’s busiest times. As proms and graduations are up in the air, businesses are unsure of the future and say one event can impact several businesses. One decorator says, for now, most of her spring contracts are postponing. She hopes others will consider doing the same to help keep their businesses afloat.