Malaysia: Between education and skills 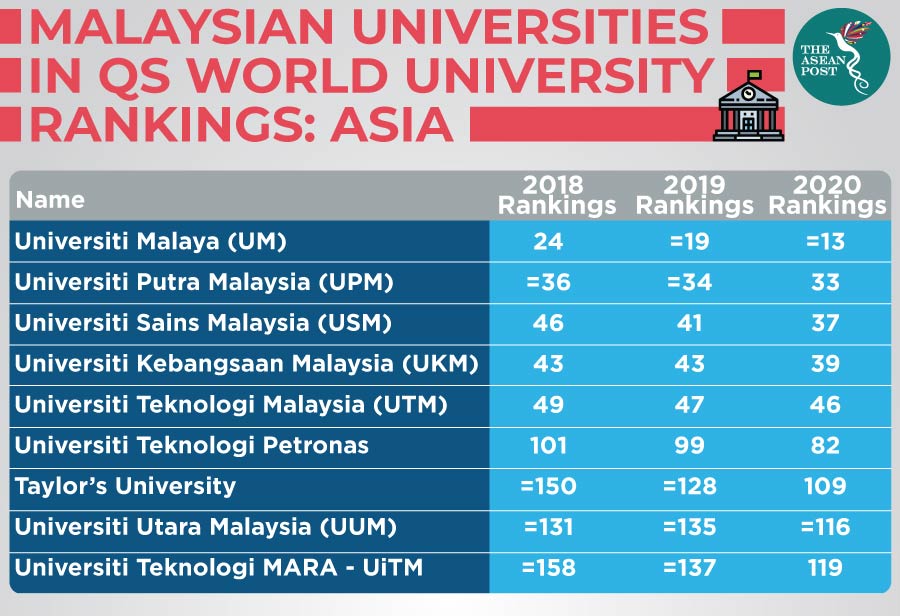 Malaysia: Between education and skills


Malaysian universities will be revelling in their rise up the QS (Quacquarelli Symonds) World University Rankings: Asia after five of the country’s institutes of higher learning cemented their places in the top-50.

The country’s oldest university, Universiti Malaya climbed five places in the latest rankings and is now tied with the University of Tokyo at 13th – its highest position to date in a list which has been published annually since 2004.

The National University of Singapore (NUS) topped the Asian rankings for the second straight year, with Nanyang Technological University (NTU) and the University of Hong Kong finishing second and third respectively.

Released on Wednesday, the list ranked over 550 universities in Asia based on factors such as academic reputation, employer reputation, faculty-to-student ratio, international research network, citations per paper, papers per faculty and number of faculty staff with doctorates.

Although the surge in the rankings may indicate that Malaysia’s higher education system is faring better than ever before, such accolades are meaningless if the students from these universities cannot find jobs once they graduate.

Graduate unemployment in Malaysia was approximately 204,000 in 2017, making up 40.5 percent of total unemployment. In the past, bodies such as Malaysian Industrial Development Finance (MIDF) Research, a statutory body under the Ministry of International Trade and Industry, observed that Malaysia’s high youth unemployment rate – which hit a record 13.2 percent in 2018 – was likely due to skills mismatch.

As the country’s central bank noted in its 2018 annual report released in March, there are more graduates in the country than there are jobs for them.

While Bank Negara Malaysia (BNM) found that the number of diploma and degree holders in the labour force increased by an average of 173,457 people per year from 2010 and 2017, the net employment gains in high-skilled jobs was only 98,514 people per year.

“This suggests that the economy has not created sufficient high-skilled jobs to absorb the number of graduates entering the labour force,” stated the report.

Last year’s annual Labour Force Survey conducted by the Department of Statistics Malaysia seem to back up BNM’s claim after it found that only 27.2 percent of the country’s workers were engaged in high-skilled employment in managerial, professional or technical roles. The large majority of the country’s 15.3 million labour force, or 60.4 percent, were semi-skill workers and low-skilled workers made up the remaining 12.4 percent.

Malaysia’s Khazanah Research Institute (KRI) noted in a study released last December titled ‘The School-to-Work Transition of Young Malaysians’ that 95 percent of young workers in unskilled jobs and 50 percent of those in low-skilled manual jobs are over-qualified for these occupations, and while BNM has called for the government to create more high-skilled jobs, perhaps the solution in graduate unemployment lies elsewhere.

Many Malaysian graduates possess poor English proficiency and there is a general disinterest in STEM (Science, Technology, Engineering and Maths) subjects – both of which hinders their ability to secure high-skilled jobs upon graduation.

Only about a third of all students at upper secondary and tertiary levels are enrolled for STEM related subjects – well below the government’s 60:40 target ratio for science to arts students.

KRI’s research also points out that there is a serious mismatch in the qualifications awarded by education institutes and the skills required by employers.

While Malaysian education and training institutions emphasise academic and professional qualifications, employers are looking for other things.

A KRI survey of Malaysian employers last year found that soft skills – such as creative thinking, flexibility and teamwork – were more important than work experience or hard skills.

In addition, the lack of emphasis on lifelong learning to adapt to the rapidly changing nature and world of work only widens this mismatch.

Rather than focusing solely on academics, perhaps Malaysia’s universities should start paying more attention to developing the abilities that help their students gain employment once they graduate.