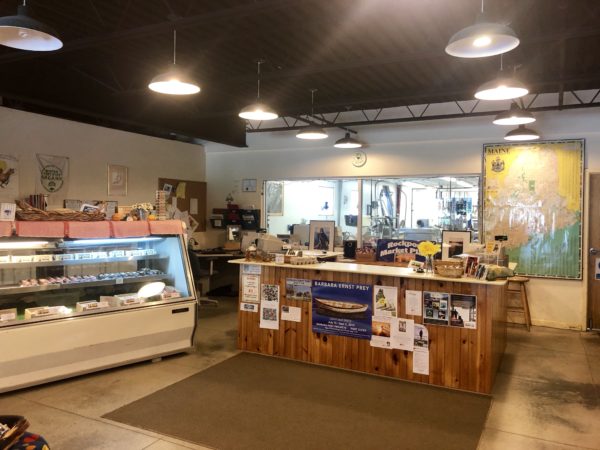 ROCKPORT, Maine — Walking into the Rockport Marketplace is like walking into Maine’s largest home pantry.

There are shelves upon shelves of jams, jellies, hot sauces, coffee, beer and wine, baking mixes, granola, potato chips, mustards and marinades. Any food item you can think of, the Marketplace most likely carries a Maine-made version.

But at the end of this month, after nearly two decades on Route 1 in Rockport, the Marketplace will close.

“Places come and go, but I love this place and I will miss all my customers,” Rockport Marketplace owner Cathe Morrill said. “It’s been a blast doing what I’ve been doing. Meeting people from all over the world who walk in the door looking for Maine products.”

When Morrill put the building on the market a year and a half ago, she envisioned that the Marketplace and the State of Maine Cheese Co., which she also owns, would remain as anchor tenants. But in February, a local businesswoman approached Morrill with an offer to buy the building to turn it into an entertainment center with escape rooms.

Within three months, the sale of the building went through and Morrill realized she had unintentionally displaced her business.

While the State of Maine Cheese Co. will live on as Morrill works with a potential buyer for the brand, the Rockport Marketplace has run its course. Not only did the marketplace offer a place for local food makers to sell their products, but it also often served as a place for small food businesses to grow.

“She really has had an impact on an awful lot of businesses in a positive way,” said Allison Lakin of Lakin’s Gorges Cheese, which at one point operated out of the Rockport Marketplace.

The Rockport Marketplace would not exist without the State of Maine Cheese Co. — one of the state’s longest operating cheesemaking businesses — which began producing cheese in 1983. Morrill and her husband, Frank, purchased the company in 1996.

In the time since they purchased the cheese company, Morrill said they have seen the number of cheesemakers in the state jump from the single digits to nearly 90.

“We wanted to showcase Maine cheese because it was still burgeoning at the time,” Morrill said. “It’s been so much fun to [see and be a part of] the growth.”

The Rockport Marketplace will close July 31.

When the couple decided to upgrade the cheesemaking facility in 2000, they built the large red building on Route 1 where the business is currently located. Morrill wanted to showcase Maine-made products in a market alongside the cheesemaking operation.

“Our goal was to not only have a better facility but to showcase Maine products,” Morril said. “There is so much affinity for things that are local.”

Since Morrill purchased the State of Maine Cheese Co., she has been heavily involved with numerous organizations across the state that work to promote Maine-made products, including the Maine Cheese Guild and the Maine Grocers and Food Producers Association.

Through recommendations from customers and her involvement with the Maine food scene, she was able to come across the wide array of products that stock the Marketplace shelves.

While the business is open year-round, Morrill said the location on Route 1 in the midcoast attracts a number of summer tourists who want to go home with a Maine-made product.

Whether a customer is from Maine or not, Morrill said she has loved introducing people to the variety of food products made in the state. Her passion for local products, and the people who make them, hasn’t gone unnoticed by those who have worked with her.

“She’s an incredible cheerleader for people’s efforts, for every single maker that she’s carrying there,” Lakin said.

Lakin began her cheesemaking business in the early 2000s, but in 2011 she needed a commercial — and expensive — milk pasteurizer to expand the types of cheeses she could make. Instead of taking a huge financial risk and purchasing her own pasteurizer early, she rented space and used a pasteurizer at the State of Maine Cheese Co. facility at the Marketplace.

While Lakin only intended to make her cheese at the Marketplace for a short time, she ended up staying there for six years before moving to her current location on her farm in Waldoboro.

Cheesemaking is one of those industries that has a very high overhead,” Lakin said. “To be able to launch my business with very low overhead was such a gift.”

Lakin’s Gorges Cheese was only one of numerous businesses that spent time at the Marketplace. Maine Street Meats, a butcher and specialty products shop, got its start in a small room located at the Marketplace before moving to a standalone location earlier this year.

Morrill said working with local producers has been the best part about operating the Marketplace.

“[Maine makers] love what they do, and they love being in Maine. Everyone I’ve come across has so much passion for what they do,” Morill said.

While the market will be closing July 31, the cheese company will still be operating in the space until the brand is sold.