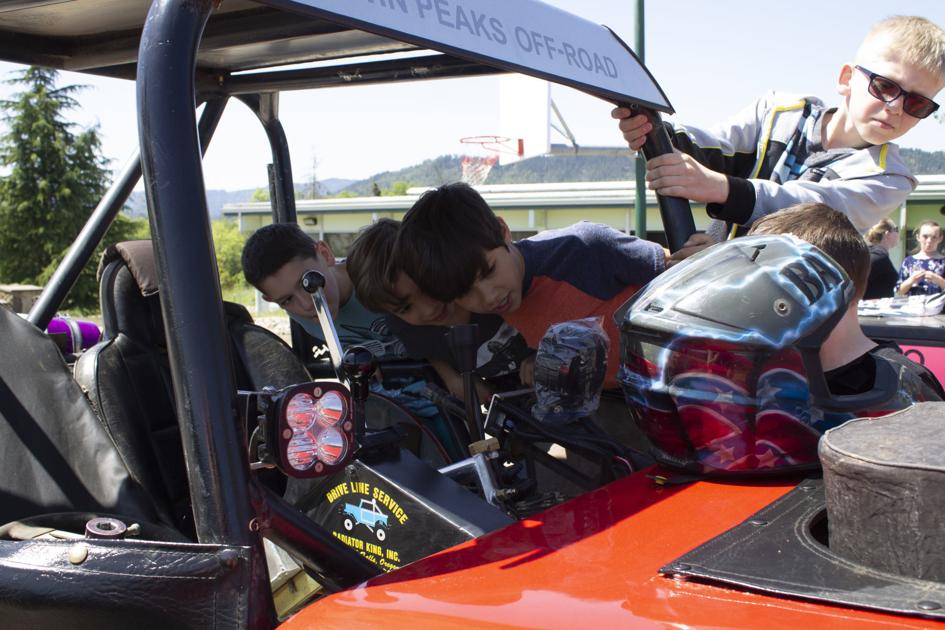 LOOKINGGLASS — Racecar drivers may be cool, but they’re not cool with bullying.

Several of the drivers talked about being bullied when they were in school and the importance to stay kind and not retaliate.

Virgle Osborne, owner of Twin Peaks Off-Road, said he was bullied in the second grade because he was mixed race.

“I didn’t like it very much,” he said. “The right thing to do is to not let it continue.”

While sometimes the temptation was there to a bully someone smaller, it’s important to stay kind and tell an adult.

“My biggest regret was not telling somebody,” hardtops racer Chuck Jacobs said. “Don’t be afraid to talk to somebody about it.”

Kindness and asking for help were overarching themes throughout their presentation.

When asked what she learned from the presentation, second grader Amiah Kooken said, “to never bully each other even though they’re being mean to you.”

After the presentation in the gymnasium, students had a chance to look at the cars the drivers brought.

“I’d want to (race cars),” Amiah said, while looking at the cars, but added, “But I can’t because I already do violin and gymnastics.”

Lookingglass students Haven and Timothy Smith also brought their carts from the races they compete in at the Douglas County Fairgrounds.

Racers Against Bullying was a program created by the PRA to promote kindness and education.

“You can do anything you want, don’t let anybody tell you you can’t,” Osborne said. “Don’t ever give up.”

To promote education PRA also started the Racers for Reading program, where children can read 10 books during the summer to get a free ticket for themselves and an adult to a racing event.