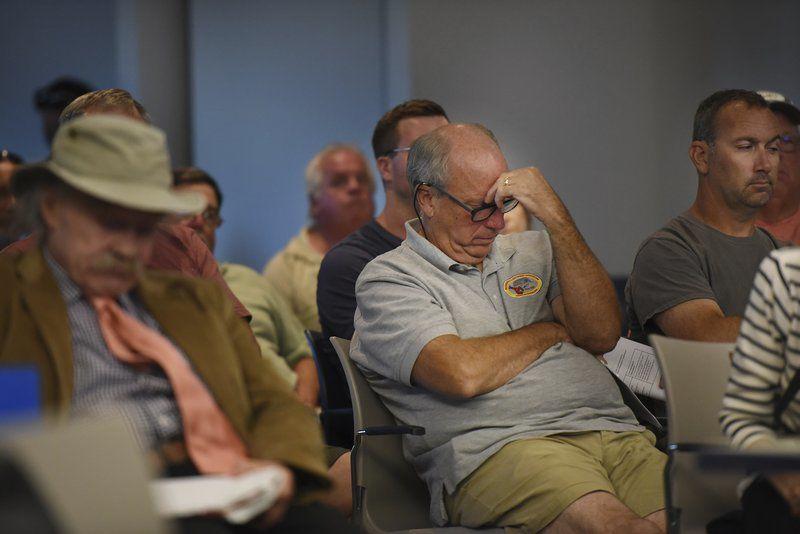 GLOUCESTER — The fitting end came, fittingly, at the end.

After more than two hours of dueling advocacy from fishermen and whale activists at a NOAA Fisheries meeting Tuesday night on proposed protections for North Atlantic right whales, the last speaker stepped to the microphone.

Marie Melvin, who earlier had taken part in a 15-person save-the-whales rally outside the Greater Atlantic Regional Fisheries Office in the Blackburn Industrial Park, still wore her allegiance on her white save-the-whales T-shirt.

But her message was not to the environmental choir. Nor was it a plea to regulators for even stricter restrictions to help reverse the fortunes of the dwindling number of right whales. Her message was to the dozens of lobstermen among the crowd of about 100 that filled the GARFO auditorium.

Melvin began by thanking the Massachusetts lobstermen for their honest effort and acceptance of current conservation measures, for changing the way they fish and for the money they’ve spent complying with the new rules.

“I’m sorry you feel like we’re blaming you,” Melvin said, emotion growing in her voice. “It’s just that we feel powerless. We just want to keep these whales alive and we feel like we can’t do it.”

Melvin’s verbal olive branch silenced the room that had on a couple of occasions erupted into a cauldron of shout-downs and insults between some fishermen and vaudevillian whale activist Richard “Max” Strahan, who spent much of the evening being baby-sat by a NOAA Law Enforcement officer because of his frequent outbursts.

Her comments also crystalized the passion and emotion that grips the issue of how to save the imperiled North Atlantic right whales — whose numbers are down to about 400 — without eviscerating the regional commercial lobster fishery.

The evening began with a presentation from NOAA Fisheries’ Mike Asaro and Colleen Coogan that offered a historical backdrop on the status of the North Atlantic right whale stock and an explanation of the specific protectionist measures adopted in April by the Atlantic Large Whale Take Reduction Team.

Those measures — which include buoy line reductions, weaker ropes and stricter gear marking — fall heavily on the lobster industry.

The plan’s emphasis is on reducing the number of vertical buoy lines in the water to achieve a 60 percent reduction in serious right whale injuries and mortalities. It does not include any new area closures.

“The biggest impediment to recovery is entanglements,” Asaro said, adding that whale researchers believe there have been almost 1,500 whale entanglements since 1980.

In Massachusetts and New Hampshire, lobstermen are tasked with reducing their vertical lines by 30 percent. In Maine, where there has been significant pushback by state officials and the nation’s most formidable lobster fleet, the target is significantly higher — 50 percent.

Then came the comment period and the usual choosing of the sides.

‘We get no credit’

The lobstermen, with a strong assist from Bob Glenn from the Massachusetts Division of Marine Fisheries, pointed out that the Bay State is far ahead of the curve on implementing measures to protect the right whales.

Those measures, which include a huge area closure around Cape Cod, gear modifications and vessel speed restrictions, “demonstrate our commitment,” Glenn said.

Glenn also cautioned federal fishery regulators that other gear-modification measures under consideration could put fishermen at risk by forcing them to fish with gear their boats are not designed to use.

“Massachusetts has done all they can do,” Ring said. “DMF should be here getting an award tonight.”

Other local lobstermen, including Arthur “Sooky” Sawyer, president of the Massachusetts Lobstermen’s Association, urged regulators to apply all new measures “fairly and equitably” across the region.

That became a recurring theme, as lobsterman after lobsterman said the real onus of new protections should be visited on Canada, where the majority of right whale mortalities have occurred by ship strikes and entanglements.

“We don’t kill a whale a year (in the U.S.),” said Rockport lobsterman Mike Polisson. “We have more whale protection measures in effect than all the other states in the country.”

“Massachusetts is in the forefront of trying to help these whales,” said Gloucester fisherman Paul Theriault. “We’re way ahead of everyone else, but we get no credit for it.”

Whale advocates offered a different perspective within a consensus that the measures adopted by the take reduction team do not go far enough.

Erica Fuller of the Conservation Law Foundation said the preferred measures should include an extension of the current Cape Cod closure to the New Hampshire border, and a new 6-month seasonal closure of the lobster management area south of Martha’s Vineyard and Nantucket. She also said lobstermen should be subjected to “100 percent reporting.”

Katharine Deuel, of the Pew Charitable Trusts, reiterated the need for new area closures and called for NOAA Fisheries to fund research into the development of ropeless traps. She also urged regulators to expedite their rule-making process to get new protections in place before more right whales perish.

The stand-your-ground moment of the night belonged to 21-year-old Maggie Rogers of Gloucester, who described herself as a “generally concerned young person.”

Rogers reminded the house that the North Atlantic right whales are moving toward extinction and that “extinction is forever.”

“We have to correct human errors and actions in a meaningful way,” she said at the microphone before endorsing several measures already offered by other whale advocates.

At one point her voice broke a bit and someone in the audience laughed derisively.

Rogers stood up for herself.

“I’m not crying,” Rogers said in a steady voice. “I’m just a little nervous up here.”