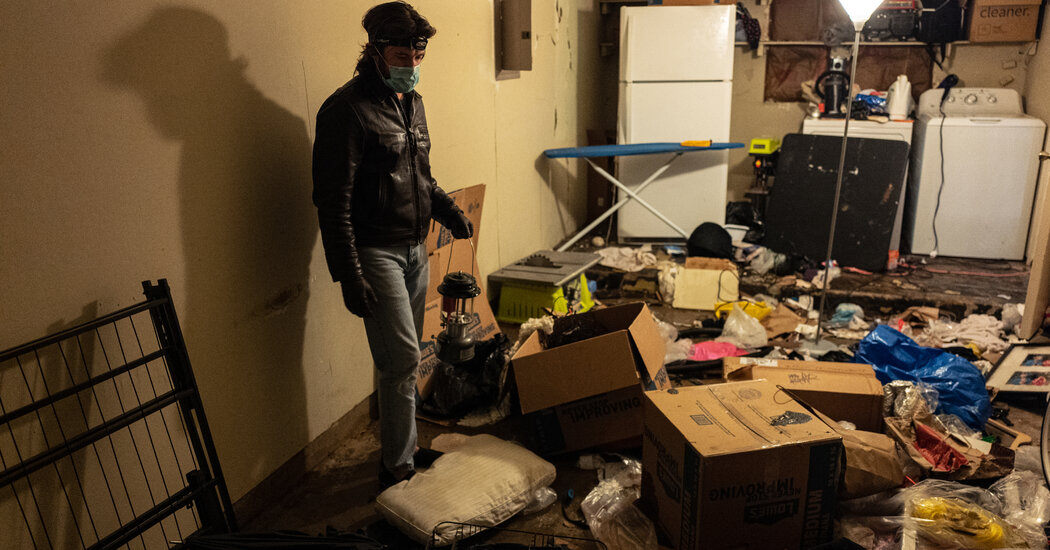 Here’s what you need to know:

The end of frigid conditions across Texas is in sight on Friday, but many residents who fled their homes this week in search of warm beds and showers of any temperature are only now discovering the extent of the winter storm’s destruction.

After spending five straight days inside the hospital where she works as a phone operator, Kendall McKee was greeted by a neighbor on Thursday when she returned to her building in West Houston.

“I knew right away something was wrong,” said Ms. McKee, 36.

Entering her apartment was a familiar experience, she said. She felt saturated carpet squish between her feet, saw puddles on the floor, wondered about the source of the water. Four years ago, her mother’s Houston apartment was flooded by Hurricane Harvey.

“I’m not losing everything, the way my mom lost a ton of stuff during Harvey,” she said. “But it’s still — I don’t know, I don’t really even know what I lost yet.”

The National Weather Service projects high temperatures in the Houston, Dallas, Austin and San Antonio areas to reach the mid-40s on Friday, before rising into the 50s on Saturday and the 60s on Sunday. Nights may still produce lows around freezing.

But as frozen pipes thaw, residents already reeling from the arctic blast may face significant property damage. Already, state officials are preparing for many requests for help. Gov. Greg Abbott of Texas said he would ease restrictions for out-of-state plumbers and those with expired licenses. Others are urging residents to do what they can to prevent leaks, including shutting off the main water line to their homes.

About 13 million Texans were being told on Thursday to boil their water for safety reasons, and cities across the state were opening water distribution sites. Along with broken pipes inside homes, water providers will have to grapple with substantial damage to the main water lines that run through neighborhoods, W. Nim Kidd, the chief of the Texas Division of Emergency Management, said at a news conference.

Ms. McKee said she would be able to stay at her mother’s house as she surveyed the damage in her apartment and tried to contact her rental insurance provider.

“I was just looking forward to sleeping on my bed again,” she said.

As power began to flicker back on across much of Texas, millions across the state confronted another dire crisis: a shortage of drinkable water as pipes cracked, wells froze and water treatment plants were knocked offline.

The problems were especially acute at hospitals. One, in Austin, was forced to move some of its most critically ill patients to another building when its faucets ran nearly dry. Another in Houston had to haul in water on trucks to flush toilets.

But for many of the state’s residents stuck at home, the emergency meant boiling the tap water that trickled through their faucets, scouring stores for bottled water or boiling icicles and dirty snow on their stoves.

For others, it meant no water at all. Denise Gonzalez, 40, had joined a crowd at a makeshift relief center in a working-class corner of West Dallas on Thursday where volunteers handed out food from the luggage compartment of a charter bus.

Back at her apartment, she said, the lights were finally back on. But her pipes were frozen solid. She could not bathe, shower or use the toilet. She said she had been calling plumbers all day, but one of the few who answered told her it would be $3,000 to come out to assess the damage.

Major disruptions to the Texas power grid left more than four million households without power this week, but by Friday morning, only about 200,000 lacked electricity. Much of the statewide concern had turned to water woes.

More than 800 public water systems serving 162 of the state’s 254 counties had been disrupted as of Thursday, affecting 13.1 million people, according to a spokeswoman for the Texas Commission on Environmental Quality.

A brutal winter storm has battered large parts of the Central and Southern United States, forcing millions of people to search for the basics for survival — food, water and shelter from record cold.

President Biden has declared emergencies in Texas, Oklahoma and Louisiana and vowed to send aid. Nonprofit organizations are also at work trying to address the humanitarian crisis created by the storm.

Here is how you can help.

The Houston Food Bank is collecting donations to help feed people. A total of 150 meals can be provided with a donation of $50, the organization says.

The Austin Disaster Relief Network is accepting donations in order to provide people with emergency housing, gift cards, and supplies for short- as well as long-term needs.

Getting food to people in need can be difficult, especially when the bitter cold strains local energy grids. Organizations that are on the ground and helping feed people include the North Texas Food Bank; the San Antonio Food Bank, which serves southwestern Texas; and Feeding Texas, which partners with nearly two dozen food banks throughout the state.

Front Steps, an Austin-based organization working to end homelessness, is running a blanket drive. Instead of “blessing bags, snack bars, etc.,” the group notes that blankets have a “lasting impact.” The group says that acrylic blankets are preferred (wool may irritate damaged skin and cotton easily retains moisture).

In Lewisville, about 25 miles north of Dallas, the Salvation Army is looking for food and supplies, including gloves, towels, soap and moisturizer.

The Homeless Alliance in Oklahoma is asking for donations so it can operate its day shelter and extend its street outreach efforts. According to the organization, it can provide a week’s worth of lunches to a person at its day shelter with a donation of $4.

The Regional Food Bank of Oklahoma has an ongoing call for financial contributions, as well as donations of nonperishables and dry goods.

The Acadiana Regional Coalition on Homelessness & Housing, which serves eight parishes in the state, is seeking donations to both its general fund and its emergency hotel shelter fund.

According to the Foodbank of Northeast Louisiana, one in five people in its area faces hunger. The organization says it can help provide 55 meals with each donation of $10.

Make sure to research any organization on trusted sites like Charity Navigator or Guidestar, which rate nonprofits based on their effectiveness and financial condition. These sites can also show whether the organization’s goals and practices align with your values and beliefs.

The Internal Revenue Service’s database can tell you if the organization is eligible to receive tax-deductible donations.

After disasters like crippling storms, there is often an increase in fraudulent activity. If you suspect an organization or person may be committing fraud, you can report it to the National Center for Disaster Fraud.

In California, wildfires and heat waves in recent years forced utilities to shut off power to millions of homes and businesses. Now, Texas is learning that deadly winter storms and intense cold can do the same.

Bill Magness, the president and chief executive of the Electric Reliability Council of Texas, the state’s grid operator, said on Thursday that Texas was “seconds and minutes” from a catastrophic blackout this week as rotating outages were used to control the flow of electricity.

The country’s two largest states have taken very different approaches to managing their energy needs — Texas deregulated aggressively, letting the free market flourish, while California embraced environmental regulations. Yet the two states are confronting the same ominous reality: They may be woefully unprepared for the increasing frequency and severity of natural disasters caused by climate change.

Blackouts in Texas and California have revealed that power plants can be strained and knocked offline by the kind of extreme cold and hot weather that climate scientists have said will become more common as greenhouse gases build up in the atmosphere.

The problems in Texas and California highlight the challenge the Biden administration will face in modernizing the electricity system to run entirely on wind turbines, solar panels, batteries and other zero-emission technologies by 2035 — a goal that President Biden set during the 2020 campaign.

The federal government and energy businesses may have to spend trillions of dollars to harden electricity grids against the threat posed by climate change and to move away from the fossil fuels responsible for the warming of the planet in the first place. These are not new ideas. Scholars have long warned that American electricity grids, which are run regionally, will come under increasing strain and needed major upgrades.

“We really need to change our paradigm, particularly utilities, because they are becoming much more vulnerable to disaster,” Najmedin Meshkati, an engineering professor at the University of Southern California, said about blackouts in Texas and California. “They need to always think about literally the worst-case scenario because the worst-case scenario is going to happen.”

Like millions of his constituents across Texas, Senator Ted Cruz had a frigid home without electricity this week amid the state’s power crisis. But unlike most, Mr. Cruz got out, fleeing Houston and hopping a Wednesday afternoon flight to Cancún with his family for a respite at a luxury resort.

Photos of Mr. Cruz and his wife, Heidi, boarding the flight ricocheted quickly across social media and left both his political allies and rivals aghast at a tropical trip as a disaster unfolded at home. The blowback only intensified after Mr. Cruz, a Republican, released a statement saying he had flown to Mexico “to be a good dad” and accompany his daughters and their friends; he noted he was flying back Thursday afternoon, though he did not disclose how long he had originally intended to stay.

Text messages sent from Ms. Cruz to friends and Houston neighbors on Wednesday revealed a hastily planned trip. Their house was “FREEZING,” as Ms. Cruz put it — and she proposed a getaway until Sunday. Ms. Cruz invited others to join them at the Ritz-Carlton in Cancún, where they had stayed “many times,” noting the room price this week ($309 per night) and its good security. The text messages were provided to The New York Times and confirmed by a second person on the thread, who declined to be identified because of the private nature of the texts.

For more than 12 hours after the airport departure photos first emerged, Mr. Cruz’s office declined to comment on his whereabouts. The Houston police confirmed that the senator’s office had sought their assistance for his airport trip on Wednesday, and eventually Mr. Cruz was spotted wheeling his suitcase in Mexico on Thursday as he returned to the state he represents in the Senate.

As the Cruzes were away, millions of Texans were still without electricity, many had no running water and the icy air that swept into the state was so severe that the Federal Emergency Management Agency had been activated to send supplies, including generators. Some searched neighborhoods for discarded fallen trees to burn for warmth.

“What’s happening in Texas is unacceptable,” Mr. Cruz told a television crew at the Cancún airport. He was wearing a Texas state flag mask and a short-sleeved polo shirt tucked into his jeans; the temperature in Cancún was above 80 degrees Fahrenheit on Thursday, and in the 30s in Houston.

After landing back in the United States, Mr. Cruz offered a new statement with a different tone from earlier in the day, when he had tried to explain the vacation without regrets and left the impression that it might have always been a one-day trip for him. Speaking to reporters after his arrival home, he conceded that the trip was “obviously a mistake” and said he had begun having “second thoughts” as soon as he boarded the plane to Mexico intent on a few days of remote work in the sun.

“The plan had been to stay through the weekend with the family,” he said, framing the decision as a parent’s attempt to placate his two daughters, ages 10 and 12, after a “tough week.”