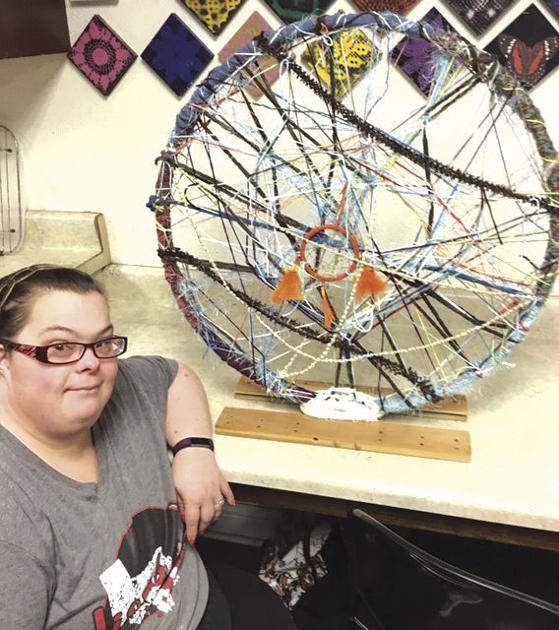 The public is invited to attend the Lakes Regional Community Center’s annual art and photography exhibition from 6-7:30 p.m. Tuesday at the Fletcher Warren Civic Center. The awards from the juried show will take place at 7 p.m.

“This year we are doing yarn art,” Lakes Regional Creative Expressions and Art Coach Shirley Harrison said recently. “We didn’t want to knit or crochet, so we started wrapping yarn and came back every day and did some more. We’ve worked on these pieces for two months. Part of our inspiration for doing textile art is the artist Judith Scott.”

Joyce Scott wrote a book about her twin sister Judith who suffered with Down Syndrome. Once Judith discovered yarn art at a program called Creative Growth for adult artists with developmental disabilities in Oakland, California, she began to weave, using various everyday objects. Judith wrapped wood and also used beads and broken furniture in her designs. Her acclaimed work has been shown at the Museum of Modern Art and in museums and galleries around the world.

The Lakes Regional fiber art creations include a large ship-like structure called “Sailed,” another named “Creature” and a big yellow “School Bus.” “Grandmas’s Fish” has blue plastic fins. “Astronaut” is a figure wrapped in white with a mask and an oxygen back pack, and “President” is decked out in formal wear with a stripe down the side of the trousers. An unnamed piece combines beautifully colored variegated yarn, and “Machine” mixes art with an industrial look. The large “Guardian Angel” consists of halos and wings, and “Tower” blends paint and yarn. The circular turquoise and orange yarn sculptor “Dream Catcher” is named “Lucky” and will later be used to display photos. “Cat Gracie” is a yarn-wrapped cat playing with a ball of yarn.

In addition to the yarn art, the Wesley Street Snappers at Lakes Regional will present their photographs for the juried show. Teresa Delcambre, the qualified intellectual disability professional at the center, sponsors the photography club.

“This is our seventh year to have an exhibit of photographs,” Delcambre said. “We definitely have a strong showing this year. There are some really neat photos.”

The winners in each category will receive the special “Dead Paintbrush Awards,” which were crafted and embellished from Lakes Regional’s cache of worn-out brushes.