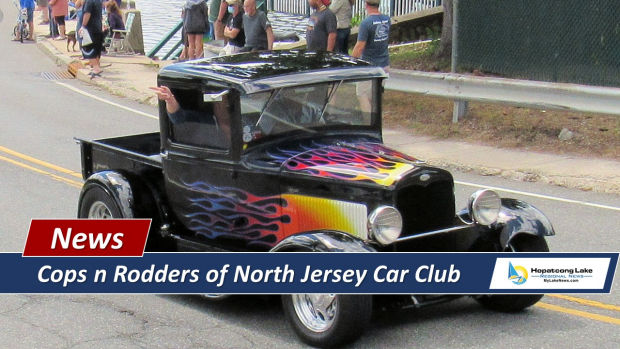 On Sunday, May 31, 2020, Cops n Rodders of North Jersey put on a spectacular show for Lake Hopatcong area with over 300 cars in the parade that stretched for over seven miles.

The parade was well received by residents from around the lake, as they lined the route showing their appreciation for what turned into the largest event on Lake Hopatcong so far this season.

The high level of community support shown to this event extended into each of the town’s Police and Fire Departments, who did everything possible to augment the event, with police blocking intersections and the Fire Departments actively participating and enhancing the parade.

According to Club President Ed Barricella, “The turnout for this event was phenomenal, I’ve never seen a turn-out like this for a car cruise event. There were 100’s of people gathered in different spots, they were waving, laughing, and smiling and just having a great time.”

When the club president was asked if this would turn into a reoccurring event, “I believe it might be possible, I was very impressed with the turnout and the local support.”

Founded in 2002 Cops and Rodders LLC is a car club based in Northern New Jersey. They host cruise nights, car shows, driving cruise events, and community events. They work closely with the “Smiles for Margaret” charity as well as various car clubs in the area. The club shows thrown to benefit charity normally attracts over 300 cars.