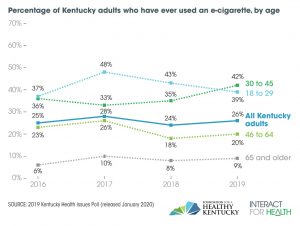 Tobacco remains the single most preventable cause of disease and death among Kentuckians.

However, the nature of tobacco use is changing, particularly with the rise of e-cigarettes. Commonly known as vapes, vape pens or hookahs, e-cigarettes use a battery and a heating element to deliver nicotine vapor to the user.

To better understand the attitudes and opinions of Kentucky adults about e-cigarettes, the 2019 Kentucky Health Issues Poll asked about taxing e-cigarettes and about experiences using such products.

The survey is conducted by the Institute for Policy Research at the University of Cincinnati on behalf of Interact for Health and the Foundation for a Healthy Kentucky.

“E-cigarettes are often a method for delivering nicotine—and many at levels far higher than traditional cigarettes,” said O’dell Moreno Owens, M.D., M.P.H., President and CEO of Interact for Health. “A growing body of research is showing that use of e-cigarettes can lead to negative impacts on lung and cardiovascular health; therefore, it’s important for tobacco control efforts to include electronic devices.”

Currently, Kentucky taxes traditional cigarettes at a rate of $1.10 per pack, compared with the national average of $1.81. The Commonwealth also taxes other tobacco products, including snuff and chewing tobacco. E-cigarettes are the only nicotine-containing product sold in Kentucky that is not subject to an excise tax.

KHIP asked Kentucky adults if they favored or opposed an excise tax on e-cigarettes, and found that 3 in 4 Kentucky adults (75 percent) favor such as tax. Support was high across all political parties.

Other data on e-cigarettes:

• 1 in 4 Kentucky adults have ever used an e-cigarette, a rate that has remained steady since 2016. Youth use is higher, at 53 percent, according to the Kentucky Youth Risk Behavior Surveillance Survey.

• About half of Kentucky adults believe that e-cigarettes are just as harmful as regular cigarettes for adults and youth.

From Foundation for a Healthy Kentucky