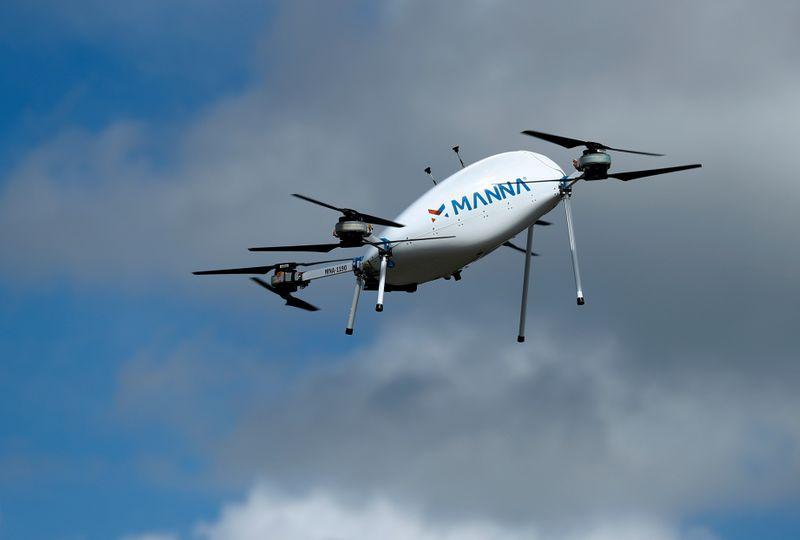 Moneygall, IRELAND (Reuters) – Ireland’s Manna Aero should have been dropping off its first takeaway orders around a Dublin university campus by drone in March but then the coronavirus pandemic shut the country and its pilot programme down.

Within a week, the drone company was testing out an entirely different concept – delivering medication and critical supplies to isolated elderly people whom the Irish government had told to stay home to avoid infection.

Manna worked with Ireland’s health service operator to try out the system in Moneygall, the small midlands town best known for its ancestral links to former U.S. President Barack Obama, who visited in 2011.

After weeks of flying to and from residents’ homes, the local pharmacy and convenience store – located at the Barack Obama Plaza motorway service station – Manna says it has proved the technology works.

“We wanted to do something small but meaningful that would be representative of what the future might look like either in an extended lockdown or a repeated lockdown in the future,” Manna Aero chief executive and founder Bobby Healy told Reuters.

“Long term, we know that the future is going to have drone delivery. This helps with hearts and minds around how important, how safe and how practical autonomous delivery is going to be while at the same time genuinely helping a small town under really difficult circumstances.”

Manna, which counts Peter Thiel’s Founders Fund, an early Facebook backer, among its investors, will continue the deliveries on a non-commercial basis and could cover around 600 towns of similar size around the country by the end of the year if the government wishes, Healy said.

With one drone capable of making 100 4-kilogramme deliveries a day, that could involve not only the 450 licensed drone pilots in Ireland but also some of the many pilots Ryanair and IAG-owned Aer Lingus have said they plan to let go as a result of the coronavirus disruption.

In Moneygall, locals are running a dedicated phone line rather than a mobile phone application so vulnerable residents like Fidelma Gleeson, 70, can order bread and milk, and have her prescription medicines brought to the door.

“Well it means an awful lot to me. I thought I’d never see the day that that would happen, that I wouldn’t have to be getting into my car and going into town to collect it,” she said.

While Manna, which partnered with food delivery giant Just Eat on the postponed university project, hopes ultimately to replace road-based delivery, the COVID-19 project is personal to Healy and Manna’s staff of 23.

“My mother is 76 years old. If she was in Moneygall, I have no doubt whatsoever that she would be constantly going up to the shop and putting her life at risk,” said Healy, a former chief technology officer at online car hire brokerage CarTrawler.

“If we’re asking elderly people to do something really difficult, we should do everything we can to make that easy for them.”

(This story corrects spelling of company name to Manna, not Mana in paragraphs 4, 11)