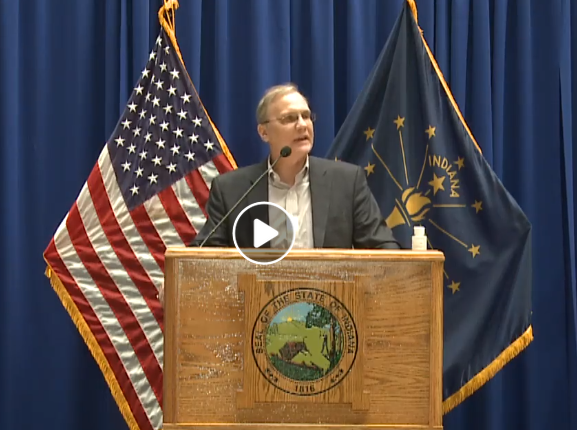 Gov. Eric Holcomb’s administration intends to maintain education funding at the level set in the 2020-21 state budget, notwithstanding the tax revenue cliff Indiana is about to fall off due to the effect of coronavirus on jobs and the economy.

Cris Johnston, director of Indiana’s Office of Management and Budget and a Crown Point native, last week said the administration wants to avoid reducing funding for schools, social services and public safety, even as sharp cuts in state spending may be needed elsewhere.

“Kindergarten through 12th grade education funding is a priority for the state of Indiana as it represents over 50% of the general fund budget,” Johnston said.

“We plan to continue the existing appropriations and funding for schools as was adopted in the budget through the rest of this biennium.”

At the same time, Johnston acknowledged the state’s ability to meet that objective “will be influenced by the availability of future revenues, uncertain economic conditions and the flexibility afforded in the recently adopted federal assistance legislation.”

“Needless to say, challenges lie ahead.”

At a news conference Thursday, Johnston declined to predict exactly how much tax revenue Indiana is likely to lose in coming months.

But Holcomb said Friday he anticipates the state will use up to $1 billion from its $2.4 billion budget reserve to carry Indiana through the June 30 end of its current budget year.

“Those reserves have begun to be utilized and will continue to play an important part as we take the necessary steps to confront this public health emergency,” Johnston said.

Both Johnston and Holcomb said spending the reserves is necessary because coronavirus is poised to whack Indiana’s revenue from several different directions at the same time.

For example, a record 62,777 Hoosiers filed for unemployment benefits last week after losing their jobs due to coronavirus social distancing measures and the governor’s stay-at-home order.

That number almost is certain to continue increasing in the weeks ahead, which will, in turn, significantly reduce the income tax revenue the state would have received if those workers still had jobs.

Likewise, Hoosiers with reduced or no incomes aren’t out shopping and generating sales tax revenue, and even Hoosiers with jobs currently have few places to spend their paychecks as most Indiana retailers are closed until at least April 7.

Also shut down for the foreseeable future are the state’s 13 casinos, including five in Northwest Indiana, meaning the full $50 million in anticipated March wagering taxes won’t be deposited in the state’s bank accounts.

In addition, Indiana has joined the federal government in shifting its 2019 income tax filing deadline to July 15 from April 15.

While that allows Hoosiers facing an cloudy economic future to have some extra cash as they find their footing, it also postpones the receipt of an estimated $600 million in revenue the state otherwise would have taken in next month to the next budget year.

“This timing difference will put a strain on our state’s resources,” Johnston said. “In this time of uncertainty, we’re going to do what we always do, and that is make the best decisions we can with the information that we have.”

In the short term, Johnston said his office already is working with state agencies to find savings and efficiencies in their current operations.

“What once was a ‘nice to have’ is being looked at as a ‘can it be stopped or delayed’ so we can deliver on the ‘must haves,'” he said.

Johnston also anticipates OMB using revenue modeling and perhaps crafting a new revenue forecast well ahead of the usual December release of estimated tax receipts for the 2022-23 state budget that will be approved next year by the General Assembly.

“We’ll see how our revenues look over the course of the next several months as we start planning that budget and working with the Legislature next year,” Johnston said.

Holcomb is hopeful that, in addition to relying on the state’s reserves, the approximately $1.2 billion Indiana is due to receive from the federal coronavirus rescue package enacted Friday by President Donald Trump will help carry Indiana’s finances through the crisis and safely to the other side.

Holcomb and Johnston agreed neither knows as this point how much of that federal money will need to be spent to protect health care workers from COVID-19 and support a staggering number of Hoosiers who have lost their jobs through no fault of their own.

But the governor said he is eternally optimistic about the future of both Indiana and its people.