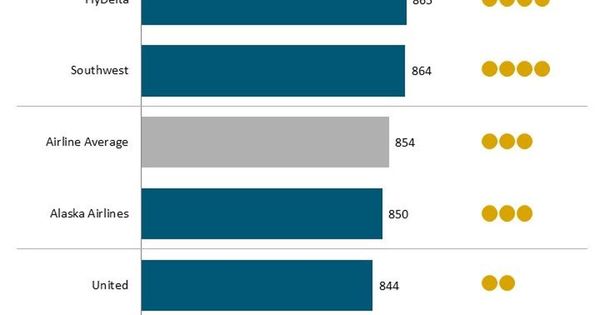 This or may not count as actual news given the low regard that many travelers have for airlines, but the big conventional U.S. airlines, the ones sometimes called “Legacy Airlines,” are trailing lots of other industries in customer satisfaction. But what is news that is that it’s not customers’ satisfaction with only the actual experience of flying that’s failing to satisfy conventional carriers’ customers.

Nope. In this case it’s the quality of customer experience that the big conventional airlines provide to customers who shop for and buy tickets using either carriers’ mobile apps or their websites.

For that matter, ALL travel industry websites – including those of online travel agencies, hotels, and rental car companies – scored much lower in customer satisfaction than the websites of companies participating in other business segments like, notably, the websites of most big credit cards and the banks that issue them. Even so-called “digital native” companies like Uber, Lyft, Airbnb and those airlines and hotel companies that were launched in the digital age, whose websites and/or apps tend to be in tune with and more pleasing to consumers than the legacy carriers’ sites, still scored much lower in customer satisfaction than the websites and apps of companies competing in entirely different business categories.

Michael Taylor, Travel Intelligence Lead at J.D. Power,  says travel apps and websites these days serve as primary channels through which consumers not only shop and buy but actually “experience” travel. J.D. Power’s initial customer satisfaction ratings of travel industry websites and apps were published last week. In other words, the process of searching for a hotel, booking a rental car and getting real-time flight status updates has become as much a part of consumers’ experience of travel as sitting in a plane seat, staying in a hotel room or driving a rental card.

But, Taylor said, “Given the crucial role they play, many travel apps and websites are still too complex for consumers to navigate and do not offer the most helpful information at the right time.

“One hotel website, for example, requires 29 separate actions across five different pages to make a reservation,” Taylor explained. “That’s not good enough when customers are experiencing simple, elegant, seamless experiences in their banking and credit card apps and websites.”

The data quoted by J.D. Power comes from two parallel studies done in August and September of this year: The 2019 U.S. Travel Website Satisfaction Study and the 2019 U.S. Travel App Satisfaction Study. Both sought to evaluate satisfaction with travel apps and websites, respectively, across four segments: airline; hotel; online travel agencies (or OTAs, such as Expedia, Orbitz, Travelocity and others); and rental car. Both studies explored the key variables that influence customer choice, satisfaction and loyalty based on five factors: clarity of information provided; ease of navigation; overall appearance, speed of screens/pages loading; and range of services/activities. The 2019 Travel App Satisfaction Study collected 12,410 evaluations from users; the 2019 Travel Website Satisfaction Study collected 13,424 user evaluations.

Some of the most notable revelations from those studies include:

Notable results from the study of customer satisfaction with travel apps include:

Notable results from the study of customer satisfaction with travel website include: