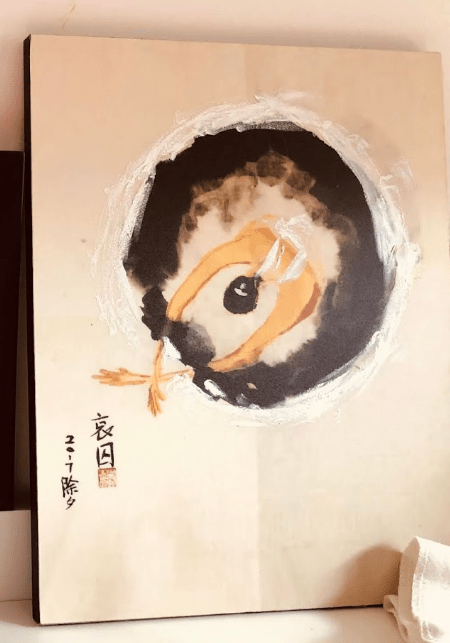 This is the tenth year since I was barred from leaving the
country. I still remember the last time I came back to Shenzhen, from Hong
Kong, on March 17, 2009. After that I have never been out of Luohu Border
Control.

The first time I was barred from leaving the country was in
2005, because I had made the documentary “Taishi Village” (《太石村》). Perhaps it was because the police putting the restrictions
on me hadn’t gotten in touch with the customs yet, or because my passport
hadn’t expired (the digitalization of personal data wasn’t as strict back
then), so between 2005 and early 2009, I left the country several times for
meetings or screening tours to universities abroad.

Over the course of the decade, I made many requests to the
police to lift the ban, but all were turned down. They had many excuses, common
ones being that the decision had been made by someone at a higher-ranking
branch (like the Ministry of Public Security, or they joke that the order was
in place for my protection. Whatever the case, no matter how I have tried to
argue or defend myself, it hasn’t changed a thing.

Once, in my despair, I told those policemen: “Maybe when the
day comes that you let me out, I won’t want to leave.” I was extremely sad when
I said those words, for if what I said came true, it would mean that I had lost
much more than my mere freedom of travel, but my longing to see the outside
world, my thirst for academic and artistic exchange, and my love of freedom. Of
course, the guobao (国保, Domestic Security
Division) officer may not have understood what I meant. But on the other hand I
also know that many have undergone suffering far worse than mine. Many have
made far greater sacrifices: Tang Jingling (唐荆陵),
Liu Xiaobo (刘晓波), Gao Zhisheng (高智晟). The price I paid is miniscule by comparison.
So I don’t let it disturb me.

Each line of the last stanza is the title of a symphony.

It’s been a very long time since I last saw Suli (素利), and I only got in touch with her on WeChat
last month. She was missing for a few years. I took wedding photos of her and
Qin Yongmin’s (秦永敏, a political prisoner
serving a 13-year sentence) and have always stayed in the loop about her
situation. After she read this poem, she left me a message saying that it
brought her to tears. This morning she sent me a recording of her reciting my
poem. I was very touched and felt a sense of solace. I just hope that we can
take care of each other by writing and reading poems.

I think, if one day I regain my freedom of travel, I will
definitely read out this poem at some gathering. This is one of the reasons why
I thought to have this translated into English.

I Travel the Earth in Sound

Gold and silver treasures hide in my heart, fine and soft
The fine is longing, the soft is affection
At border control we are stark naked
Under the gaze of ultrasound or MRI scanning

You ordered me to open up all of my luggage
You say: computer, folders and documents
I say: those are personal photos
Why would I bring the things that you are looking for?

The winter of ten years ago is already dead
The memories of ten years past — sometimes they recur in a flash
Policewomen at my sides, two cold faces as I use the toilet
Turn on hard drive. Do not close the bathroom door.
Police officers’ silence, long and inscrutable
A verdict without trial
Unwritten prohibition

Across the stretch of ten years, the Custom faded into the distance
No hate, and also no love
It is like a world that sometimes feels so far away
Nothing to do with me, like we are at opposite extremes
Don’t tell me anything about travel
A humble puppet dressed in kimono
An ugly doll from the Indian tribes
The delirious cat has grown
I took a Berlin Bear to Tiger Temple
[1]

A passport is a sleeping beauty dying to see her prince
Sometimes I feel a desire to bury her, three feet below
In a grave more dear than her abode when alive
A live burial for a nonexistent kiss
Only a name and a nation
Like the Thirteen Tombs, not knowing what they are

One day, I told the police
The truth is, I don’t want to travel anymore
Pass a life sentence on my passport
However you like: firing squad or lethal injection
For someone who doesn’t have the desire anyway
Whatever the punishment is, it won’t matter

Of course, I didn’t tell him
All the places I want to go
Just hearing a name is a night full of starlight
In Honduras, is there the raging flow of waterfalls?
Like a massive symphony every morning, what a deep romance

In Mexico, there is Frieda, her flowers of the desert
Albania, where the mountain hawk soars high and away
Fighter planes frozen in the secrecy of their cavern airbase
Slovenia, a five-word poem
How splendid, a perfect euphony
Liechtenstein and Morocco
As dashing as secret agents

With the thrill and mystery of Hollywood
The Vatican, Britain, Ireland …
I remember the rain on the street corners coming back from Scotland
I remember the wide embrace of Mike and Sue
And that Australia-accented “bloody something”
Greece, Poland, Iceland, Finland
Every name a work of art
Greece, a sweet-scented candle, or the ruins of ancient shrines?
Does Poland have orchids rocking on rippling waves?
[2]
Consoling those children floating up in the wisps of blue smoke
Austria, my sister has an apple orchard in the countryside
Kafka’s home on a silent street
Yahong sent me a postcard
Portugal, Denmark, Amsterdam
Czech, Norway, Sweden, Switzerland
The white on blue of the Alps
I remember the cellar where the rebel leader was detained
I took the photo for Heping, inside of the castle
A hero rides a mighty steed
Riding gloriously to his homeland
In the splendid summer days by the lakeside in Geneva
We hear the future instructors at Harvard sing Tsai Chin’s songs
[3]

One day I will become a sack of ash
Be careful, I might scatter it around Luohu
At every point of entry and in every escalator
Beneath the wheels of everyone’s luggage
Every strand taking me beyond the border
I will be in the air, I will be on the conveyor belts
Softly rising with the steam from your teacups
I will linger in the chimneys visited by Santa Claus
In the wings of great angels
In the cruise ships sailing the oceans wide
In the melody of the Kol Nidrei
I will wander the vast world in which your sword of power buried in the sand
Going to every city, each one raising a flag to a soul set free


[1] Ai Xiaoming received these gifts from her friends when they traveled
back from the other countries. A friend got two dolls of Berlin bear to
her at Berlin International Film Festival. “Tiger Temple” is a fellow
Chinese documentary maker, now the coordinator for the Chinese
Independent Film Forum in Xi’an. Ai gave him one of the dolls of
Berlin bear as a gift of encouragement.

[2] Poland in Chinese translation consists of the characters 波兰, “wave”
and “orchids.”

[3] Tsai Chin is a pop and folk singer from Taiwan. At the Chinese
diasporas’ new year parties in the United States, those who cannot
return to China sing this song, thinking of their hometowns.

Ai Xiaoming (艾晓明) is a retired professor at Sun Yat-sen University. She works on independent documentary films and is a feminist researcher.

Translated from Chinese by Leo T.

At China Change, a few dedicated staff bring you information about human rights, rule of law, and civil society in China. We want to help you understand aspects of China’s political landscape that are the most censored and least understood. We are a 501(c)(3) organization, and your contribution is tax-deductible. For offline donation, or donor receipt policy, check our “Become a Benefactor” page. Thank you.