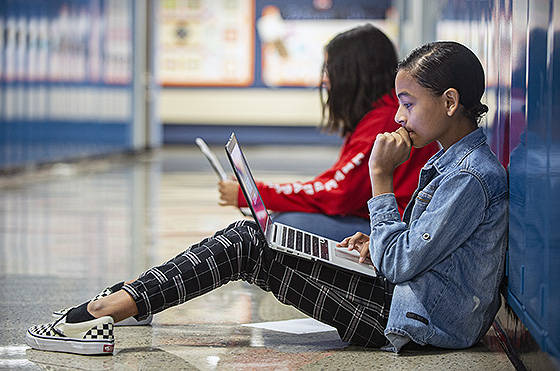 Fawlco Ramos, 13, a seventh grade student, takes a seat in the hallway and uses a laptop to do classwork. While some school districts within the same community have the newest tech, other districts are not so fortunate.

Fawlco Ramos, 13, a seventh grade student, takes a seat in the hallway and uses a laptop to do classwork. While some school districts within the same community have the newest tech, other districts are not so

Students at Harrison-Morton Middle School look forward to hearing the squeaky wheels of the technology cart approaching their classroom, though the iPads they hold may not be the latest models and time with them is limited.

A luxury in Allentown, Pennsylvania, schools, such technology has become a necessity for many suburban students — something they’re accustomed to tapping at-will and often.

Technology is one of the many things that separate students in many school districts, where wealth equates to quality.

Food is another. That’s why the staff at Donegan Elementary School on Bethlehem’s South Side sends students home with a bag of healthy snacks on weekends.

Because clothing also can divide students who have from those who have not, the Bethlehem Area School District installed a washer and dryer at Donegan, ensuring children have access to clean clothes.

Language sets students or schools apart, too. And so do ZIP codes, education reformers say, effectively segregating students by income and race.

Where you live determines what type of education you receive in parts of Pennsylvania.

Where the tax base is high, the educational offerings tend to be many. Where it is low, the options decline.

The problem is particularly severe in Pennsylvania, which Rutgers University education professor and researcher Bruce D. Baker flagged — along with Illinois — as the worst states for education inequality. In a 2014 report for the Center for American Progress, Baker found that the Allentown and Reading school districts in Pennsylvania were among the country’s most disparate.

“Quite possibly, the nation’s most fiscally disadvantaged local public school districts of significant size lie to the north and west of Philadelphia, in the districts of Reading and Allentown,” Baker wrote. “These districts sit at the bottom of the revenue distribution and serve very high need student populations.”

The gap isn’t just between districts but sometimes between schools in the same district.

Joan Preston, who has been teaching science in Allentown for more than two decades, tries to put her Harrison-Morton students on equal footing with those in the bordering Salisbury Township, East Penn, Parkland and Whitehall-Coplay districts. But she doesn’t have the resources to get them all there.

“I want to provide the same science experience that their counterparts get,” Preston said, “but it’s a challenge with our budget.”

This disparity, said Maura McInerney, an attorney with the Education Law Center in Philadelphia, comes down to one thing: the property tax structure that Pennsylvania uses to fund education.

Because the system relies more heavily on local taxes than on state and federal money, the scales tip in favor of wealthier suburban districts.

Urban districts, which are educating a disproportionate number of low-income and minority students, don’t have the tax base to provide the same quality of education, McInerney and others say.

“It’s inadequate,” McInerney said. “We have systematic racial segregation that has become more entrenched over the decades.”

The longer it takes to come up with a new funding system, the more children will be hurt by the system’s inadequacy and inequity, she added.

Neither, he said, has the ability to raise enough money from local taxes to meet student needs. The result is racial and economic segregation, Baker and McInerney said. If allowed to continue, the uphill climb will only get steeper.

No one is more familiar with that reality than Allentown Superintendent Thomas Parker, whose district is “always one emergency from disaster.”

While tax increases and belt-tightening have become routine for Lehigh Valley school districts, none has been more financially stressed than Allentown, the area’s biggest and poorest.

Desperate to fund its budget and erase a $21 million deficit this year, Allentown raised taxes by 1.75%; left vacant 28 paraprofessional, five teacher and two security officer positions; and then begged charter schools to collectively accept $6 million less — which they rejected.

But none of those drastic measures will bridge the disparity between Allentown and its neighbors. At best, they will only keep the gap from getting wider.

Education equity basically involves determining how much money districts need and where the money will come from, said Justin Silverstein, co-CEO at Augenblick Palaich and Associates, a Colorado firm that helps states design funding formulas.

“One of the key things about making two communities next to each other equitable is making sure both those communities have the capacity to raise those additional dollars,” Silverstein said.

That might require states to give more money to districts that don’t have the tax base to raise it themselves, he said.

A case set to come to trial next summer could turn the tide in Pennsylvania by forcing the Legislature to find an equitable education funding formula.

Filed in 2014 on behalf of six school districts, the lawsuit contends that the state’s way of funding K-12 education is unconstitutional because it creates “gross and irrational disparities” between districts, essentially discriminating against poorer students. While most states provided 44% of education funds on average, the lawsuit says Pennsylvania covered only 34%, leaving districts to cover more of their expenses with local tax dollars.

That’s what the lawsuit is asking Commonwealth Court to force lawmakers to do — devise a formula that gives all students access to a quality education.

Pennsylvania is not alone in seeking a remedy from the courts. William Koski, founder and director of Stanford Law School’s Youth and Education Law Project, said lawsuits over school funding have been filed in 44 states.

Despite all the cases, however, no magic formula has emerged.

“When plaintiffs win, there typically is some kind of change,” he said. “Sometimes it’s incremental and doesn’t add up to much. … Sometimes it’s monumental.”

In Washington state, for example, reform has been incremental since the state Supreme Court in 2012 sided with the plaintiff in a lawsuit alleging the state underfunded its schools. The decision forced Washington to pump billions of dollars into education. And still, most districts this school year were projecting budget shortfalls, according to The Seattle Times. School leaders blamed the shortfalls on the cost of special education or on the unintended consequences of reform, including caps on local taxes.

In Kansas, reform could be monumental. In June, an almost decade-long legal battle over how much education funding should come from the state finally ended when the Kansas Supreme Court signed off on a law that increases the state’s portion by $90 million a year.

At the opposite end of per-pupil spending is Massachusetts, which consistently turns up at or near the top in nationwide education rankings. Some districts in Massachusetts get 90% of their money from the state, while others get little and make up the difference with local taxes, said Jackie Reis, a spokeswoman for the state Education Department.

As a result, per-pupil spending in Massachusetts is the seventh highest in the country, according to U.S. census data, two notches above Pennsylvania.

“We set a floor; there’s no ceiling,” Reis said. “If the district wants to spend more, it certainly can.”

In New York City, where the population in many schools does not reflect the city’s rich diversity, high school students have held rallies and protests to address policies that put low-income and minority students at a disadvantage for getting into some of the city’s elite public schools.

And the mayor has taken up the cause, proposing changes to admissions policies that have contributed to segregation.