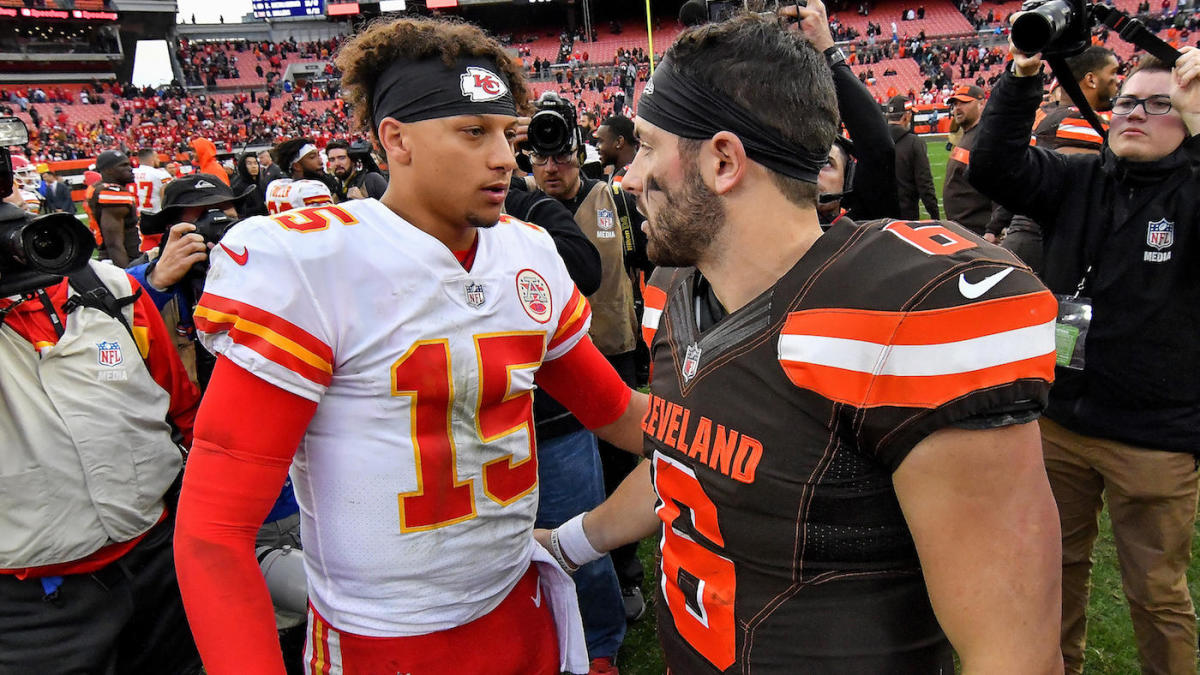 The divisional round of the playoffs is finally here. The defending champion Kansas City Chiefs welcome the Cleveland Browns (!) to Arrowhead Stadium today, as they look to defend their crown and advance to the AFC title game for the third consecutive season. After winning their first playoff game in 26 years the Browns are playing with house money, but that doesn’t mean they’re taking this one lightly.

Let’s break down the matchup.

When the Browns have the ball

Unless they get into a game like they did last week against the Steelers, the Browns are actually a pass-heavier team than you might think they are. Since Week 12 (a game that followed a three-game stretch where all of their games were played in inclement weather), the Browns have a 59 percent early-down pass rate in neutral situations, according to Sharp Football Stats. That’s ninth in the league, and quite a bit higher than the 54 percent league average during that span.

That stretch has coincided with one of the most effective stretches of play of Baker Mayfield’s career. Including last week’s game against the Steelers, Mayfield is 165 of 255 (64.7 percent) for 1,976 yards (7.75 per attempt), 14 touchdowns, and just one interception. The Browns’ heavy usage of play action and bootleg concepts play to Mayfield’s strengths, allowing him simplified reads and clearer throwing lanes when he gets onto the perimeter. He’s taken full advantage, and the Browns’ offense has accordingly experienced a good deal of success.

The Kansas City defense didn’t face all that much bootleg action this season, with teams throwing only 51 such passes, per Pro Football Focus and Tru Media. They allowed 33 completions for 281 yards, five touchdowns, one interception, and a 103.5 passer rating on those plays. Mayfield threw 68 bootleg passes (around 33 percent more than the number the Chiefs faced on defense), completing 45 for 702 yards, four scores, one pick, and a 113.7 rating that ranked sixth-best among qualified passers. He also added 57 yards on six scrambles.

We started with the passing game here because, much as the Browns might want to grind the clock and turn this game into a slugfest, it’s just not going to happen. The Chiefs offense is too explosive, and as we’ll detail below, has such a strong matchup advantage in one particular area, that they’re bound to score plenty of points. Which means the Browns are going to need to find a way to keep up. The most likely way for them to do so is by creating big plays with their play-action passing, with Mayfield hitting one of his receivers on a crosser or a deep ball on the perimeter.

Nick Chubb and Kareem Hunt will get their opportunities, to be sure. And they might even do quite well with them. The Kansas City run defense is not at all imposing, ranking 31st in the league in Football Outsiders’ DVOA and 25th in Adjusted Line Yards. But the rules of football dictate that once you possess the ball, the other team will possess it next, barring a turnover on the ensuing punt or kickoff. You can’t actually just keep the ball out of Mahomes’ hands all game. And we’ve seen teams like, say, the Dolphins, try to jump out to an early lead and hope that’s enough to carry them, but to no avail. The Chiefs can turn a double-digit deficit into a double-digit lead in a matter of moments. You know, like they did several times during last year’s Super Bowl run.

The Browns should be able to run the ball more effectively than most Chiefs opponents. First of all, they’re quite good at it, with Chubb and Hunt leading a unit that finished the season ranked seventh in rush offense DVOA. They have an excellent offensive line, assuming they can get everyone healthy by this weekend. (Joel Bitonio is still on the COVID-19 list, J.C. Tretter and Wyatt Teller have been limited in practice, and Jack Conklin has been sitting out.) Kevin Stefanski, Alex Van Pelt, and Bill Callahan do a terrific job designing their run game and layering the passing attack on top of it, which aids the success of both facets of the game plan.

But the Chiefs have been beaten exactly two times by a team that has scored less than 30 points during the last three seasons. You have to put crooked numbers up if you want to compete. And that means a lot will ride on Mayfield’s right shoulder, and his ability to distribute the ball effectively in the short and intermediate game, and to hit targeted shots down the field.

When the Chiefs have the ball

There is one player who I believe is the biggest reason the Chiefs will win this game. And it’s not Patrick Mahomes. It’s Travis Kelce. The Browns over the past few years have not valued the linebacker or safety positions all that highly, and it has left them extremely vulnerable to opposing tight ends.

The Browns ranked 28th in DVOA on throws to tight ends this season, per Football Outsiders, allowing players like Mark Andrews (5-58-2; 5-78-0), Drew Sample and C.J. Uzomah (11-87-1 combined; 5-52-0 for Sample in the rematch), Dalton Schultz (4-72-1), Dallas Goedert and Richard Rodgers (7-125-2 combined), Anthony Firkser and MyCole Pruitt (6-73-1 combined), and Chris Herndon (4-34-1) to go off for big games against them. Kelce, obviously, is considerably better than all of those players, and poses an enormous matchup problem for Cleveland’s linebackers and safeties, just like he does for players at those positions on every team in the league.

Kelce also went on a completely absurd run down the stretch of the regular season, recording at least seven catches in eight consecutive games, as well as at least 68 yards and/or a touchdown in all of them. His full-season pace in those eight games was 130-1830-12. Yeah. He’s a problem. Not that there are any answers for him that exist elsewhere in the league, but the Browns really, really don’t have them.

Denzel Ward will presumably be back on the field and that will help the Browns deal with Tyreek Hill, but A. Ward is coming off an extended COVID-19-related absence, and he’s indicated he was hit extremely hard by the virus; and B. the Chiefs vary the ways they use Hill often enough that he should end up shaking any possible shadow coverage from Ward quite a few times, and it only takes one big play for him to go off in any given game.

The way the Browns take this one from the Chiefs is by absolutely dominating the line of scrimmage on this side of the ball. It involves Myles Garrett proving himself so unstoppable that the Chiefs have no choice but to keep an extra man in for protection, removing a receiver from the route. It involves Sheldon Richardson and Larry Ogunjobi winning very quickly on the inside, forcing Mahomes into scramble mode as soon as he hits the top of his drop, and never allowing him to throw in rhythm. It involves Garrett and Adrian Clayborn holding contain and not letting Mahomes get into improvisation mode. It especially involves the linebackers and defensive backs guessing correctly, every time, on what Mahomes is going to do with the ball if and when he does break contain to the outside.

Basically it involves this Browns defense playing a perfect game. And that just seems like too tall an order.