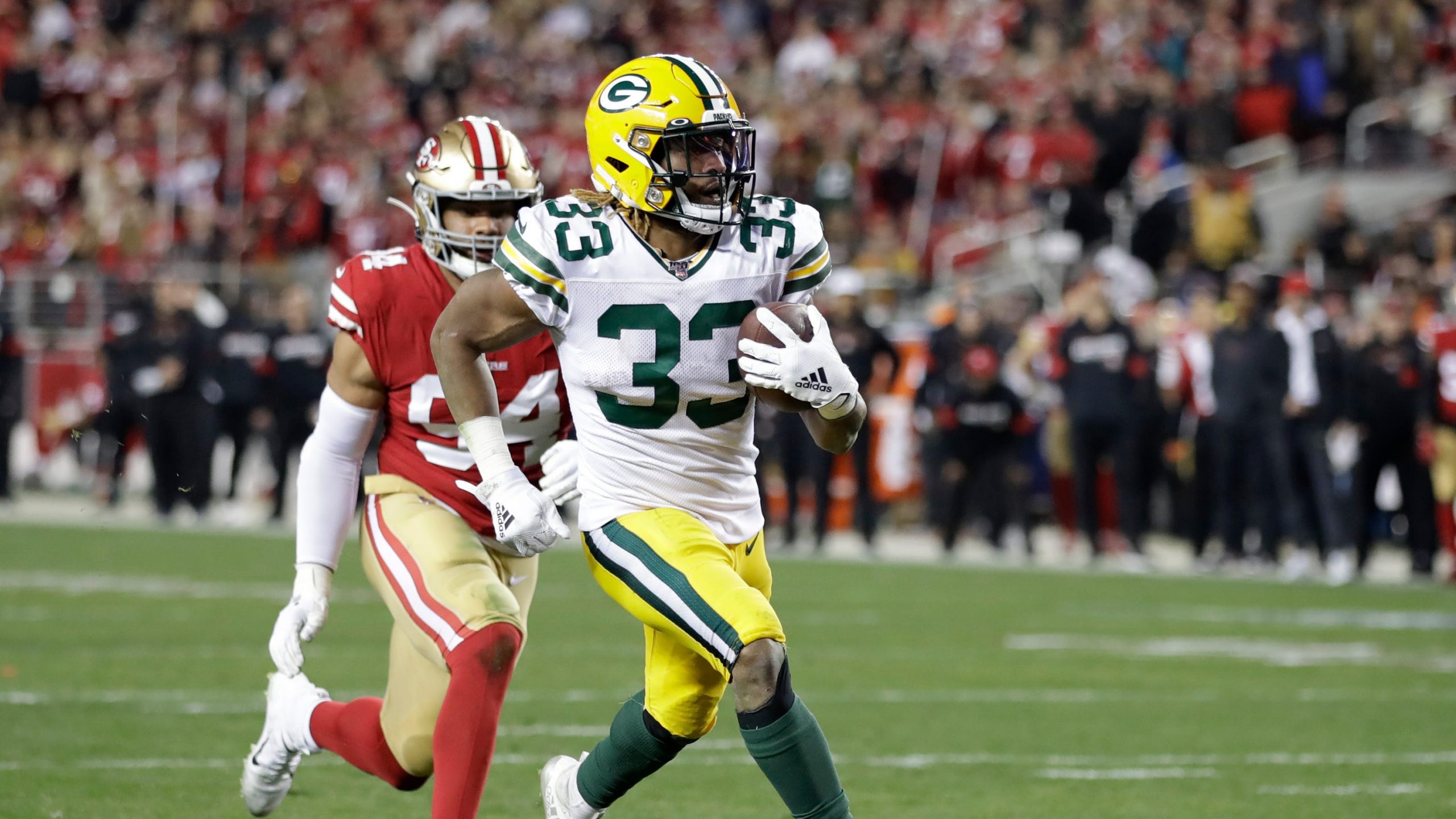 We’ll start with Pete Dougherty fielding a question Wednesday in his weekly live chat about talks between Aaron Jones and the Packers on a contract extension and whether that would be wise given the short shelf life of NFL running backs.

It’s a dicier issue with RBs, no question. They have him under their control for one more year, though they could always franchise tag him next year if they wanted. I’m thinking they should give it a shot and in fact wrote a column about that a couple weeks ago. Because of his injury history, I’m thinking they might get him at a decent price, maybe $7M a year or so. He was their key guy on offense last year, a very dynamic guy with the ball in his hands. The shelf life for RBs is short, you’re right there, so if I’m them I’d look at it as a two- to three-year deal including this upcoming season (even though on paper it could be five or six years). They still need another RB, but he’s a very good player so I think it would be worth the risk at that cost IMHO.

You can read the rest of Pete’s chat (which lasted more than 2 hours and covered a multitude of Packers topics) here:

The Packers are making their long-awaited move to clear $8 million in cap space:

For subscribers: @packers get an eyeful from Wisconsin prospects at pro day. https://t.co/ejA01Ki0Hr

In light of the decision to conduct the NCAA basketball tournament without fans, it’s uncertain whether the NFL will still hold its owners meeting in late March and conduct the April draft as a fan event in Las Vegas:

Have to think NFL owners meetings and draft will be canceled too.

The Packers acquired two sixth-round picks in trades with the Raiders (192, Trevor Davis) and Titans (208, Reggie Gilbert) and a seventh-round pick from the Ravens (242, Ty Montgomery). They also moved up from 244 to 236 in a trade that sent Justin McCray to Cleveland:

Draft order set for #Packers, who have 10 picks (including three late-round choices acquired in trades):

Green Bay is among the teams with the most picks in the April 23-25 draft:

No way are the Packers offering anything in this neighborhood to retain Bryan Bulaga:

#Cowboys’ Byron Jones’ market *starts* at $16-$17 mil per season, according to teams I’ve spoken to. And that’s without factoring in whether it’s an Oklahoma land rush for him. Conservstive market on #Packers RT Bryan Bulaga is projecting to be $12 mil per. RTs about to get paid.

If Bulaga moves on, here’s how the Packers could address the right tackle position:

Richard Ryman updates the status of the Packers Hall of Fame inductions:

For anyone wondering, the @PackersHOF induction banquet for Charles Woodson and Al Harris on April 18 is still on. Bud Selig to be honored as well. Obviously, it will remain fluid. I’ll be checking regularly. There are still some tickets remaining. #Packers

It might seem strange that a player with only 18 career games is set to become an unrestricted free agent, but that’s the winding path Redmond has traveled. https://t.co/nsjnMdrmsC

Austin Hooper, TE, Atlanta Falcons: Some of free agency’s most puzzling deals can be traced back to reliable but unremarkable players reaping the rewards of a field short on true difference makers. That could be the case with Hooper, who might be poised to reset the tight end market despite falling short of George Kittle and Travis Kelce’s class and benefitting from the attention opposing defenses gave to Julio Jones and Calvin Ridley. Hooper could still be an adequate option for a team with an established No. 1 target, but it’s hard to reconcile giving more than $10 million per year to a pass catcher who has averaged just 43.8 yards per game and 10.1 yards per catch in the last three years.

Assessing big-time #NFL free agents who might fit with your team? You might want to think twice before deciding these 10 players are a cure-all (via @MikeMSchwartz): https://t.co/oK6Au9jFWc

And finally: Ryman presents a proposal for how the Packers should manage ticket distribution if the NFL goes to a 17-game schedule:

The Packers haven’t asked my opinion. But here it is anyway. https://t.co/rb1xTSEy7X