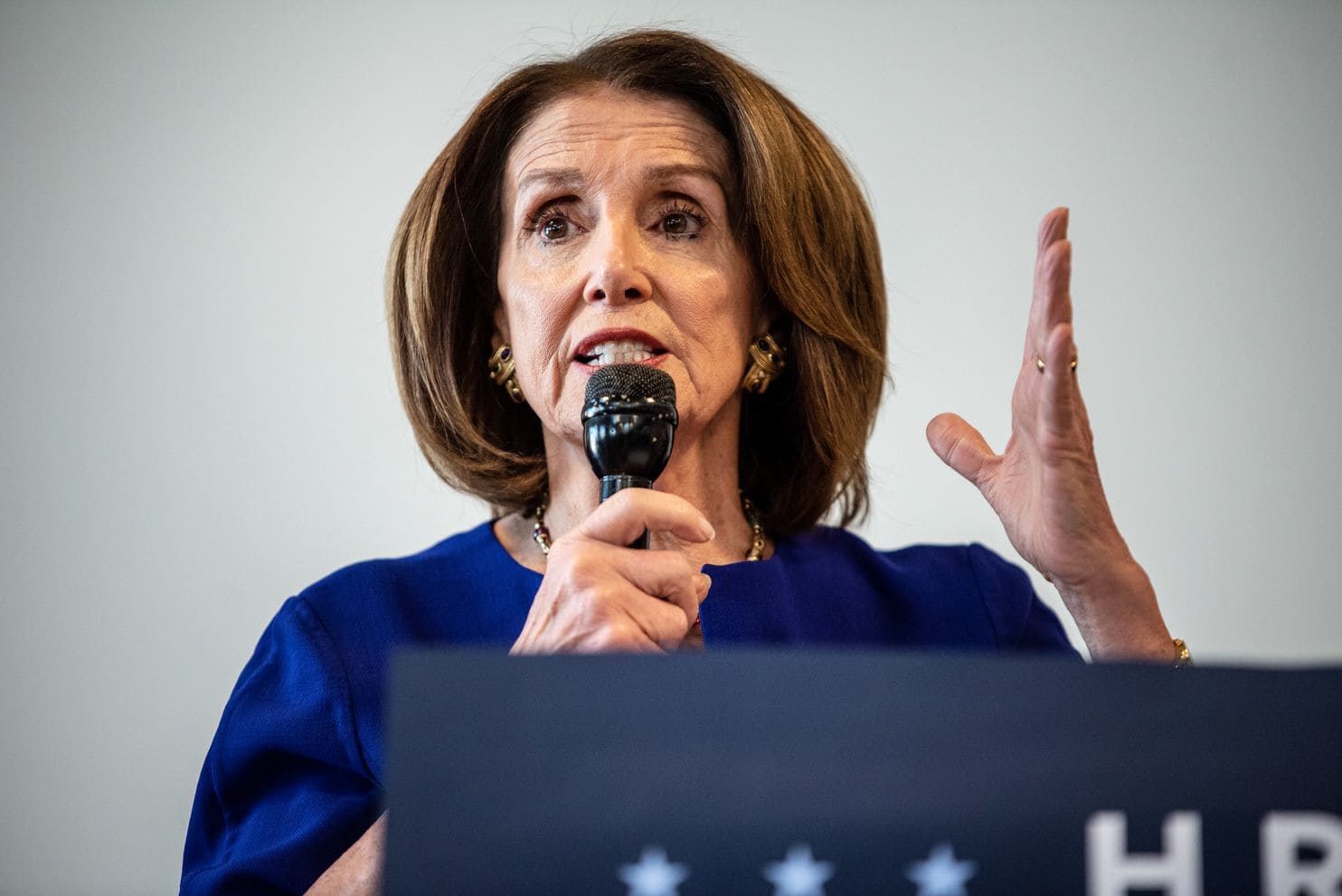 House Democrats argued acrimoniously Wednesday over whether to rebuke Rep. Ilhan Omar for alleged anti-Semitic remarks, forcing party leaders to confront a growing rift over race and religion that threatened to hamstring the newfound majority.

Omar (D-Minn.) suggested last week that Israel’s supporters have an “allegiance to a foreign country,” remarks that angered some Democrats who saw them as hateful tropes and pushed to condemn the freshman lawmaker. Her defenders argued that leadership was applying a double standard in singling out one of the two Muslim women in Congress.

In a closed-door Democratic caucus meeting Wednesday morning, lawmakers debated whether to vote on an anti-hate measure in response to Omar. The session quickly became rancorous, reflecting splinters over wider issues such as America’s long-standing support for Israel, the appropriate response to racial and religious grievances, and a new generation’s reliance on social media. Plans for a quick vote appeared to fade amid the uproar.

Democratic leaders openly fretted that the divisions would overshadow their legislative agenda, especially a planned Friday vote on a major campaign and ethics reform bill, just days after they launched a sweeping investigation focused on the president. Meanwhile, President Trump and Republicans sought to capitalize politically, eager to position their party as the more reliable ally of Israel — and the more appealing choice for Jewish voters who have long trended Democratic — ahead of the 2020 election.

Trump tweeted that it was “shameful” that Democrats weren’t taking a stronger stand against anti-Semitism in their ranks: “Anti-Semitism has fueled atrocities throughout history and it’s inconceivable they will not act to condemn it!”

But Trump’s words have been galling to Democrats, particularly members of the Congressional Black Caucus, considering the president’s equivocating after the racial attack in Charlottesville, his profane description of third-world countries and his criticism of black athletes.

“Since this president has been president, living while black has become a real, real issue, and there’s a deafening silence about how the country is changing in terms of tolerance,” said Rep. Cedric L. Richmond (D-La.), a former chairman of the caucus, in an interview moments after speaking out at the caucus meeting.

Inside the Democratic caucus meeting, according to multiple people present who spoke on the condition of anonymity, House Speaker Nancy Pelosi (D-Calif.) tried to keep the focus on a planned Friday vote on the sweeping reform bill. She acknowledged “internal issues,” according to notes taken by a Democratic aide present, and urged members not to “question the motivations of our colleagues.”

“You can disagree wholeheartedly, but do not question their patriotism or their loyalty to our country in any way, and that holds for the Republicans as well,” she said, according to the notes.

Walking into the meeting, Pelosi said the Omar situation “would be resolved” and chastised the news media.

“I think you make more of it than there is . . . to be very honest with you,” she said, adding that “the press loves to foment unease in the Democratic Party but we are very united” about the House Democratic agenda.

Pelosi made a similar point inside the room, said the aide, who spoke on the condition of anonymity to discuss private discussions.

But moments later, multiple House members stood up to challenge the decision — endorsed by Pelosi and the rest of the House Democratic leadership — to move forward with a resolution condemning religious hatred. Initially the measure targeted only anti-Semitism, with some Democrats pushing for a direct rebuke of Omar, but by Tuesday night — facing backlash from members not on board with the plan — leaders decided to expand it to include anti-Muslim bias.

On Wednesday morning, it was unclear whether there was consensus about passing any sort of legislation at all.

Rep. Bonnie Watson Coleman (D-N.J.) was among the first members to speak up in the meeting, asking, “Why are we doing this?” Afterward, she said any resolution would be “redundant and unnecessary.”

“We’ve individually and collectively already responded to the fact that we oppose all isms that do not treat people in this country fairly and justly,” she said. “To continue to engage in this discussion is simply an opportunity to give both the media and Republicans distractions from our agenda. We’ve got important work to do.”

Other members, including Richmond, said it was unfair that the caucus would take action against one of its own members while other GOP lawmakers have uttered offensive remarks with no retribution. In an extraordinary exchange this week, House Judiciary Committee Chairman Jerrold Nadler (D-N.Y.) accused Rep. Jim Jordan (R-Ohio) of anti-Semitism for a tweet referring to Tom Steyer, a Democratic donor of Jewish descent, as “Tom $teyer,” and Richmond and several other members mentioned Trump.

“We need to have equity in our outrage,” said Rep. Ayanna Pressley (D-Mass.), who after the meeting said she was focused on “the occupant of this White House who is seeding every form of hate, emboldening it with racist rhetoric and policies. That is who we all need to be focused on, and this is a distraction.”

Later Wednesday, the Congressional Black Caucus met to discuss how to handle the issue, but the group’s chair, Rep. Karen Bass (D-Calif.), said it would not take an official position on a response to Omar.

Omar attended Wednesday’s Democratic caucus meeting but did not speak. There, Pelosi made reference to an episode last week in which a sign that falsely linked Omar with the 9/11 attacks was posted at an event hosted by the West Virginia Republican Party, according to the aide’s notes: “That is outside the circle of official or civilized behavior on their part, and we cannot give them grist for it.”

But other lawmakers, including a group of Jewish members who pushed to pass the resolution focused on anti-Semitism, remain convinced that the House needs to act in response to Omar’s remarks. Twice in the previous two months, Omar has apologized for past remarks perceived as anti-Semitic, but she has publicly defended the most recent episode as a valid criticism of Israel’s influence in American politics.

Rep. Ted Deutch (D-Fla.), who is among the Jewish members involved in crafting the initial resolution, rose to defend it and, according to one member present who spoke on the condition of anonymity, grew emotional. He said his colleagues needed to understand that these words were hurtful to people like himself who had dealt with them all their lives.

One freshman member, Rep. Jahana Hayes (D-Conn.), confronted Pelosi about being blindsided earlier this week with news reports that there would be a vote on an anti-Semitism measure. The Washington Post and other outlets circulated details from a draft resolution Monday, a day before most lawmakers arrived in Washington for votes.

“We’re a large caucus. We have lots of people from lots of perspectives. At what point can people weigh in before a resolution goes forward?” Hayes said in an interview Wednesday. “I have a large Muslim population, I have moderate Jews, I have conservative Jews in my district, and people are asking, ‘What does it say?’ . . . I’m their representative, and I don’t have an answer. As a member of Congress, that cannot be how we operate.”

Hanging over the internal debate among Democrats is political pressure from Republicans. GOP leaders on Wednesday accused Democrats of tolerating anti-Semitism by refusing to remove Omar from the House Foreign Affairs Committee, which has jurisdiction over the U.S.-Israel relationship.

“They should stop empowering her disgusting hatred before it turns into horror,” said Rep. Liz Cheney (Wyo.), the House Republican Conference chairwoman.

House Minority Leader Kevin McCarthy (Calif.) and other Republicans pointed out how the GOP took action against Rep. Steve King (R-Iowa), stripping him of committee assignments after he questioned whether the term “white supremacy” was offensive. But Democrats have found the comparison laughable, pointing to the years of prior GOP inaction as King made repeated offensive comments about immigrants and racial minorities.

Senate Majority Leader Mitch McConnell (R-Ky.) addressed the issue on the Senate floor: “It is unconscionable for any member of the United States Congress, even less a member of the House Foreign Affairs Committee, to repeatedly traffic in base stereotypes.”

For Democrats, the internal divide over how to handle Omar’s statements has been exacerbated by members targeting each other on Twitter, where much of the public debate has played out — both among Democrats and between members of the two parties.

At one point during the meeting, Rep. Jan Schakowsky (D-Ill.), a close Pelosi ally, pleaded with Democrats: “Everyone stop tweeting!”

“We are now in the majority, and Republicans have an intent to divide us whenever they can,” she said, adding that her colleagues needed to find “a process where these things can play out in private and not in front of everybody.”

On Tuesday, Rep. Alexandria Ocasio-Cortez (D-N.Y.) knocked Rep. Juan Vargas (D-Calif.) on Twitter for saying that questioning the U.S.-Israel relationship should be out of bounds.

Vargas on Wednesday brushed off the online clash: “She could have come down the hall and asked me what my opinion is. That would have been fine,” he said, adding: “We have a very different opinion here, I believe. To question someone’s loyalty because they’re Jewish, I think, is terrible. It’s something that we shouldn’t question at all.”