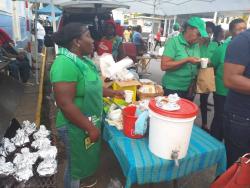 Several East Portland homeowners are basking in the windfall from the increasing demand for accommodation as the campaign for the seat vacated by murdered Member of Parliament Dr Lynvale Bloomfield heats up.

Political activists from both major political parties – the Jamaica Labour Party (JLP) and the People’s National Party (PNP) – have been descending on the constituency in droves to drum up support for their candidates ahead of the March 25 by-election. The JLP will nominate Ann-Marie Vaz, while the PNP is banking its hopes to retain the seat on Damion Crawford.

The political activists have also been forking out huge amounts of cash for accommodation in several homes and guest house for stays that could last up to a month.

Already, there is talk of a shortage of housing accommodation to adequately meet the demand from political activists. So far, private dwellings at Anchovy Gardens, Drapers, Fairy Hill, Boston, Norwich, Bryan’s Bay, and Boundbrook have reportedly been booked out by politicians.

“Yes, it is the best business I have had all year,” Keith Phillips of Anchovy Gardens in the parish told The Gleaner.

“I rented a four-bedroom house to persons who are clearly involved in politics. And I still have persons calling me to find accommodation for them. From where I am sitting, it is quite clear that anyone with even a one-bedroom unit will be able to make good on cash as accommodation is in demand.”

The influx started almost immediately following Bloomfield’s burial last weekend, and with eyes firmly set on the Vaz-Crawford matchup, the race is on to secure additional housing accommodation for party workers, who will be canvassing throughout the constituency.

But while East Portland is experiencing an influx of political people, one hotelier, Hugh Perry, who manages the Jamaica Palace Hotel, told The Gleaner yesterday that most hotels were pre-booked by an overseas movie company that is now in Port Antonio filming.

“While I can understand that private homeowners are enjoying good business, some hotels in east Portland are occupied by overseas film-makers,” said Perry.