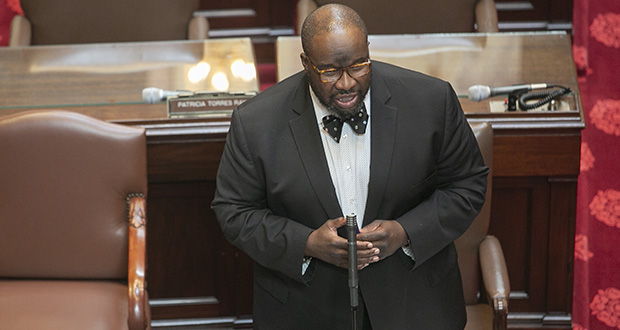 Sen. Jeff Hayden, DFL-Minneapolis, the outgoing District 62 state senator, won’t be away from the Capitol for long.

“I’ll help with strategic advice in conversations with clients,” Hayden said. “We’ll use those relationships I’ve developed at the Capitol to hopefully get some good things done for Minnesota.”

Hayden said he thinks the law firm was attracted in part to his Senate leadership experience. He leaves the Senate in January as assistant minority leader to Sen. Susan Kent, DFL-Woodbury, and also worked closely with former Democratic Minority Leader Tom Bakk, I-Cook.

“That and education are two-thirds of the budget,” Hayden said. “There are going to be a lot of people and clients who need some help figuring out how to manage through what looks to be a very turbulent time in the state’s budget.”

Beyond the Capitol, Hayden said he expects to play a role helping the firm, and the region’s corporate community in general, to achieve greater diversity and inclusion.

“What I hope to bring that would be good for the firm and good for Minnesota is, like, how do we attract and retain? How do we close gaps?” Hayden said. “How do we get black and brown people over the hump? That’s been part of my background.”

Civic engagement, pro bono work, philanthropy and internal training are all areas where he hopes he can contribute while working with the firm, he said.

“Those are all the things that they traditionally do and they want to be really effective at,” Hayden said. “They have a real commitment to being really good corporate citizens.”

While Hayden isn’t a lawyer and doesn’t plan to become one, he hopes his influence can help firms and C-suites throughout the region to attract more minority recruits.

“You don’t see many people of color, much less black people,” he said. “We should be able to name more than just the half-dozen or 10 people that you know in a region like this.”

The firm has not yet formally announced Hayden’s hiring, but he announced it on his personal Twitter account on Nov. 17.