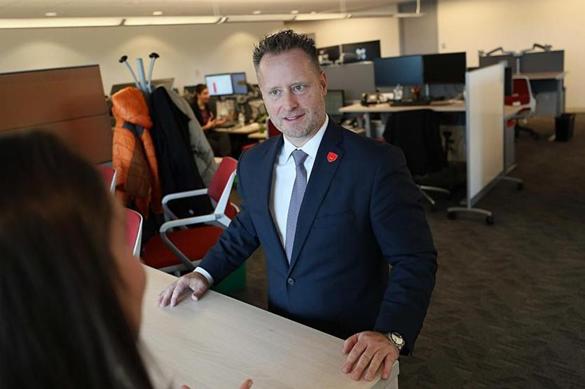 WELLESLEY — Michael A. Carson’s trajectory to the Massachusetts health care scene has been far from typical.

The German-born former soccer player and US Air Force veteran did a stint at the big beer maker Anheuser-Busch before getting into health care. He had never worked in Massachusetts before he was recruited to a senior position at the nonprofit insurance company Harvard Pilgrim Health Care, in 2017.

Board members thought he would make a good CEO someday — but that day came much sooner than they expected. Last June,
Harvard Pilgrim’s longtime chief executive, Eric H. Schultz, left abruptly after an incident of unspecified bad behavior, and Carson was asked to run the company.

Now the affable outsider who relishes strategy and numbers is putting his stamp on one of Massachusetts’ most established health care brands. He has been working to stabilize the company’s shaky finances and increase its appeal to consumers at a time of increasing competition in the industry.

Get Today’s Headlines in your inbox:

“As health care evolves, Harvard Pilgrim has to evolve,” he said in an interview at the insurer’s headquarters.

Carson, 50, joined Harvard Pilgrim two years ago as the chief business growth officer, essentially Schultz’s number two, before his promotion to CEO. He inherited an insurer reeling from years of financial losses and membership declines — and the awkward exit of its longtime leader.

That financial turnaround comes as the company appears, at least for the foreseeable future, determined to go it alone. Discussions about a possible acquisition by the hospital network Partners HealthCare have been shelved.

Harvard Pilgrim — once run by Governor Charlie Baker — is the second-largest health insurer in the state by total membership, after Blue Cross Blue Shield of Massachusetts. It also competes with Tufts Health Plan and several other local and national insurers, such as UnitedHealthcare and Aetna.

As CEO and in his previous role at Harvard Pilgrim, Carson has taken steps to tighten the company’s finances. Harvard Pilgrim cut or changed about 50 jobs over the past two years from its workforce of more than 1,800.

Carson and his team also increased prices for health plans they sell to individuals and small businesses, including coverage that is offered on the Massachusetts Health Connector.

Those premium increases and other changes cost the company tends of thousands of members — but they were necessary, Carson said.

“It’s really about making smart decisions on pricing and which products, which segments, which markets we perform in,” Carson said. “Sometimes that means you walk away from some business.”

Carson, who spent many years working at for-profit companies, is also pushing what he calls a culture of accountability; this means requiring senior executives to be on top of the numbers every day.

The insurer also has ended or renegotiated several vendor contracts, including with the company that manages prescription drug benefits for Harvard Pilgrim members. And it consolidated operations in Central Massachusetts by closing its Worcester office.

Harvard Pilgrim’s business is almost entirely in commercial insurance, which most people get through an employer. This is typically considered a profitable area. But much of the growth in health coverage now is in Medicaid, the public program for low-income individuals, and Medicare, the program for seniors.

“They’re kind of a one-trick pony. All their eggs are in the commercial basket,” said Jon Kingsdale, a former insurance executive and former state health official who now teaches at Boston University School of Public Health.

Harvard Pilgrim needs to articulate a vision to distinguish itself in a tough market, Kingsdale said.

Harvard Pilgrim has nearly 1.2 million members, but just about 15,000 are on Medicare Advantage — private plans that provide Medicare benefits for seniors. Carson wants to at least double the number of Medicare Advantage members over the next three years.

The CEO — who frequently tosses around words like aggregation and disintermediation — also stressed the importance of helping consumers navigate the complex health care system. His team has started tracking how likely customers are to recommend Harvard Pilgrim, and why.

Before arriving in Massachusetts, Carson was chief operating officer at ConcertoHealth, a private equity-backed medical group in Orange County, Calif. He also held several roles at the big national insurer Anthem. His work has taken him to New York, Florida, Colorado, Illinois, and other states.

He grew up in the suburbs of Frankfurt, raised by his mother who worked long days in a gas meter factory.

“Massachusetts is a rather conventional place,” said Joyce A. Murphy, chairwoman of Harvard Pilgrim’s board. “But it’s also good to get a fresh perspective, and someone who’s seen things and done things in other areas.”

Murphy said Carson is doing what he was hired to do: strengthen Harvard Pilgrim’s business. While Schultz excelled at the outward-facing aspects of the CEO job, such as public speaking and advocacy, Carson is more focused on the particulars of running the company, Murphy noted.

“Michael really rolls up his sleeves. He’s worked in the trenches. He really knows the details of the business really well,” she said.

Carson was named president of Harvard Pilgrim the day of Schultz’s departure. A few months later, he also received the title of CEO.

Neither Harvard Pilgrim officials nor Schultz have explained exactly why Schultz left, except to say that he broke the company’s code of conduct and didn’t live up to his own values. Schultz ran the company from 2010 to 2018, following Baker, who led a turnaround of the insurer when it was at the brink of collapse.

Carson seemed to distance himself from his predecessor, declining even to speak about Schultz’s performance as CEO.

“Not for me to judge,” he said. “From the Harvard Pilgrim perspective, there were important things I needed to focus on when I came here. We’ve been successful with that. There’s a lot more work to do for us.”