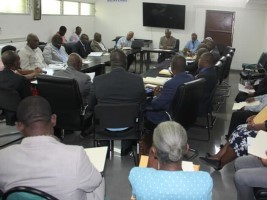 On the initiative of Pierre Josué Agénor Cadet, the Minister of National Education and his Director General, Méniol Jeune, an important working meeting was held this week at the premises of the Inspectorate General with the Technical and Departmental Directors of education, the human resource managers in the Departmental Education Departments (DDEs), the cluster coordinators, inspectors general, members of the Minister’s Office, senior staff of the Directorate General, the Special Program of free education (PROGRATE) and of Universal, Free and Compulsory Schooling Program (PSUGO).

The main purpose of this meeting was to review the process of issuing and managing contracts and to take stock of state examinations in order to speed up the preparation of official exams for the academic year of the University of the year 2018-2019.

Chaired by Méniol Jeune, assisted by the Chief of Staff, Jackson Pléteau and Joseph Nicolas, Director General of the Fonds National de l’Éducation (FNE), this session shed a lot of light on the various problems that affect the good management of the staff contract file. Remediation proposals have been formulated for the resumption of this sensitive issue in particular in the management of staff emanating from the PSUGO and the Nationalization Program of Community Schools (PRONEC).

Joseph Nicolas and his team provided details on the main factors that cause delays in the preparation of contracts and the payment of those concerned and which call the DDE. Recalling that “every penny spent on taxes levied on citizens in Haiti or in the diaspora must be used wisely to improve access and learning conditions in the classroom”

Very firm in their interventions, Méniol Jeune and Jackson Pléteau asked the departmental directors to assume their responsibilities by helping the central office in this task, in particular by blocking and sanctioning the maneuvers of those who seek to circumvent the principles relating to the nomination of these agents. To this end, the DDEs were asked to properly identify the public schools funded under the PSUGO while recording the number of classrooms and the number of teachers working under contract.

They were instructed not to be influenced by people who would, after each appointment, fill the positions of contracted released, since the funds are also no longer available to welcome newcomers …

With regard to the State exams, each DDE presented the progress of the preparations related to the organization of the examinations : 9th Year Fundamental (9 AF), Baccalaureate, Normal School of Teachers (ENI) family education (CEF). Although some DDEs are more advanced than others, all have reaffirmed their commitment to complete as soon as possible the preparatory operations for the holding of these various official tests. A deadline expiring at the end of April and beginning of May has been granted to the DDEs to finalize all the operations related to the files of the candidates which must be transmitted to the National Office of the State Examinations (BUNEXE) for the useful suites.

Following the meeting, Méniol Jeune and Jackson Pléteau underlined the Ministry’s determination to find the answers to the problems that affect the system and that require the collaboration of all, in particular the DDEs who must respect the instructions of the central authorities and engage in a new dynamic of results-based management.