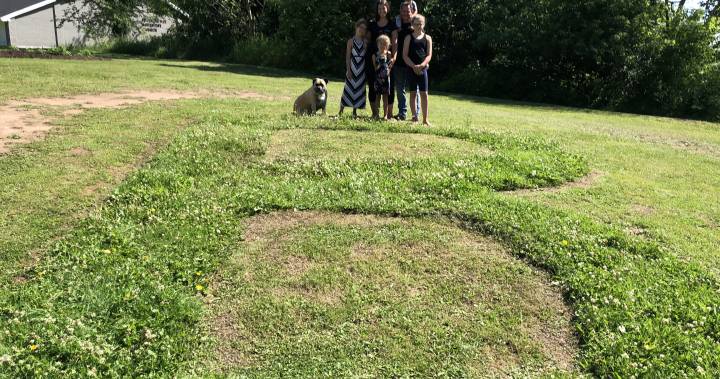 A family in Moncton, N.B, are trying to help boost the bee population and to inspire others to do the same.

“We know they are becoming endangered so we thought we would try and help,” said Richie Nauss who has purposely left a patch of the grass and clover in his yard uncut in the shape of a big letter B.

According to a study by York University, the American bumblebee is facing imminent extinction from Canada, which is considered the highest and most at-risk classification before extinction, due in part to a loss of habitat.

Many bumblebee species are rapidly declining across North America, but they are important pollinators needed to grow Canada’s crops, including apples, tomatoes, blueberries and legumes, as well as countless types of trees, shrubs and wildflowers.

Nauss said he and his family want to to encourage others to swarm in and follow their lead, and help provide food for bees.

“I think it just sends a message to respect the environment and to understand that the things we are doing now can affect the future now for not only them but for their children as well,” said Jenny Nauss, who wants to send a message to her own kids as well.

“Because of the flowers blooming in the B, and I think when people drive by and if they do end up seeing it I think it will help the bees as well,” said her 11 year old daughter, Hannah Bannister.

Chief Apiary Inspector for the province, Fetcher Colpitts, is an expert in honey bees. He said a European species of honey bee was brought into New Brunswick long ago to help pollinate the province’s vast farmland because there are simply not enough native pollinators to do the job.

“We are bringing in over 20 thousand colonies from other provinces,” said Colpitts.

“It could mean simply as no mowing your dandelions when the bees are all over your dandelions,” he said. “So just have awareness and respect for what bees are.” It’s a message the Nauss family is literally trying to spell out for their kids and their future, said Richie.

“It would be neat if if became viral and everybody made a b in their backyard and maybe it would help out a lot.”