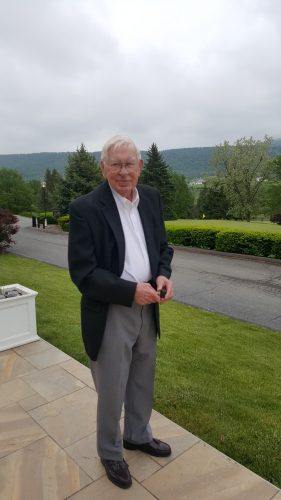 Felker graduated in 1947 from Lewistown High School. He then served in the United States Navy for three years. He met the love of his life, Connie in 1952, and they were married in 1954. Shortly after, he began working at the Belleville Flour Mill and retired in 1990.

He was a member of the West Kishacoquillas Presbyterian Church, a member of McVeytown Lodge No. 376, F&AM, Jaffa Shrine Temple of Altoona, VFW Post No. 5935, Belleville, Green Lee Camp, Lewistown Country Club, and the Rolling Rock Club. He enjoyed playing golf and played up until 2013 when he was 85 years old. He was a true Penn State fan and attended most games until 2013. University Dance Club was an activity he enjoyed as dancing was something he loved to do. Some of his favorite times were spent in Florida and traveling around the U.S.

He will be deeply missed by his family. His sense of humor was known by anyone who knew him and he was a wonderful husband, father, grandfather and friend.

His services will be private and at the convenience of the family. Burial will take place at Machpelah Cemetery, Belleville. There will be a memorial service planned for a later date.

Arrangements are under the care of Henderson Funeral Home, Belleville. Online condolences may be offered at www.hendersonfuneralhomes.net.