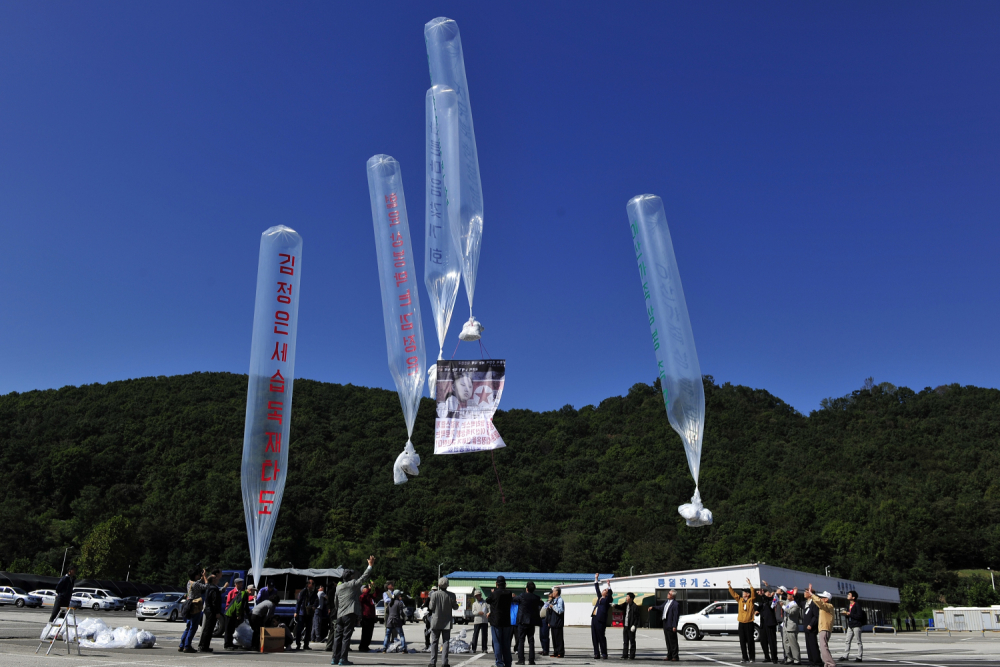 The first weeks of December were eventful in South Korean politics. After months of partisan jawing and committee deadlock, the ruling Democratic Party flexed its 174-seat majority in the National Assembly to pass a truly massive slate of laws—more than 130 bills that touched on areas including government organization, corporate governance, labor rights, and climate change. But in Washington, only one bill among the 130-plus received any attention: the revision to the Development of Inter-Korean Relations Act, the so-called anti-leaflet law that prohibits disseminating leaflets near the Demilitarized Zone (DMZ) by launching large helium balloons in a manner that could cause “serious danger.”

Rep. Michael McCaul, the top Republican on the House Foreign Affairs Committee, issued a statement criticizing the bill. A Washington Post op-ed reported that Deputy Secretary of State Stephen Biegun conveyed concerns about the legislation in his recent visit to Seoul. Amid the small club of Korea watchers in the United States, the bill was the only topic in South Korean politics that generated any significant discussion.

The singular focus on the leaflet law is a typical example of the old mindset—one I’ve criticized before—that assesses South Korea solely on the basis on how closely its North Korea policy aligns with U.S. needs. These blinkered views, disconnected from ground-level events, cause an unnecessary strain on an alliance that is far more important than just for dealing with North Korea.

Few dispute that China is this century’s greatest U.S. foreign-policy challenge. This naturally means that the U.S. ally nearest to China must be given a very high priority. If we really are in a second Cold War, South Korea is as important as West Germany was: a wealthy democracy with a twin in the communist camp, standing at the front line of the liberal world order. South Korea isn’t an auxiliary player but rather deserves to be evaluated on its own terms—something that’s unfortunately rare in Washington foreign-policy circles. Even among experts and think tanks that specialize in East Asia and the Koreas, there is little attempt to keep tabs on South Korea’s domestic politics. Instead, its politics (and sometimes its entire democracy) is judged based on two questions only: What is South Korea’s plan for North Korea, and how closely does that plan align with the U.S. plan for North Korea?

Such myopia is especially harmful today, when South Korean politics is going through a fundamental realignment similar to the ones overseen by Franklin D. Roosevelt and Ronald Reagan in the United States. For 29 years after the end of military dictatorship in 1987, South Korea was largely a conservative country, with 19 years of conservative presidencies and 10 years of liberal ones. When liberal presidents like Kim Dae-jung and Roh Moo-hyun did win, they did so by making strategic alliances with smaller conservative factions. Kim Dae-jung partnered with Kim Jong-pil, a former lieutenant of the dictator Park Chung-hee, while Roh campaigned with Chung Mong-joon, a centrist scion of the Hyundai Group. Even when they won the presidency, the liberals persistently faced a legislative minority, constricting their ability to implement a large-scale, center-left political agenda.

That era ended with the impeachment and removal of Park Geun-hye in 2017. The twilight years of Park’s presidency saw the changing of the guards, as the liberals scored four national victories in a row: the 2016 legislative elections, 2017 presidential election, 2018 local elections, and the legislative elections once again in April of this year, in which the Democratic Party earned a historic, filibuster-proof majority that it applied with gusto to pass a massive slate of progressive laws. With these victories, the electoral mainstream of South Korean politics shifted decisively. Voters in their 40s, who make up nearly 20 percent of the whole voting population, support the liberal parties by a 2-to-1 margin, making South Korea’s baseline electorate center-left rather than center-right. Conservatives may yet recapture the presidency, but in all likelihood, they will only be able to do so in the same way that liberals did 20 years ago—by co-opting center-left issues and forming an alliance with some of the progressive factions.

This sea change, however, has been mostly lost on Washington’s Korea watchers. In December, they were content to focus on one law with no attention paid to the other 130-plus that, according to the conservative Dong-A Ilbo, “effectively changed the foundation of our [South Korea’s] society.” The Corruption Investigation Office for High-Ranking Officials Act, for example, is the culmination of the Moon Jae-in administration’s prosecution reform, whose drama involving the Justice Ministry and the Supreme Prosecutor’s Office gripped South Korea for months. Revisions to the Fair Trade Act are virtually certain to trigger billions of dollars’ worth of restructuring in South Korea’s largest corporations as they come under greater scrutiny for anti-competitive behavior. The “three ILO acts” represent the greatest expansion of labor union rights in decades, making South Korea catch up to the recommendations of the International Labour Organization, the United Nations agency that sets global labor standards. In fact, the leaflet law is not even the most important North Korea-related bill that passed; that would be the corresponding revisions to the National Intelligence Service Act and the Police Act, which shifted the authority to investigate espionage cases from the spy agency to the police. None of these laws drew any attention in Washington; there was no congressional statement, no op-ed, no policy paper on any of them.

This is a pity, not least because studying South Korean politics would have made the debate on the leaflet ban more rigorous and informed. Most of the criticisms against the law come from the hard-liners in Washington who characterize the leaflet ban as a weak-kneed “capitulation” to North Korea by the liberal Moon. But if they had been following South Korean politics, they would have known that this issue long pre-dated Moon. South Korea’s restriction on launching balloons containing leaflets near the DMZ began in 2007, with even conservative Presidents Lee Myung-bak and Park Geun-hye enforcing the restriction. They did so because the safety concern was real: The last time North Korean shells landed in South Korean territory was 2014, when the North Korean military shot anti-aircraft guns at large helium balloons launched by activists.

The activists challenged the restriction with the court and lost, as the Supreme Court of Korea held in 2016 that the danger justified the restriction. The new law is no more than a legislative ratification of the Supreme Court’s decision four years ago, made more urgent today due to the risk of an inadvertent escalation into a nuclear war with North Korea. None of the criticism from the United States refers to any of this history, makes any analysis of the 2016 Supreme Court opinion, or engages with the text of the law that makes clear the ban is not a wholesale prohibition—as Article 24 of the law states, the leaflet distribution is prohibited only to the extent that it is done in a manner that causes actual harm or danger.

Being blind to these overall political dynamics harms the U.S.-South Korea alliance. Freedom of speech for North Korea activists is an important issue, but it is not the only important issue in the alliance that serves as the lynchpin for the liberal order in the Indo-Pacific. When the U.S. government expresses concern for freedom of speech only when North Korea is involved and not when, for example, the Park Geun-hye administration blacklisted and censored some 9,000 liberal-leaning artists, including the Academy Award-winning director Bong Joon-ho, South Koreans justifiably wonder if the United States’ supposed love for free speech is no more than a pretext to defend a hawkish stance against Pyongyang.

When the South Korean public sees U.S. experts on the Korean Peninsula—who are supposed to be well versed on these issues—cavalierly dismiss the concerns of more than 1.1 million residents living near the DMZ, they feel viewed as disposable chess pieces in the game of foreign policy, not as human beings who carry on their lives in a community. The leaflet ban may deserve debate, but it should be a better, more rigorous one, with an eye on the health of the overall alliance.