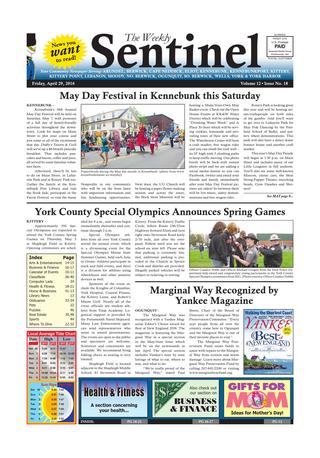 KITTERY, Maine As the National Association of Letter Carriers Stamp Out Hunger Food Drive marks its 27th year Saturday, May 11, it’s coincidentally Footprints Food Pantry’s 27th birthday. As a result, it is only fitting that the thousands of pounds of food collected that day around Maine’s southernmost community will benefit the organization that serves hungry area residents.

Footprints volunteers will drive the postal routes assisting the local mail carriers in collecting food through Kittery, Kittery Point and Eliot. Groups of drivers meet at the Kittery and Eliot post offices to get their route maps prior to driving the routes. Over the course of the day, volunteers will be at the pantry weighing, date checking and sorting the food collected as it comes in.

Residents can leave non-perishables and canned goods in their mailboxes to do some good. Footprints depends on the food drive as one of its major collections of the year, said Director Karen Brown.

Brown said last year 9,917 pounds of food were collected throughout Kittery, Kittery Point and Eliot. While typically 25 Footprints volunteers lend a hand during the day with processing, “we also have people just show up to volunteer, which is fun for everyone,” she said. “We also provide food for the volunteers and the letter carriers as well.”

In 2010, nationally, the food drive surpassed the 1 billion pound mark in total food collected over its history. Input from food banks and pantries suggested late spring would be the best time to run the drive, since by then, most food banks start running out of donations received during the Thanksgiving and Christmas holidays.

Footprints, on Old Post Road in Kittery, is a nonprofit organization run by volunteers, serving people in Eliot, Kittery and Kittery Point who do not have sufficient financial resources to meet their basic needs. The pantry provides a free four-day supply of groceries and personal care items once every seven days for income qualified residents.

Those interested in donating can also drop their goods off at the Kittery or Eliot post offices. For more information, visit www.stampouthungerfooddrive.us.