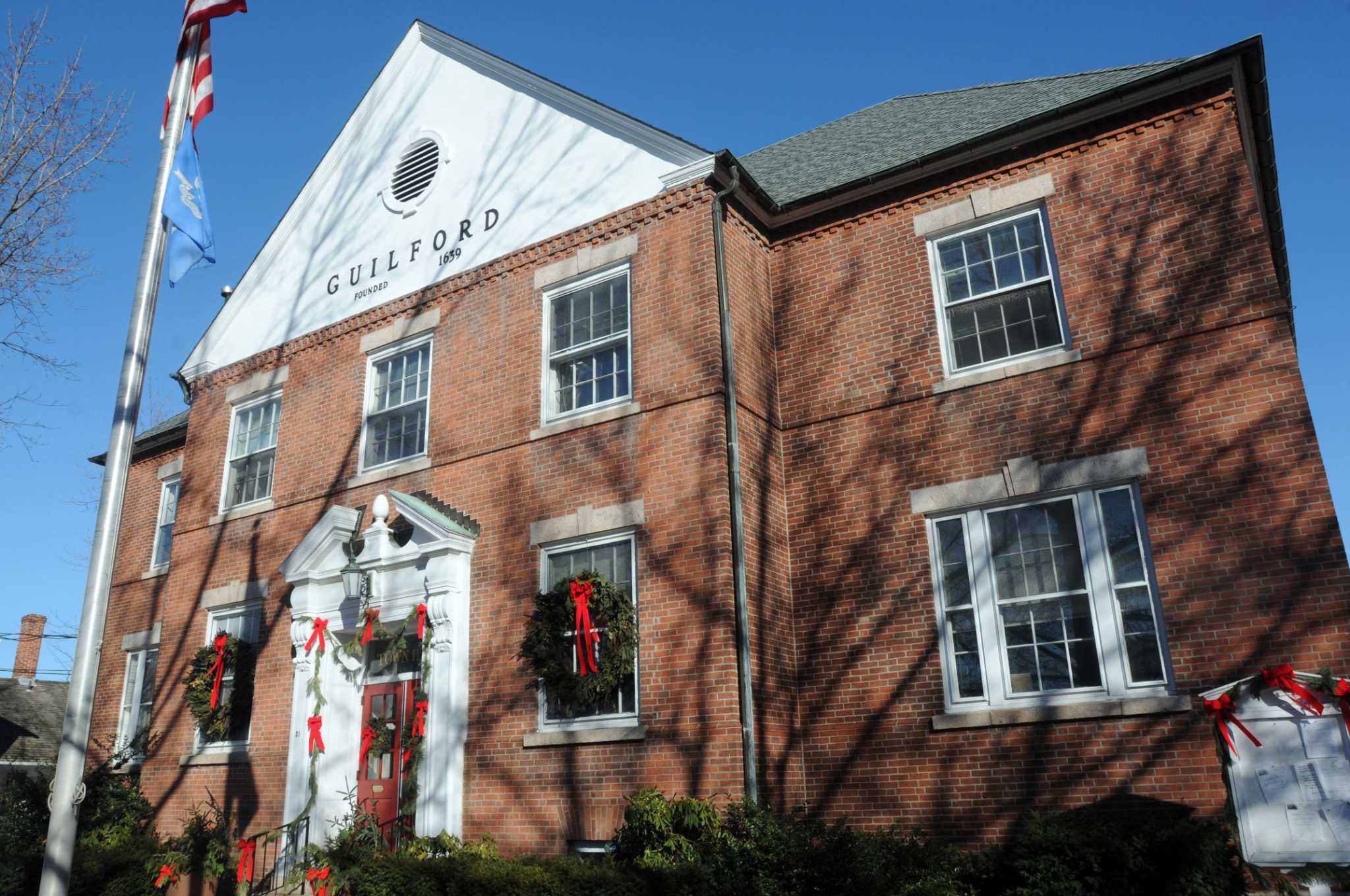 >> Six of the more than 100 Guilford establishments licensed for food service showed violations that were subject to re-inspection or follow-up in the past six months, according to Health Director Dennis Johnson.

>> Six of the more than 100 Guilford establishments licensed for food service showed violations that were subject to re-inspection or follow-up in the past six months, according to Health Director Dennis

Six of the more than 100 Guilford establishments licensed for food service showed violations that were subject to re-inspection or follow-up in the past six months, according to Health Director Dennis Johnson.

In most cases, the establishment fixed the violation within two weeks.

The total number of food service establishments in town include fast food and sit-down restaurants, delis, schools, grocery stores and convenience stores. Recommended inspection frequency varies from one to three times a year, depending on the type of establishment, health officials said.

Johnson estimated that the department conducted about 105 food service inspections in the last six months.

Upon inspection, restaurants receive a score out of 100 points. Each issue listed in the inspection report is assigned a specific point value.

To pass, the restaurant must meet two main requirements: It must score 80 points or higher, and it must not have any 4-point infractions, which pose the highest threat to food safety.

Johnson, who has directed the Guilford Health Department for 19 years, said the most common 4-point infractions occur when food is stored at improper temperatures, or when an establishment has a “cross connection.”

A cross connection involves where the restaurants keep its hoses. If, for example, a restaurant puts a hose in a wastewater sink, it risks contaminating public water supply through a reverse flow, Johnson said. Such a flow could occur if the town fire hydrants were used, in which case wastewater from the sink could flow back up the hose.

When a restaurant fails to meet requirements, an inspector sits down with the owner and explains what is needed to comply, Johnson said. The restaurant then has two weeks to fix the problems before re-inspection.

Generally, Guilford food establishments are careful about food safety, Johnson said, and if they do have a 4-point violation, they work quickly to fix it. Throughout his two-decade stint in Guilford, Johnson can only think of one restaurant that did not comply in a timely manner. That restaurant eventually closed, he said.

Below are the restaurants that needed either re-inspection or another form of follow-up during the past six months, with details about what happened.

The Shoreline Diner worked quickly to fix two 4-point violations within the past six months, according to both Johnson and Nico Anthis, the chef and owner of the restaurant.

One of the infractions had to do with the temperature at which food was stored. Anthis said that the problem started with a broken refrigerator, which forced the restaurant to relocate some of its food items.

The restaurant called someone to fix the problem, but the inspector showed up before the repairman had finished, Anthis said.

The refrigerator was fixed by the end of the day, Anthis said. He added that the restaurant has an advanced temperature-monitoring system that helps him monitor any issues with food storage.

Johnson gave a similar account: Last October, he said, an inspector found tuna salad kept at 51 degrees, which is outside the appropriate temperature range. When the inspector returned the next day, the problem had been fixed.

Though the inspection report noted the issue, it also mentioned Shorline Diner’s use of “new innovative food handling techniques.” Johnson said Anthis tends to be “ahead of the curve” when it comes to food safety.

The report also marked Shoreline Diner for a 4-point infraction where a hand washing sink in the basement was blocked by a rag bucket. By the next day, the report stated, the problem was fixed.

A report from late last August cited the Brownstone House Family Restaurant for a cross connection, where a rinse hose was not placed high enough above a dishwasher sink. To prevent the risk of reverse flow, the hose needed to be at least one inch above the sink.

According to a second inspection report dated the following day, Brownstone House had fixed the issue, bringing its score up to a 95.

Greg Klonaras, co-owner of the restaurant, said he never has major problems, and that when an inspector asks him to fix something, he promptly does so.

Reports from last August said Ballou’s had an inaccessible hand washing sink in one of their kitchens but that the issue was fixed the next day, bringing the inspection score to 94.

Another, minor infraction listed on the report had to do with the provision of a bucket that holds a sanitization mixture. Staff use these buckets to clean surface-wiping rags.

The report noted that Ballou’s needed to provide such a bucket, though Johnson later recalled it was only missing from one of the establishment’s kitchens.

Ballou’s fixed the issue during inspection, providing a bucket, according to the report.

“We take it serious. I don’t play with that stuff,” said owner Steve Kaye when asked about safety requirements and inspections.

Upon re-inspection, Ballou’s received a high score in the mid-90s.

Som Siam also had a 4-point violation due to problems with a hand washing sink. The report stated that restaurant staff should not wash hands in the food prep sink and asked that the hand washing sink remain accessible at all times.

Another issue the report listed involved the solution in the dishwasher, which apparently lacked chlorine.

The second report showed that both problems were fixed by the next day. The restaurant could not be reached for comment.

During an October inspection, KC’s Pub did not initially receive a passing score. Several weeks later, inspector Lee Archer went to the restaurant, had a discussion with owner Kelly Carney, and checked on a few issues but did not conduct a full re-inspection. Archer said he was satisfied; he considered the main infractions corrected and brought the score up to a passing grade of 83.

Carney said she felt the new score would have been higher had a full re-inspection occurred.

“There are by no means any worries at all,” Archer said with regards to KC’s. He visits the pub himself in his free time.

The restaurant faced a deduction for hand washing practices because an employee did not wash their hands before putting on gloves, Archer said, and by touching the gloves risked contaminating them.

Carney said her manager corrected the employee. She added that Archer expected employees to wash their hands between every product they handled, regardless of whether it had the potential for cross-contamination.

(Hand washing violations, Johnson said, are likely more common among food establishments than people think. He added that whenever he eats at a restaurant and sees food mishandled, he points it out to the employee.)

The other 4-point violations regarded temperature range. In one case, a delivery of ground beef measured 51 degrees, or 10 degrees above the maximum appropriate temperature.

Because of the measurement, Archer gave KC’s a 4-point deduction under the food sourcing category. He later said that since it was more than likely that KC’s returned the shipment after the inspection, an argument in favor of eliminating the original deduction could be made.

Carney said they sent the beef back when they saw it was out of range, so it never made it to the table. In these cases, her policy is always to return food, she added.

Archer also wrote in his report that some beef patties were stored at 43 degrees, also outside the appropriate range, and that a walk-in refrigerator was set at 45 degrees. For those reasons, KC’s received a 4-point deduction for food storage.

Part of the confusion, however, could have to do with changing codes, said Johnson. Technically, the health code only requires cold storage at a temperature of 45 degrees or lower.

However, the state plans to switch to FDA codes, where the cold storage temperature must not exceed 41 degrees, Johnson said.

Inspectors are being asked to enforce the lower range so restaurants can get used to the new regulation, Johnson said. The policy causes some confusion, he added.

Carney said she did not dispute the deduction but confirmed that the new rules led to misunderstandings on her end. She added that she has worked to comply with those.

After the inspection, Carney reached out to the Health Department to discuss the issues, she said. Johnson confirmed this, noting that Carney always seeks to understand where things went wrong. “She’s a team player when it comes to food safety,” Johnson said.

In an email to Archer, Carney apologized for some minor infractions, including a dirty can opener and an improperly-stored mop. She added in the email that a restaurant consultant was set to re-train the staff regarding safety guidelines.

Another minor infraction that the report mentioned was the presence of flies. Carney said that because the restaurant has a patio, flies can become an issue when the door to the outside opens and closes constantly, but that since the inspection she has added two special lights that attract insects and keep them away from the restaurant. She said she had already had two other lights before installing the new ones.

An inspection report from December showed that the Maritime Grille did not have any 4-point infractions; the establishment also received a high score. However, inspectors did need to follow up with the restaurant owner because he did not have a properly-certified Qualified Food Operator employed.

Certain types of restaurants must have a QFO on the premises at all times, Johnson said. The QFO is specially trained to oversee food handling and ensure that the safest methods are used.

If a restaurant does not have a QFO, it has 30 days to either hire one or have someone already working at the restaurant receive certification.

When asked, restaurant owner Peter Melanidis said he had someone on the premises at the time of inspection but that the person’s certificate had expired. Johnson recalled that this employee in fact had a certification, but that it was lower-level than the QFO certification.

Melanidis sent in proof of a QFO certified employee within the necessary time frame. He later said that though that employee no longer works for him, he also is now QFO certified, as is a second restaurant staff-member.

Though Melanidis was asked Friday to provide proof of the certificate via email, he had not sent them to the Register as of Monday morning.

Maritime Grille was also cited for a lack of sanitizing rinse in the dishwasher. The problem was resolved by the following day, Johnson said.