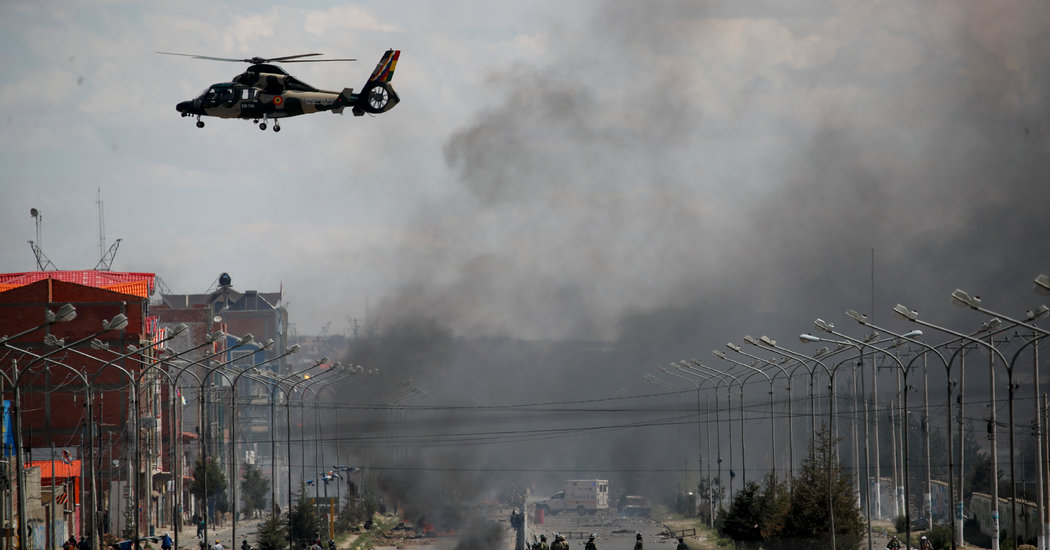 EL ALTO, Bolivia — At least five people were killed in clashes outside a major fuel depot in Bolivia that had been blockaded for days by supporters of the ousted president, Evo Morales, as the political violence that has rocked the country for weeks inched closer to its seat of power.

A New York Times reporter saw the bodies of five young men with gunshot wounds in a church in El Alto, a working-class city outside La Paz, the country’s de facto capital.

Witnesses said the men died when a military unit guarding the Senkata gasoline plant opened fire on protesters who had surrounded it for over a week.

The Senkata plant has become a battleground in the struggle between Bolivia’s interim government and supporters of Mr. Morales, who was ousted on Nov. 10.

By blocking tankers from leaving the plant, Mr. Morales’s supporters were able to cut off La Paz’s main source of gasoline and food, causing acute shortages in the administrative capital.

Bolivia’s armed forces said in a statement on Tuesday that violence had flared outside Senkata after the military temporarily broke the protesters’ siege in an effort to lead a convoy of gasoline trucks from the plant to La Paz. Protesters responded by storming the plant and breaching its walls with dynamite, before being repelled by soldiers.

Family members of at least two of the dead men said they were merely walking to work when they were shot by the soldiers.

Hundreds of residents gathered to pay their respects to the victims, whose bloodied bodies lay on pews in San Francisco de Asis Church, covered with Bolivian flags and topped with the large-caliber bullets that killed them.

“This is their decree, right here,” Jessica Quispe said between sobs while touching the body of her brother Ronald. “He was just going to work.”

A few hundred feet away, dozens of heavily armed soldiers and armored vehicles guarded the perimeter of the fuel plant, as military helicopters circled overhead.

The deaths sparked unrest in large parts of El Alto, a traditional stronghold of Mr. Morales on a frigid plateau above La Paz. Protesters on Tuesday sealed off roads with barbed wire and burned debris. They also pulled down pedestrian overpasses onto the highway to block tanker trucks from reaching the plant.

Fuel shortages have crippled the administrative capital in the valley below. Hundreds of La Paz’s public minibus drivers blocked off main access points to the city to demand gasoline.

As the crisis deepened, representatives of Mr. Morales and the interim government met Tuesday for the latest talks aimed at holding new elections.