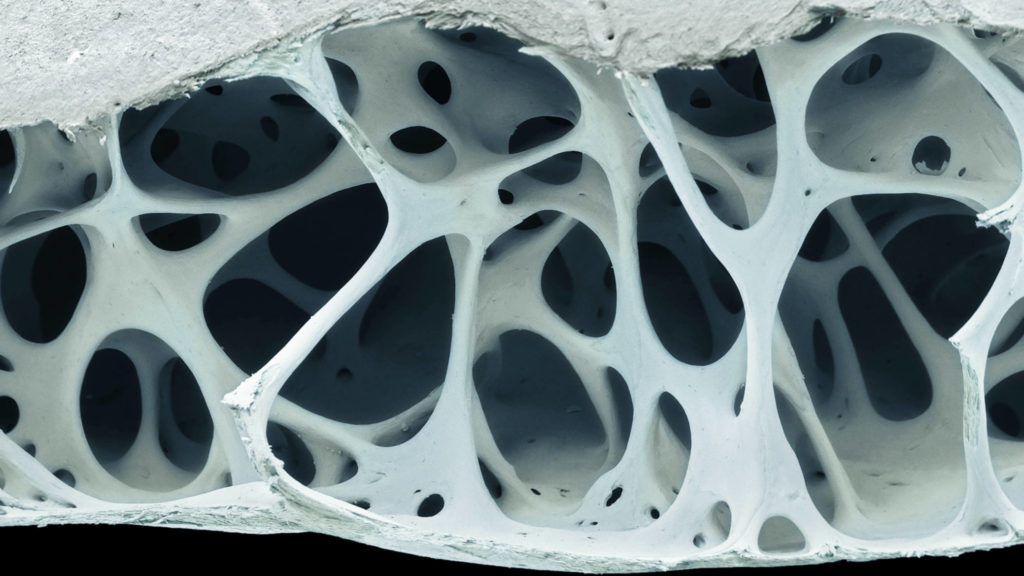 A woman is flying down a ski slope when suddenly she hits a hidden mogul and takes a bad fall, hitting her head. Later, surgeons will drill into her skull to relieve some of the pressure on her brain creating what’s known as a ‘burr hole’.

Normally, bone can heal across a fracture, but burr holes are not the same and the options for filling the hole are limited — the woman will either need an implant or bone graft from another part of her body, or have a permanent hole in her skull.

Singapore-based Osteopore listed in Australia late last year with a technology that was already making money and began development in 1996.

The tech is a 3D bio-printer which makes a scaffold that mimics bone, with a patented micro-architecture which traps the patient’s own stem cells.

It uses a slow degrading bioresorbable polymer that has been approved by the US FDA, which possesses mechanical strength similar to the more malleable ‘spongy’ part of bone.

“We started in 1996 with an aim to build a bone structure without a mould. Many medical devices are restricted by cost because often they must be customised,” Professor Teoh told Stockhead.

“Customisation was the underlying impetus — we studied eight types of rapid prototyping methodology and chose microextrusion — but we knew in the 1990s that stem cell technology for regenerative uses was coming, and we wanted to harness that.”

Microextrusion is the most common bioprinting method, as the 3D printers can print high viscosity bio-inks and can print very high cell densities for tissue formation. Osteopore utilizes this 3D printing technology to create unique microstructures that mimic cancellous bone, to initiate healing and regeneration.

It can even regrow large sections of the major bones such as the tibia in the lower leg, as proved by Brisbane surgeons last year who used the Osteopore scaffold to regrow a 36cm piece of a 29-year-old man’s tibia, which had been destroyed by a bone infection in 2017.

Video footage which demonstrates how Osteoplug repairs Burr Holes – the small holes drilled in the skull by neurosurgeons.

How bones can be regrown

There are four stages to bone regrowth generally, be it following a break or the repair of a diseased bone.

Firstly, blood vessels around the site haemorrhage and clot, sealing the broken ends of the bone.

Then within days regrowth begins as repair tissues of calcium origin start to precipitate and to remodel the bone.

Stage three is when these calcium base tissues begin to join into a plate-like network and convert to what is called spongy, or trabecular, bone. These stages can take up to three or four months.

Stage four is the development of the cortical bone — the stronger, harder bone — which can take anywhere from six months to four years.

Osteopore’s technology aims to mimic the structure of bone at stages two and three, providing the architecture to house the stem cells needed to regenerate.

That scaffold then degrades over about 24 months, giving the bone enough time with a support structure to fully regrow and strengthen without embedding a permanent implant the body may or may not accept over time.

However, Professor Teoh emphasises that Osteopore is only one element needed for successful bone regrowth.

“For bone to move up quickly to late stage three and four, you need to apply stresses, such as loading bones with weight to stimulate stem cells and regrowth at an earlier stage,” he said.

“Unfortunately, many other scaffolds can’t take the kind of weight required, for example, for a leg bone. They fail. But with our implants and an experienced surgeon, we have found that we can see consolidation as early as the fourth month, if the early loading is undertaken.

“The scaffold with the proper mechano-induction, the micro architectural design and the proper surgical technique, will allow for faster healing.”

And in isolation, the global market for bone grafts is around $US4-5bn ($5.9-7.4bn). But Osteopore’s technology also has a much wider application.

Not only is it making replacements for small scale implants, the company has demonstrated its application in larger bone defects; situations where bone grafts could not be deployed, and the alternative for patients would be permanent implants.

The company has demonstrated clinical success in regeneration of forearms, shoulders and other orthopaedics, and is developing a range of additional products for markets such as dental surgery.

When taken alongside the tibia regeneration example, Osteopore has proved it can be effective in wider orthopaedics (medicine involving the skeleton), as well as developing products for jaw bone regeneration, potentially opening new billion-dollar market opportunities.

While the company lays the groundwork to enter new market, it will stay busy putting runs on the board with its existing commercial technologies.

By the end of last year, around 30,000 of Osteopore’s devices had been implanted. And of those, more than half have now passed the critical two-year mark designated as a key indicator of strong clinical outcomes.

This story was developed in collaboration with Osteopore, a Stockhead advertiser at the time of publishing. This story does not constitute financial product advice. You should consider obtaining independent advice before making any financial decisions.

Get the latest Stock & Small Caps news and insights direct to your inbox.