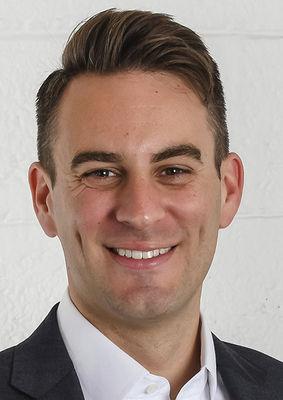 ELKHART — Josh Owens, the 34-year-old CEO of SupplyKick in Indianapolis, says improving Indiana schools would be his top priority if he is elected governor in 2020.

Owens, who announced his candidacy in the Democratic primary on Sept. 16, is the first openly gay candidate from a major party to seek the nomination for Indiana governor.

“Indiana really needs a bigger, a bolder, a more inclusive vision of our future, and I just don’t think that we’ve got the policies or, really, the leadership to get us to where we need to go,” Owens said Friday, as he was visiting Elkhart.

His vision is that every community in the state has a path forward and has the resources and support it needs to succeed, he said.

A former professor, Owens said he has taught over 2,000 Hoosier students at Butler University and Indiana University. SupplyKick, which he has led since 2016, was listed in Inc. 5000’s list of America’s fastest-growing businesses in 2018. The company, which has between 35 and 40 employees, helps companies sell their products online through Amazon.

He received a bachelor’s degree in economics from Wabash College in 2007 and a master’s degree in economic history from the London School of Economics and Political Science in 2012. He serves on the boards of TechPoint, Indy Chamber and the Orr Fellowship. He was previously chairman of the Indiana Charter School Board but has never held an elected office.

Owens’ top priority is improving education in the state, and a first step in doing that is increasing teacher pay, he said

“Our teachers are at the forefront of educating the next generation of Hoosiers, of creating a space in our communities that are welcoming and forward-looking in creating a future that we all are excited about,” Owens said.

Specifically, he is proposing increasing funding for teacher pay by $300 million annually, and he said he will do so without increasing taxes. That is, in part, because some of the money is already in the state budget.

He said there is a need for Rainy Day funds, but that the state is not striking the right balance between saving for tough times and making investments.

“If we’re not investing in our future, we better have a much better Rainy Day Fund,” Owens said.

Owens said he would also like to explore options for raising the minimum wage for all Hoosiers. The current minimum wage is $7.25 in Indiana, which is lower than in Ohio, Michigan and Illinois.

“We have very low unemployment, and yet wages have been relatively stagnant. That’s not a good scenario,” Owens said. “I want to be thoughtful about, what are the right wages that we can provide here in Indiana that make us competitive, that are thoughtful of the needs of different communities around the state. But I do think our floor wage, our minimum wage, is too low.”

Owens did not specify what level he would like the minimum wage to reach.

Indiana is also behind the times and at least one neighboring state when it comes to marijuana laws, the candidate believes.

“The current policies, in the ways that they have been enforced in communities, have been disproportionally biased towards minority communities,” Owens said.

If marijuana consumption, possession and production were to be legalized in Indiana, society would not only be more just but could also benefit from a nationally developing market that can help create jobs and innovation, he said. The tax revenue, he said, could be invested in improving health care.

Among Owens’ goals is also making Indiana a more welcoming and inclusive state, he said. Earlier this year, lawmakers approved a hate crime bill that did not include specific characteristics such as sexual orientation or race. Owens criticized Gov. Eric Holcomb, a Republican, for not taking a leadership role in getting a law that lists specifics.

Owens called it a “worst-case scenario” that a non-comprehensive bill was signed into law, because that may have taken the wind out of the sails for getting the bill that Owens and others are calling for.

“But I do think that I’m the person that can help ensure that we actually are getting the right policies in place,” he said.

Being the first openly gay major party candidate for governor in Indiana is significant to Owens.

“I look back to a 12-year-old Josh growing up in Shelbyville, Indiana, and certainly his outlook on life would be a lot different if there was a gay candidate for governor running at that time,” he said.

It has only been four years since former Gov. Mike Pence signed into law the Religious Freedom Restoration Act, which was criticized for potentially allowing discrimination against the LGBTQ community.

“I don’t think that you can be a member of the LGBTQ community here in Indiana and not have that scar as part of your experience,” Owens said.

The law was quickly amended as to not allow discrimination against LGBTQ persons, and Owens said the support that was shown to that community from people all over the state showed that Hoosiers largely want an inclusive state.

“We still don’t have all the laws that we need to be able to achieve that. That’s one of the reasons that I’m in this race,” he said.

In order to beat incumbent Holcomb, Owens must first win the May 5 Democratic primary, where the only current opposition is former Indiana Health Commissioner Woody Myers.

Owens said he and Myers, who has a medical background, share many goals but that a background in education and business is what Indiana needs.

He acknowledged that Myers and Holcomb may well have better name recognition but said no candidate is really a household name, so he believes he can overcome that barrier through campaigning all over the state. Owens said he has members on his campaign team that worked for the party’s 2016 nominee, John Gregg.

“We are actively going after having conversations with Hoosiers and with Democrats everywhere, and I think the reception has been fantastic,” Owens said.

He said his team is well under way to collect the 4,500 signatures that are required to be on the ballot on May 5.