Digital dance a weekend of entertainment with Verb, DanceCleveland 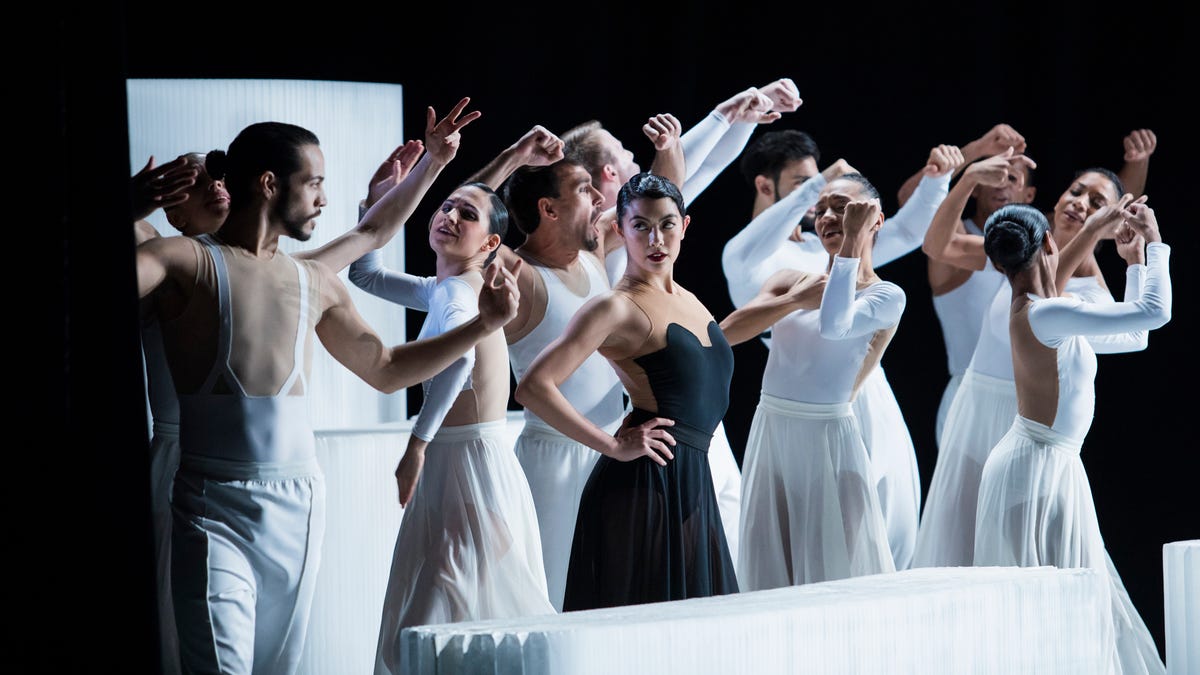 Digital dance a weekend of entertainment with Verb, DanceCleveland

Verb’s varied program started with a performance of Rocye Zackery’s 2010 “Grace,” featuring four male-female couples. The dance’s movement and costumes had a clean look, with the women in simple white dresses and men in white shirts with khaki pants.

Set to the elegantly classical Beethoven’s Andante Cantabile con Variazioni from his String Quintet in C minor, “Grace” had a delightful musicality. The contemporary ballet’s mood shifted from a melancholy, slow section, followed by silence as the women sat on the floor, to a spritely up-tempo section featuring just the women — Emily Dietz, Kelly Korfhage, Lieneke Matte and Kate Webb.

The story behind the dance’s grace is that choreographer Zackery created the work as a tribute to the elegance and grace of his mother through illnesses and death in their family. He is a dance professor at Howard University in Washington., D.C.

All dancers were masked for the full program. The company put up a pipe-and-drape system as well as lighitng and sound to turn the studio into a black-box theater. Wasted Talent Media of Akron filmed the performance.

Nothing beats live performance when it comes to dance, of course, and the film quality looked like it was lacking in definition. That may have had something to do with the effect of floor lighting behind the dancers in the performance space.

Nevertheless, as an audience member, I was happy to see the dancers performing live in the safest way possible.

As the dancers changed after “Grace,” viewers got an inside look into the dance process through taped interviews with Jane Startzman, who owns the rights to Heinz Poll’s signature “Adagio for Two Dancers” and Richard Dickinson, who choreographed the world premiere “KL3668.”

Next was the heavenly “Adagio for Two Dancers,” Poll’s 1973 neoclassical work set to Tomas Albinoni’s Adagio for Strings and Organ. Viewers who saw Korfhage and Benjamin Shepard perform the piece in the 2019 Heinz Poll Summer Dance Festival were again treated to their exquisite partnering. The highly connected dancers luxuriated in love in this serenely slow duet.

Clad in gold unitards, they were framed by a beautiful projection of a cathedral stained glass window, with Thomas Skelton’s original lighting re-created by Christopher Pepe.

Finally, the premiere of Dickinson’s “KL3668” featured the full 13-member company, led by Webb and Hunter Hoffman. Dickinson was inspired by Ravel’s Sonata for violin and cello to create the eclectically styled work.

It was gripping to watch tension grow between Webb and Hoffman, as he held her high with her body stiff and straight, while the tension grew with the strings climbing the scale in the musical accompaniment.

The next digital stream that Verb Ballets will offer is “Carnivale Macabre,” created as a rock ballet filmed with virtuoso guitarist Neil Zaza of Stow. The cinematic dance rock experience will stream for Halloween weekend, from 7 p.m. Oct. 30 to 7 p.m. Nov. 1. Cost is $25. See www.verbballets.org.

On Saturday night, DanceCleveland’s stream of Ballet Hispanico’s “Carmen.maquia” was stunning to watch, with dramatic black and white costuming inspired by Picasso’s work and a neutral, white paper set that was moved in different configurations.

The passionate, highly sensual contemporary dance by Gustavo Ramírez Sansano is a reimagining of the classic “Carmen” opera by Georges Bizet. It premiered in New York in 2014 and was filmed in 2015 for Lincoln Center at the Movies.

This dance features a stunning death scene. Just before, we know that Carmen and Don Jose have been fighting. But after a blackout, the lighting comes up to show them standing in an extremely close embrace. It takes a moment before the sick realization comes that this is the final moment of Carmen’s life, as she crumples to the floor.

The next offering in the “Fall for DanceCleveland” virtual dance series is Los Angeles-based Contra-Tiempo at 7 p.m. Saturday, featuring Artistic Director Ana Maria Alvarez’s “Agua Furiosa.” The dark piece, which looks at the harsh realities of race in the United States, was inspired by Shakespeare’s “The Tempest” and Oya, the Afron-Cuban deity of wind and storms.