Curators’ Choice on Art and Politics 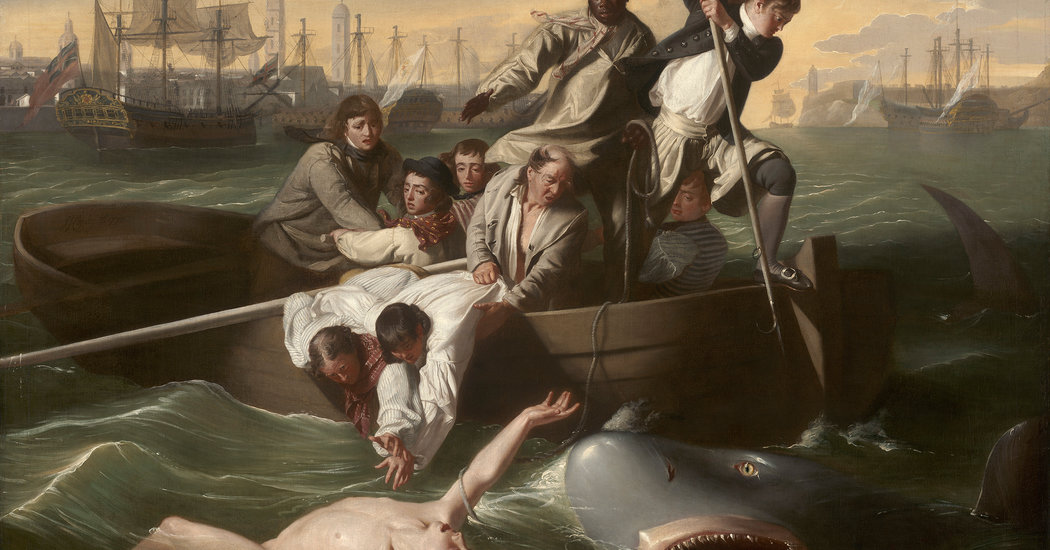 Curators’ Choice on Art and Politics

This article is part of our latest Museums special section, which focuses on the intersection of art and politics.

Two of the world’s great art institutions, the Metropolitan Museum of Art and the Museum of Fine Arts, Boston, turn 150 years old in 2020. We asked curators at both to pick their favorite works that touch on American political life, either on view at their museums now or coming soon.

“Watson and the Shark” (1778) by John Singleton Copley

Layla Bermeo, associate curator of paintings, Art of the Americas

Above a tangle of bodies and windblown clothes, a black sailor stands with his hand outstretched, mirroring the gesture of the boy, Brook Watson, flailing in the water. Some see him as powerless, others as heroic — either way, I see the most beautifully painted person of color in early American art. With sharks circling in Havana harbor, this painting evokes the dangers and uncertainties of life in the Americas just two years after the Declaration of Independence, when freedom and financial stability were intimately bound to smuggling and slavery. ​

Margaret Bourke-White’s landmark 1937 photograph of the Great Depression, soon to be featured in the MFA exhibition “Life Magazine and the Power of Photography,” symbolizes the anxiety of an epoch and reminds me of the tensions in today’s polarized society. Evoking disparities between advertising and reality, she juxtaposes a billboard featuring a smiling white family above a line of black Americans waiting for flood relief. It calls into question, for me, the concept of “an American way.”

Quilts such as this example by Irene Williams of Gee’s Bend, Ala., are a reminder of how women, primarily restricted to the domestic sphere, have often turned to needlework to express themselves. We can only speculate that in using the VOTE fabric, Irene Williams might be recalling her community’s struggle over voting rights during the tumultuous civil rights movement of the 1960s. But as Williams understood, it is only by making our voices heard that we can move toward greater understanding and create change.

Robert Frank, who died in September at age 94, made this unforgettable photograph in New Orleans. The image — a poignant record of 1950s segregation in the American South and a treasure in the Met’s Gilman Paper Company Collection — appears in “The Americans,” Frank’s landmark book first published in 1958. In the introduction, Jack Kerouac noted that Frank had “sucked a sad poem right out of America onto film, taking rank among the tragic poets of the world.”

This vivid panel from Lawrence’s “Struggle: From the History of the American People” series — to be featured in a landmark exhibition at the Met in June — epitomizes the leading modernist’s counternarrative approach to the early history of the United States, bringing a fresh perspective to an iconic subject, Washington’s crossing of the Delaware River near Trenton, N.J., on Christmas night, 1776. In this inversion of other renditions, Lawrence places in the foreground the collective action of anonymous soldiers, rather than glorifying a single heroic leader.

Of Warhol’s iconic works, his series focusing on Jackie Kennedy are among his most powerful. This one in particular captures her in the moments just before her husband was assassinated. It’s an especially remarkable image because we know what is about to happen — the tension is dreadful. To our eyes now, it represents innocence on the brink of being betrayed, not just for this widely beloved public figure and family, but for a nation. Warhol draws on the distinct power that images play in politics and the media, as the pictures we see — or perhaps don’t see — are often what drive our emotions and our decisions.