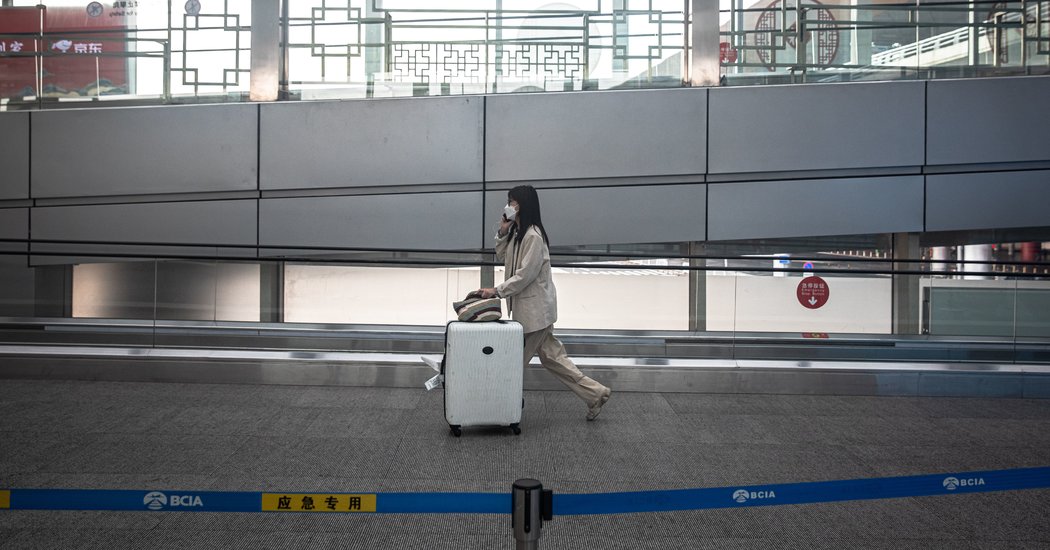 Major cities across China have announced new travel restrictions on people who have recently visited countries where coronavirus infections are on the rise.

On Tuesday, the authorities in Shanghai said that all travelers entering the city who have visited countries with significant outbreaks within the last two weeks must undergo a 14-day quarantine at home or at an approved isolation facility. Officials in Guangdong Province announced similar measures, the state media reported on Tuesday.

And a city official in Beijing announced on Tuesday that all arrivals into the capital from countries struggling with outbreaks — including South Korea, Italy, Iran and Japan — will be subject to a 14-day quarantine.

At least 13 people in China were found to be infected with the coronavirus after returning from countries such as Iran and Italy, two places that have seen some of the most severe outbreaks outside of Asia in recent days, according to the authorities.

A 31-year-old Chinese woman had worked in a restaurant in the Italian city of Bergamo before returning home to Qingtian County, in the southeastern province of Zhejiang, where she tested positive for the virus. Seven more people who worked at the same restaurant in Bergamo were later found to be infected after they returned to Zhejiang, according to the local authorities.

In recent days, county officials in Qingtian have urged overseas residents to reconsider any plans to return home, citing the challenges they could pose to China’s efforts to control the epidemic.

As China’s outbreak wanes, clusters boom around the world.

China reported its lowest number of new coronavirus cases in more than a month on Tuesday, but the epidemic showed little signs of waning elsewhere. Three countries — South Korea, Italy and Iran — each had at least 1,000 total cases and the number of infections in the United States topped 100.

The country’s efforts to control the spread, included limiting the movements of 700 million people. In Hubei Province, where the epidemic erupted and where the overwhelming majority of cases have been identified, 2,410 patients were released from hospitals and emergency clinics.

Experts, however, cautioned that the real test will be when China lifts its lockdown orders and millions of people return to work.

But clusters outside of China showed troubling signs of growing. In South Korea, site of the second-largest outbreak, the number rose on Monday to more than 4,800, nearly double the caseload on Friday. The rate of increase was even faster in Europe, where officials warned residents to prepare for large outbreaks.

And in Iran, the scale of the largest outbreak in the Middle East remained unclear, with the government confirming 1,501 cases and public health experts expressing concern that the official numbers were unreliable.

Asian markets followed Wall Street’s surge, though at a more modest pace, with stocks in Tokyo and Hong Kong up less than 1 percent by midday on Tuesday. Investors were betting that world leaders and central banks would unveil some sort of coordinated action to prevent the coronavirus from plunging the world into recession.

Australia provided an early taste. On Tuesday its central bank lowered a key lending rate by one-quarter of a percentage point, making it cheaper to borrow money from the country’s lenders.

Six people have died in the United States, including residents of a nursing care facility.

The coronavirus killed three more residents of a nursing care facility near Seattle on Monday, raising the death toll in the area to six. And as the number of new cases rose nationwide, officials around the United States raced to assess the risk to schools, medical centers and businesses.

All of the U.S. fatalities have been in Washington State, where leaders in the Seattle area said that they intend to open isolation centers. Four of those killed were residents of the Life Care Center nursing home in Kirkland, a Seattle suburb, that has become the focal point of fears that the virus may have been spreading for weeks undetected.

In Oregon, dozens of personnel at Kaiser Permanente Westside Medical Center in Hillsboro have been placed on paid furlough after coming in contact with coronavirus patients there. They have been asked to remain in self isolation at home for 14 days, officials with Kaiser Permanente said.

The number of cases nationwide climbed to 100, and infected patients have been treated in 14 states.

The new cases included a woman in Manhattan who contracted the virus while traveling in Iran, and a Florida man with no known contact with affected countries or people. After that man and another person tested positive, Florida declared a public health emergency.

China requires citizens to use a smartphone app that dictates if they should be quarantined.

As China encourages people to return to work despite the coronavirus outbreak, it has begun a bold mass experiment in using data to regulate citizens’ lives — by requiring them to use software on their smartphones that dictates whether they should be quarantined or allowed into subways, malls and other public spaces.

But a New York Times analysis of the software’s code found that the system does more than decide in real time whether someone poses a contagion risk. It also appears to share information with the police, setting a template for new forms of automated social control that could persist long after the epidemic subsides.

The Alipay Health Code, as China’s official news media has called the system, was first introduced in the eastern city of Hangzhou — a project by the local government with the help of Ant Financial, a sister company of the e-commerce giant Alibaba.

Neither the company nor Chinese officials have explained in detail how the system classifies people. That has caused fear and bewilderment among those who are ordered to isolate themselves and have no idea why.

Such surveillance creep would have historical precedent, said Maya Wang, a China researcher for Human Rights Watch. China has a record of using major events, including the 2008 Beijing Olympics and the 2010 World Expo in Shanghai, to introduce new monitoring tools that outlast their original purpose, Ms. Wang said.

“The coronavirus outbreak is proving to be one of those landmarks in the history of the spread of mass surveillance in China,” she said.

The Trump administration said on Monday that nearly a million tests could be administered for the coronavirus in the United States by the end of this week, a significant escalation of screening as the American death toll reached six and U.S. infections topped 100.

Private companies and academic laboratories have been pulled in to develop and validate their own coronavirus tests, a move to get around a government bottleneck after a halting start, and to widen the range and number of Americans screened for the virus, Dr. Stephen Hahn, the commissioner of the Food and Drug Administration, said Monday at a White House briefing.

The testing expansion comes as the world moves in a more coordinated fashion to confront the virus and its threat to health and the global economy. The Group of 7 industrialized nations is expected to hold an emergency call on Tuesday to synchronize a multinational effort to stimulate economic growth, the first such effort since the global financial crisis more than a decade ago.

President Trump says his job is to protect American patients.

President Trump spoke about his efforts to limit the spread of coronavirus in the United States during a rally on Monday evening in Charlotte, N.C.:

My administration is also taking the most aggressive action in modern history to protect Americans from the coronavirus. You know about this whole thing, horrible. Including sweeping travel restrictions. Today, we met with the big great pharmaceutical companies, and they’re really working hard and they’re working smart, and we had some — we had a great meeting today with a lot of the great companies and they could have vaccines I think relatively soon.

And they’re going to have something that makes you better, and that’s going to actually take place we think even sooner. So it’s — a lot of good things are happening. But we have strong borders and really are tough, and early actions have really been proven to be 100 percent right. We went out, we’re doing everything in our power to keep the sick and infected people from coming into our country. We’re working on that very hard.

My job is to protect the health of American patients and Americans first. Washington Democrats are trying to politicize the coronavirus, denigrating the noble work of our public health professionals, but honestly not so much anymore. Everyone appreciates — these are the greatest professionals in the world at what they do.

We’re going to reduce the severity of what’s happening. The duration of the virus, we discussed all of these things, we will bring these therapies to market as rapidly as possible. And I have to say with a thriving economy, the way it is, and the most advanced health system on Earth, America is so resilient, we know what we’re doing. We have the greatest people on Earth, the greatest health system on Earth.

Defense secretary warns commanders not to surprise Trump on coronavirus.

Defense Secretary Mark T. Esper has urged American military commanders overseas not to make any decisions related to the coronavirus that might surprise the White House or run afoul of President Trump’s messaging on the growing health challenge, American officials said.

Mr. Esper’s directive, delivered last week during a video teleconference call with combatant commanders around the world, is the latest iteration of Mr. Trump’s efforts to manage public fears over the disease, even as it continues to spread around the world.

Mr. Trump has said Democrats and the news media are stoking fear about the disease, even calling their concerns a “hoax” during one rally last week.

The president has since tempered his words.

Mr. Esper told commanders deployed overseas that they should check in before making decisions related to protecting their troops.

In one exchange during last Wednesday’s video teleconference, Gen. Robert B. Abrams, the commander of American forces in South Korea, where more than 4,000 coronavirus cases have been detected, discussed his options to protect American military personnel against the virus, said one American official briefed on the call.

In response, Mr. Esper said he wanted advance notice before General Abrams or any other commander made decisions related to protecting their troops.