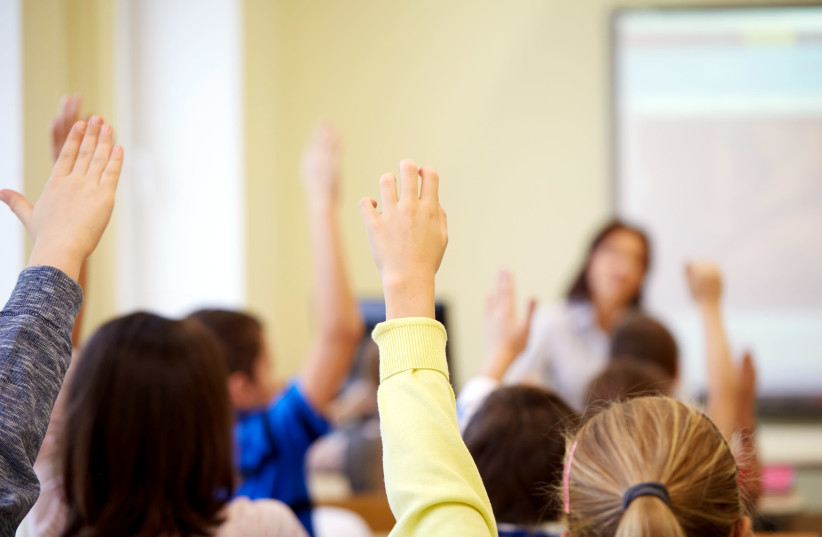 The Education Committee of the Knesset approved a change to proposed lockdown regulations that would allow students of all ages to continue in-person learning, but before parents could breathe a sigh of relief, the Teachers Union declared a labor dispute on Sunday afternoon and demanded that all teaching staff be vaccinated immediately. Yaffa Ben-David, the secretary general of the Teachers Union, said, “If there are no vaccines, there will be no studies — we will not agree to abandon the health of teaching staff.”Teaching staff have not yet been vaccinated against the coronavirus. The Teachers’ Union will be able to suspend studies until this dispute is resolved — both sides have until January 12 to settle  — including the distanced-learning program and online learning. The Histadrut has demanded that the teaching staff who want to be allowed to get vaccinated, but the Health and Education Ministries have not officially set this up yet. Currently, vaccines are given to medical staff, people over 60 and people with medical conditions that put them at high risk. Ben-David said, “It is not possible for teaching staff to sacrifice themselves while all Israeli citizens are in quarantine and the state will not take care of their health protection. There is no reason not to vaccinate the teaching staff. “Ben-David added that even according to the Health Ministry, teaching staff are at high risk. “Just a few days ago, the Health Ministry published a report according to which teaching staff are at a high risk of infection, at a rate of 50 percent, relative to the general population.”Ben-David said that the teachers’ union would not hesitate to take further steps. “If the problem is not resolved, we will not hesitate and take organizational measures — including sanctions and a strike.”

The teachers’ union has declared a labor dispute demanding that all teaching staff be vaccinated. Histadrut Secretary General Yaffa Ben-David: “If there are no vaccines, there will be no studies – we will not agree to abandon the health of teaching staff.”Earlier on Sunday, Ram Shefa, head of the Knesset Education Committee, pushed for this change, since these grades were originally planned to go into full-time remote learning in the third lockdown. They currently learn through a combination of in-persona and remote learning. In a Tweet he posted on Saturday night, he said, “I will not allow Netanyahu’s campaign considerations to harm the children of Israel. Fifth to tenth graders are neglected and must not be held hostage to arbitrary and destructive decisions. Tomorrow in the Education Committee I will stop the default and make sure they get back to school soon.”The issue of school closings is perhaps the most contentious one in the current lockdown proposal.Originally, the proposal was for preschools and grades 1-4 and 11-12 to stay open but only study from 8 a.m. until 1 p.m., while children in other grades would stay home. The rationale was that there is no reason to keep young children at home, since their rate of infection is extremely low, while those in the last two years of high school have to prepare for their matriculation exams.Thursday afternoon, after a great deal of protest on the part of parents, municipal authorities and medical experts, the government changed its mind and decided that those going to school could remain there for regular days. And pressure of over the weekend has pushed back the original education proposal even further. In the new plan, preschools and kindergartens will operate as usual, as will the younger grades. The high schoolers will be broken into capsules and allowed to interact with up to three capsules; teachers will be able to instruct up to four capsules.Some parents had called for Zoom classes on Sunday to be cancelled in protest when it seemed that grades 5-10 would be home full-time during the third lockdown. The National Parents Organization said in a statement, prior to the reversal of the decision, “We will not allow the members of the cabinet to continue abusing our children.”Many medical experts outside the Health Ministry had questioned the wisdom of closing the schools during the third lockdown. Dr. Alexander Gileles-Hillel, a pediatrician who specializes in pulmonology at Hadassah-University Medical Center in Jerusalem told the Jerusalem Post when the third lockdown rules were first proposed last week, “In areas that are green, there is no reason at all to close the schools.”Gezer Regional Council head Rotem Yadlin spoke at the Education Committee meeting on Sunday and called for the entire education system to remain open, saying, “this health crisis is not just corona, it is the mental crisis that affects girls and boys across the country. And someone needs to understand the size of the fracture that will stay with us even after the corona is gone.”Ninth graders have been in school for a total of six days since the second closure,” she said. “They are home alone most of the day, in front of the computer, and we see a dramatic increase in suicides, obesity, addictions and depression among teens.”Children need a teacher who will look them in the eye, who will recognize the distress before it develops,” Yadlin said. “We cannot continue to turn a blind eye to them.”She said that an effective solution that had been proposed was a return to the traffic-light plan, with different rules for parts of the country according to morbidity rates. “This encourages the authorities to reduce morbidity – and at the same time, the teaching staff should be vaccinated and return to school.”Michal Cohen, former director general of the Education Ministry and member of the Corona Project Advisory Committee welcomed the reversal on the fifth-tenth graders Sunday, saying, “It’s good for fifth- to tenth-grade students to go to school — there is no health justification for staying home and this is a correction to the corona cabinet’s unfortunate decision. If schools with multiple infections are discovered, differential closure may be considered, but this should not prevent hundreds of thousands of other students from entering schools. More than it is a pedagogical need – it is a mental need.”(Jon Medved)During the debate on Thursday, the head of the Teachers Union, Yaffa Ben David, said that teaching staff should be vaccinated as quickly as possible. She posted on her Facebook page: “Our requirement is basic – working conditions that provide protection for the health of educational staff. It is unthinkable that the teaching workers who are on the frontline will not be vaccinated. If this situation continues, we will take all measures to require the country to protect them.״Health Minister Yuli Edelstein announced Saturday night that he had instructed the director general of his ministry, Prof. Chezy Levy, to facilitate the vaccination of teaching staff.