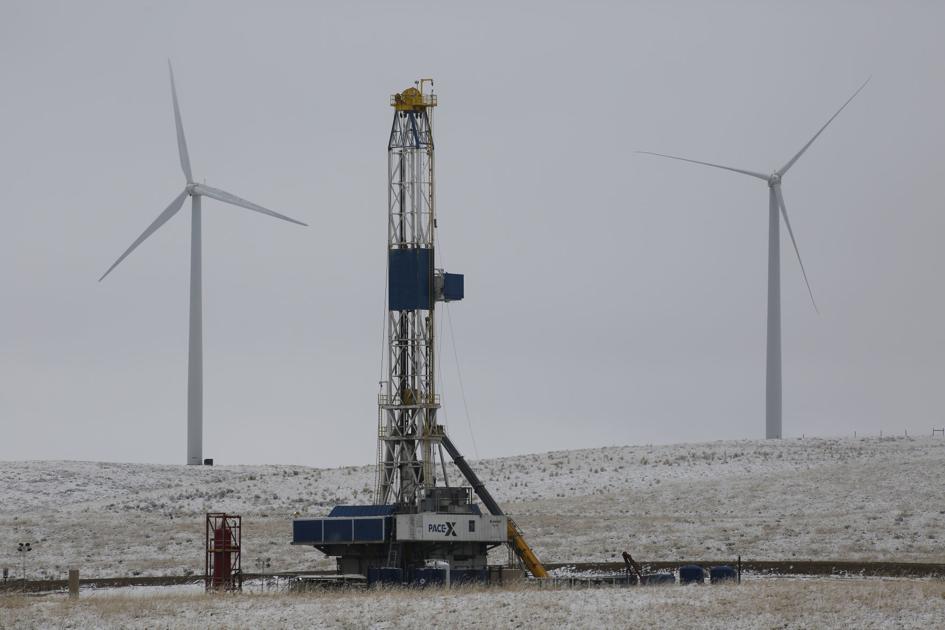 DOUGLAS — Three years ago, you didn’t see too many oversized loads rumbling through the county. Douglas felt weary and empty. Few cranes jutted out on the horizon, and only rarely did you see long stretches of exposed earth, marking new pipelines.

Today, Converse County is bursting with construction activity, leading to sales tax numbers that have reached the highs of the last boom in 2014. With another four months at the current pace, the City of Douglas will set an all-time sales tax record. Eight months into the fiscal year, Douglas is averaging $1.4 million in sales tax distribution per month, and has taken in 173 percent of what it budgeted for FY 2019.

Residents can see the new gas plants and pipelines, but it’s harder to intuit the amount of crude and gas flowing underfoot. According to the Wyoming Oil and Gas Conservation Commission, Converse County shattered its all-time oil and gas production records in 2018. On the year, the county produced 23 million barrels of oil and 87 million Mcf of natural gas.

Prior to breaking the record, the county’s previous high for oil had been 17 million barrels back in 2015. The old gas high had come just last year, with 52 million Mcf.

“If you had asked me 10 years ago, I wouldn’t have guessed it,” WOGCC Supervisor Mark Watson said about Converse County leading the state in oil production. “It’s the horizontal technology and the completion hydraulic fracturing technology that has really helped Converse County, because they’re basically drilling into formations that were producing in the ’70s.”

EOG led the county in oil production last year, with well over 5 million barrels of oil produced on its own. Chesapeake came up just short of first place, also producing over 5 million barrels. Devon took third, and after those three, no one was close. Chesapeake led the way in gas production with more than 38 million Mcf, followed by EOG with 25 million Mcf, with Devon taking a distant bronze.

While major projects like gas plants and pipelines lead to relatively quick boosts in county and city sales taxes, Converse County Treasurer Joel Schell explained that the record production numbers won’t be reflected in county revenues until the fall.

“There’s always this lag for production,” he explained. According to Schell, revenues from production might not be as eye-catching as the short term spikes associated with new development, but they’re crucial for the county’s longterm economic health.

“Sales tax is a short-term spike,” Schell said. “You need the production to sustain you when (high sales tax revenues) are gone.”

Unlike infrastructure investment, revenues from oil and gas can fluctuate significantly depending on the price of a barrel and thousand cubic foot (Mcf).

“We could have production go up 20 percent, but then if the price drops 20 percent we’re sort of in the same place,” Schell said. “That’s sort of an issue with gas. Gas has been so cheap, we’ve always said it takes billions of Mcf to move the revenue number . . . Gas is becoming more of a player, in terms of value.”

In 2018, gas accounted for 9 percent of the county’s value, compared to 45 percent for oil. That’s a bit of an increase for gas.

Converse County Commissioner Jim Willox has said that the increased importance of gas makes this boom different. He also noted that as infrastructure improves, so does Converse County’s financial stability.

“I think the more infrastructure we get in the ground, the more it will smooth out, not eliminate, the ups and downs that are caused by the spot prices on the market,” Willox said.

Companies can better weather the ebbs and flows of the international market when they have better access to pipelines and gas refinement. When pipelines and plants are in place, and companies can save money on transportation costs and processing, a drop in the price of a barrel can be a less devastating blow.

Converse County Assessor Dixie Huxtable said that it’s too soon for her to know the exact ramifications of the record production, but added that the county is likely to see its highest valuation in history.

Like many tuned in to the goings-on of the oil and gas industry in Converse County, Huxtable believes that some stability, at least in a monthly timeframe, should be expected.

“That all depends on the price of oil,” he said. “They can make a change of plans in a heartbeat.”

Provided oil doesn’t tank, Watson said he expects the next couple of years to be “just as busy,” as 2018, and pointed out that major operators like consistency.

“The companies like Chesapeake and EOG, they have plans by the year,” Watson said. “They only change it if there’s a major increase or decrease.”

Predicting the oil and gas industry is nearly impossible, but there are indicators that operators are high on Converse County and the Powder River Basin. The WOGCC has seen astronomical numbers of applications for permits to drill (APDs) for the county.

As of press time, the WOGCC had 14,609 issued permits, and another 11,642 permits waiting on approval. The county currently has 1,821 completed wells, so if companies decide to act on their permits, that well figure is likely to grow substantially. In December, 1,301 oil wells produced at least one barrel of oil in the county, and 990 produced at least one Mcf (lots of wells produce both – there’s overlap). The leading well pumped out 62,164 barrels during the month, while the top gas well managed 197,290 Mcf.

It is highly unlikely that all of those permits will lead to new wells.

“What percentage of those (permits) will be drilled, it’s hard to say,” Watson said. “It won’t equate to actual wells drilled.”

Watson said that the number of permits is a good sign.

“It bodes well that these companies . . . they’re pretty positive on the Powder River basin,” he said. “Every time (new wells) complete, they get better and better.”