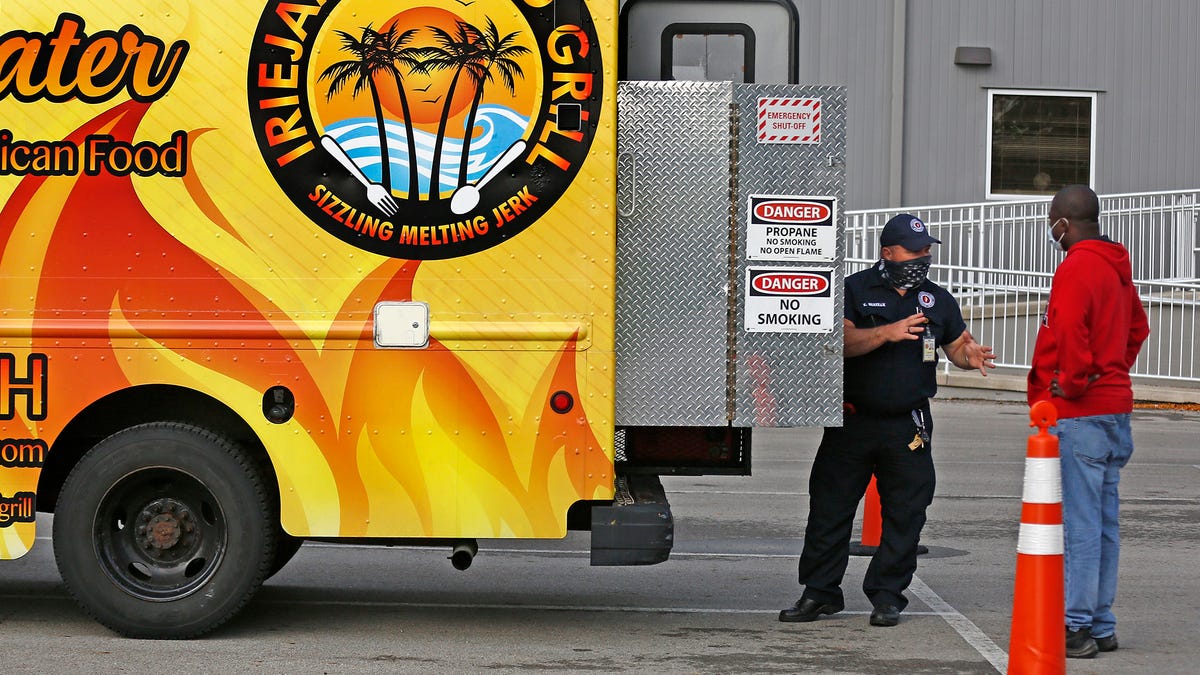 After already logging some 180,000 miles as a Postal Service delivery vehicle, the aging 2003 step van began a new life when Augustine and Kesia Boamah purchased it in December 2018.

But the truck needed some work just to be able to drive it back to Columbus from the federal surplus auction where they bought it in Toledo.

“It had some stuff leaking from the front,” said Augustine Boamah, 41, an IT technician, The couple put up about $40,000 to completely transform the vehicle from mail runner to food truck, including the cost of the bright yellow paint job.

The couple’s food truck and associated catering service, Iriejam Island Grill, specializing in a blend of West African and Jamaican cuisine, was doing so well at one point that  Kesia was considering quitting her job at a local bank and devoting herself to it full time, Boamah said.

But they are now among about 350 food trucks that traverse Columbus streets, part of an industry whose sales nationally grew by about 7.5% annually from 2015 to 2020 — more than triple the growth of traditional brick-and-mortar restaurants, according to research firm IBISWorld.

But the food truck fleet has brought with it unique safety concerns, with their potentially explosive, pressurized propane-gas tanks topping the list, safety officials say. Unlike traditional restaurants, the propane tanks are under pressure and the gas lines leading from them to the trucks’ ovens and burners are constantly being shaken and jarred as they drive from gig to gig, creating the potential for leaks that could be deadly.

Initially, inspectors were concerned about road-worthiness issues, but then started to quickly hone in on the propane tanks and lines as being the biggest potential hazard.

At an inspection Tuesday on the East Side that city inspection officials call “the rodeo” because the one-day event attracts dozens of colorful food trucks needing to pass muster to be licensed, one truck had two 100-pound propane tanks attached to the rear wall.

“When we first had them, they were putting (the tanks) on the deck, on the step, and if you got rear-ended, it was all over,” Jones said. “The propane tank that you use at home, the 20-pound, that’s the equivalent of three sticks of dynamite.”

Social media is ablaze with video of what happens when a food truck experiences a gas leak or explosion — and it isn’t pretty.

That’s why Columbus firefighter Kent Wareham gave the tank on the Boamahs’ truck the once-over. It was secured inside a stainless-steel box, which is good, but it was a little loose inside and could shake around as the truck drove, which is bad. Wareham instructed Boamah to tighten it down to lessen the potential for leaks.

“You’re going to have developing a micro-fracture in the lines, or they’re affecting the regulators, so our goal is to keep them as secure as possible,” Wareham said after the inspection, in which he also demanded more up-to-date fire extinguishers be put in place on board.

“I’m not going to sign off on any paperwork if the truck, trailer or cart is not 100%,” Wareham said. “I only get to see these (food trucks) guaranteed once a year, so that one time I see them, they’re going to be perfect or they’re not going to get licensed.

“We call it the rodeo, because that’s exactly what it’s like, it’s a rodeo. We’re rounding them up and we’re inspecting them,” Wareham said. “For the most part they’re very minor infractions. Doesn’t take much to get them fixed.”

The extended license will come just in time for the Boamahs. After the COVID-19 pandemic struck in March, they shuttered the truck for several months due to a lack of business, putting on hold Kesia’s plans to quit her bank job. Things started to bounce back this summer.

“We just started getting back out. July, August was good, and September it seems to be slowing down,” Augustine said. “I think September in general is a slow month sales-wise.”