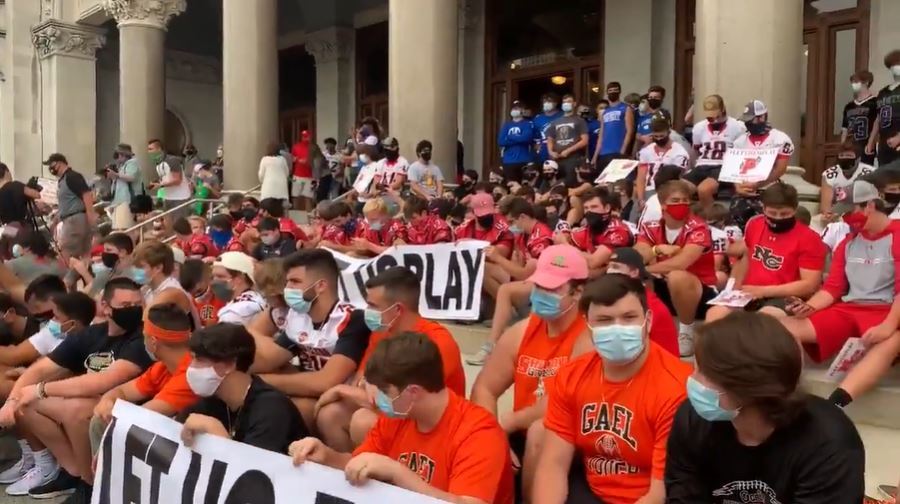 The governor has called for the state
Department of Health to meet with the Connecticut
Interscholastic Athletic Conference about how to
safely hold school sports and the meeting is happening this morning.

The meeting comes days after more than 1,000 high school athletes and their supporters rallied on the steps of the State Capitol to protest CIAC’s decision last week to cancel full-contact football for the season due to the COVID-19 pandemic.

More than 1,000 people gathered at the Capitol calling for a fall high school football season.

CIAC decided that it would not move forward with 11-on-11 football games after hearing from the Connecticut Department of Public Health that the agency considered it a high-risk activity and would not support the playing of those games.

The CIAC announced its decision to cancel full contact football for the fall sports season. Coaches and players reacted to the news.

Many critics of the decision have argued that the
state’s COVID-19 infection rate is one of the lowest in the country and that
other contact sports are being allowed to play this fall.

Gov. Ned
Lamont said Tuesday that he would like to see a football season, possibly played in February and March, and that he would be willing to sit down with the
Department of Public Health and football leagues to discuss it.

“We’re here to listen to ideas from CIAC, come forward
with something constructive but I would like to see football played sometime,
that’s for sure,” Lamont said.

Glenn Lungarini, the executive director of CIAC, said
the organization has offered options.

“There’s an extensive list of mitigating
strategies that we have offered and that’s where we would just like an
understanding of what more are you looking for that we’re not offering right
now? What is being done as mitigating strategies in other private sectors that
are allowing those high risk sports to go that we’re not offering?” Lungarini
said.