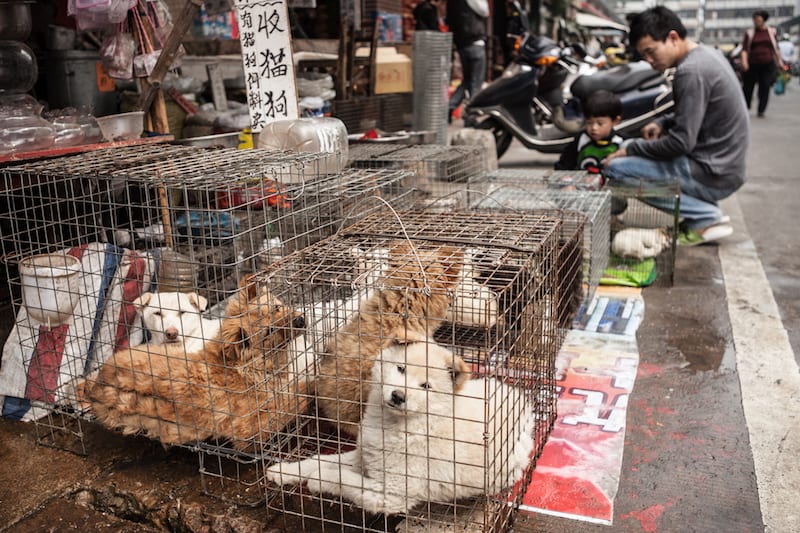 The agriculture ministry of China has released a draft policy that could illegalize canine meat consumption.

Calling dogs a “special companion animal”, the China’s Ministry of Agricultural and Rural Affairs excluded cats and dogs in a draft that “white lists” animals allowed to be raised for meat such as pigs, ducks, and chickens.

The new draft policy follows Shenzhen’s move in becoming the first ever city in mainland China to announce a ban on consuming dog and cat meat.

The ban will likely be implemented in Shenzhen from the beginning of May.

“With the progress of human civilization and the public’s concern and preference for animal protection, dogs have changed from traditional domestic animals to companion animals,” said the ministry in a statement.

The Humane Society International (HSI) has been campaigning to end Asia’s dog meat trade for years. According to the charity, every year, around 10 million dogs are killed for their meat in China and believes the proposed draft policy could be a “game changer moment for animal welfare in China”.

In a statement, HSI’s director of international media, Wendy Higgins, said: “It is incredibly encouraging now to see a draft on the table in mainland China that could effectively ban the eating of dogs and cats,”

“Tens of millions of dogs and cats every year, mostly stolen pets, suffer the agonies of the brutal meat trade,” she continued.

“There is no greater desire to see it end than among Chinese animal groups and animal lovers themselves.”

While the agriculture ministry cited concerns over animal welfare and prevention of disease transmission as factors behind the move, the updated list does include several wildlife species such as deer, game birds, minks, and two kinds of foxes, among others that will be allowed to be farmed under animal husbandry laws raising concerns from animal activists.

“Rebranding wildlife as livestock doesn’t alter the fact that there are insurmountable challenges to keeping these species in farm environments, their welfare needs simply can’t be met.

“In addition, there’s clear evidence that some of these species can act as intermediate hosts of viruses, such as Covid-19, which is why we’re urging China and all governments to stop trading in wildlife.”

The ongoing coronavirus pandemic was first transmitted to humans at a meat market in Wuhan, China. Animal rights activists have urged populations around the world to ditch meat to avoid a repeat of the pandemic.

The virus has killed more than 95758 at the time of writing.

Share this article to reveal the dangers associated with the meat industry.

The Totally Vegan Buzz Team are a gang of extremely entertaining writers who also happen to be vegan. Together, they bring you all the vegan infotainment you need – trends, news, quizzes and more. Leave them a comment! They love it when you guys say hi…