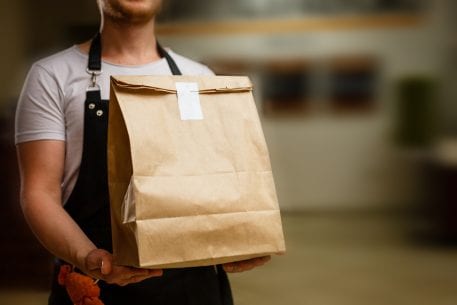 As the year winds down — and people are more tempted to order food delivery thanks to bad weather or the simple desire to relax during the holiday season — questions about what’s next for the crowded food delivery space are increasing. There is talk about mergers and consolidation even as the world of restaurant delivery platforms keeps expanding.

Take just one bit of recent news, this one about GrubHub. In November, Barclays has raised its investment opinion of Grubhub, positing that a few key moves could significantly change the future outlook of the company, according to a report by Bloomberg. Analyst Deepak Mathivanan said the “irrational competitive landscape” throughout the food delivery marketplace and Grubhub leaders’ “ill-timed strategic investments, and poor execution” made the stock lose three-quarters of its value to reach the lowest point in two years. Mathivanan urged the company’s board of directors to consider some changes, and upgraded the rating “on the hope of swift execution.”

He asked that Grubhub “reduce investments on unproven areas.” He said there hadn’t been much result from the company’s $100 million in marketing investment over the last year, and that Grubhub’s plans to spend $150 million on “other unproven strategies” won’t help. Another suggestion is to explore a merger with another leading food delivery company, which could result in “meaningful synergies.”

Concerns about synergies and merges are not the only significant trends in this space as the last month of the decade begins. So-called cloud kitchens are also having a moment. A group of former Uber employees has started a cloud kitchen business to rival that of former Uber CEO Travis Kalanick, who made the news recently with his similar business CloudKitchens, according to reports.

The startup, located in Oakland, California, aims to facilitate food deliveries for nearby restaurants that receive high volumes of orders from delivery companies like Uber Eats. The company, called Virtual Kitchen Co., recently announced a $15 million investment from notable names like Andreessen Horowitz, Base10 Partners and others.

Uber also recently dabbled in the cloud kitchen space, but had to stop doing so because the venture was too capital-intensive, and the company is struggling with its own issues due to lower stock prices and lack of profitability. However, the company said it is not worried about a new rival. “Anything that supercharges the selection for customers is great for all of us,” said Janelle Sallenave, head of Uber Eats in the U.S. and Canada.

In the new decade, payments — including tips — also promise to play a more significant role in the food delivery space. DoorDash provided a recent example of some of the main issues in play in this area of delivery, restaurant commerce and gig work. The online delivery service announced that it has a new pay model that aims to boost delivery workers’ earnings from the app.

“We developed this approach with input from customers and Dashers, including members of our Dasher Community Council. We have been testing the new model this month and refining the details based on feedback we’ve received from Dashers. We’ll continue to make improvements as we roll it out to all Dashers next month,” Tony Xu, co-founder and CEO, wrote in a blog post.

Under the new model, base pay for delivery drivers will now range from $2-$10-plus per delivery depending on the duration, distance and desirability of the order. Deliveries that are expected to take more time, that require a longer distance, and that are less popular with Dashers will have higher base pay. In addition, Dashers can earn more through promotions such as Peak Pay and Challenge Bonuses that will roll out in the coming months. As for tips, customers will be able to add a gratuity at checkout or after the delivery.

Xu defended his company’s decision not to change its policies until now. “We thought we were doing the right thing for Dashers by making them whole if a customer left no tip,” he wrote, “but the feedback we’ve received recently made clear that some of our customers who were leaving tips felt like their tips didn’t matter.”

The delivery wave is not just a U.S. thing, of course. One recent example of the situation outside of the U.S. comes from U.K.-based on-demand food delivery service Deliveroo It is is expanding its platform to include a pickup option, TechCrunch reported.

The new Deliveroo service will be called Pickup and gives people a no-delivery-fee option. The service is live in 13 U.K. cities and at over 700 restaurants. The plan is to offer the feature in 10,000 U.K. restaurants within one year. With pickup orders, restaurants still pay Deliveroo commissions, just less than it would be with delivery. Deliveroo is offered in over 500 cities across 13 markets — Australia, Belgium, France, Hong Kong, Italy, Ireland, Netherlands, Singapore, Spain, Taiwan, United Arab Emirates and Kuwait.

But when it comes to food delivery, Uber Eats retains a dominant and growing role. And what it does can have a broad impact, even when it goes outside the box. Earlier this year, it launched a dine-in option.

The customer can order their meal from the menu and then chose to either deliver themselves to the restaurant ASAP or (in some cases) schedule an arrival time.  The app then shows the customer how long the food prep will take and what the estimated travel time to the restaurant will be before supplying updates as the food is prepared.  The customer can then go in and be served as soon as he or she sits at a table. Tips can be added either in-app or at the table itself.

When it comes to true delivery — not dine-in — the rise of the connected home and voice-assisted retail is encouraging further growth as well.

As PYMNTS research has documented, in 2019, 31 percent of all consumers reported that they owned at least one voice-activated device, up from 14 percent in 2017. Not only has the share of consumers who own connected devices more than doubled since 2017, but they are also more likely to use those devices to make eCommerce purchases. Roughly one in every 10 consumers today uses voice-enabled devices and apps to browse, shop and buy goods online. It’s a remarkable acceleration of a technology that is still relatively young, and for which the use cases for commerce are both nascent and very much evolving

As all that happens, restaurant owners are trying to deal better with the costs of providing such delivery services and trying to find the best ways to gain new customers and boost revenue streams. But some restaurant and quick-service restaurants (QSR) operations will continue to their own way on delivery, perhaps providing lessons for other businesses. Take Domino’s, for instance. The pizza chain relies on its employees to make deliveries from its 6,000 U.S. stores and most of its 11,000 international ones, as well as runs its online-ordering app.

While rivals Papa John’s and Pizza Hut have said deliveries through Grubhub and DoorDash have helped them expand into new markets and boost sales, Domino’s Chief Executive Ritch Allison told The Wall Street Journal that the profit hit and reputational risk of working with those companies aren’t worth the extra revenue. “As profit is extracted from the industry, I think we’re going to see a lot of players really struggle,” Allison said.

Those are some of the main issues that will play out in the food delivery space in 2020.

Our data and analytics team has developed a number of creative methodologies and frameworks that measure and benchmark the innovation that’s reshaping the payments and commerce ecosystem. In the November 2019 Mobile Order-Ahead Report, PYMNTS talks with Dan Wheeler, Wahlburgers’ SVP, on how the QSR balances security and seamlessness to secure its recently launched WahlClub loyalty program.