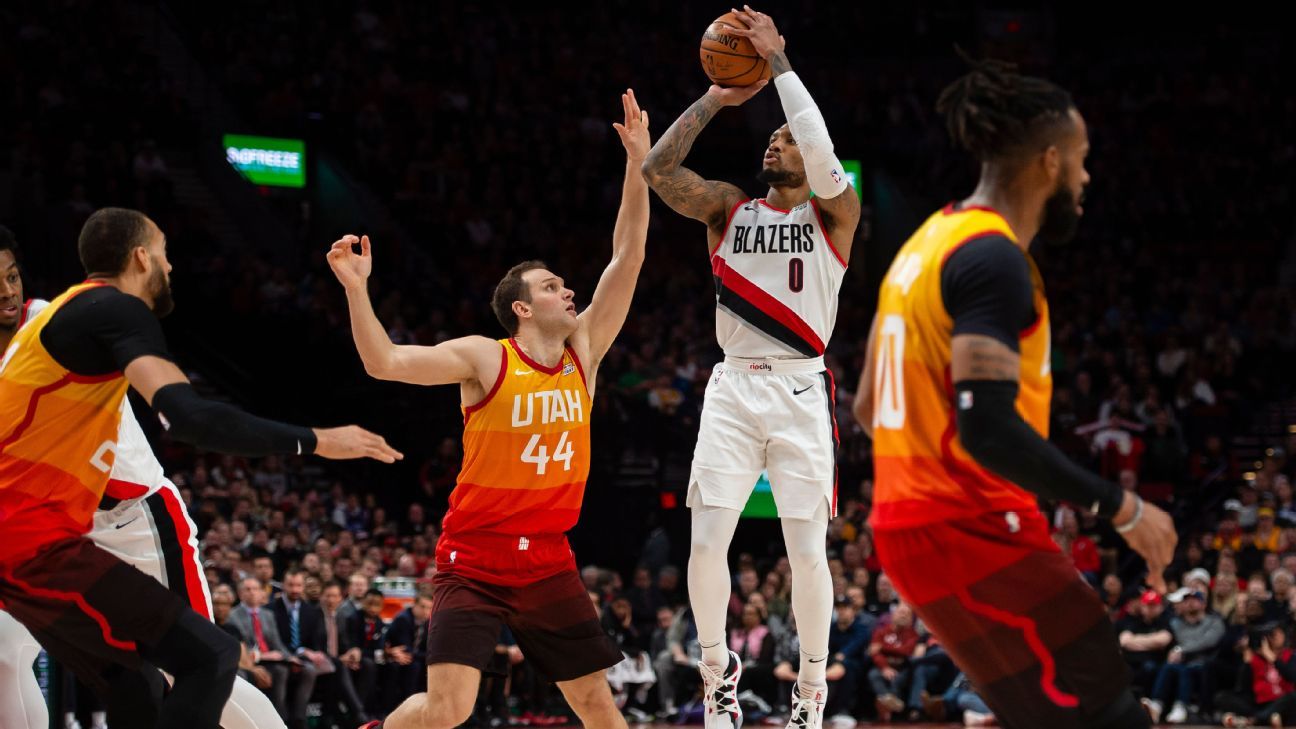 PORTLAND, Ore. — Portland Trail Blazers All-Star Damian Lillard continued his historic streak of dominant play Saturday with his third 50-point performance in his past six games as the Blazers defeated the visiting Utah Jazz 124-107 to win their fourth consecutive game.

According to Elias Sports Bureau research, Lillard is the first player in NBA history to average better than 45 points and 10 assists over a six-game span. He has gone for at least 47 points in five of the six games, and had his first career triple-double (36 points, 11 assists, 10 rebounds) in the other one.

“I don’t think we’ve ever seen anything like this,” teammate Carmelo Anthony said. “We’ve seen great basketball, we’ve seen guys score the basketball in different fashions, but what he’s doing, we haven’t seen that in a long time.

Lillard’s streak, which started with a career-high and franchise-record 61 points on Jan. 20 against the Golden State Warriors, has also been record-setting from beyond the arc. With nine more 3-pointers Saturday, his total of 49 surpassed Stephen Curry (46 in January 2019) for the most in NBA history over a six-game span.

While most of the attention has gone to Lillard’s scoring — his 293 points over the past six games is tied with Kobe Bryant (in March 2007) for third most over such a span behind a pair of overlapping streaks by James Harden last January — his playmaking has also been crucial to Portland’s success as opponents send traps and double-teams in Lillard’s direction to try to take the ball out of his hands.

Most Points Over 6-Game Span
Past 20 Seasons

“Teams are trying to get more aggressive and make it harder for me,” he said. “I’m just making the plays that I see. When I see them being aggressive, I’m not backing out. I’m going to continue being aggressive against it instead of just giving in to it. Cause a reaction — pick out the helpside defenders and guys that are pulling over and trying to crowd the paint. Just moving the ball to where the help is coming from. Guys are making shots and making the right plays. It’s pretty simple.”

Half of Lillard’s 12 assists Saturday — against only one turnover — went to center Hassan Whiteside, who had 17 points on 7-of-10 shooting and 21 rebounds while battling two-time reigning Defensive Player of the Year Rudy Gobert. By virtue of setting up four 3-pointers, Lillard created 28 points via assists to go with the 51 he scored.

All four of the Blazers’ victories during their current streak have come against opponents with above-.500 records, nearly matching their previous total of five such wins this season. As a result, Portland has moved into a tie with the San Antonio Spurs for ninth in the Western Conference, a game and a half behind the Memphis Grizzlies for the eighth and final playoff spot.

“It’s a good feeling,” Lillard said. “We’re coming together. I think that’s the best way to describe it. Getting healthier, starting to figure out what works for us. Trevor [Ariza] has made a huge difference for our team on both ends.