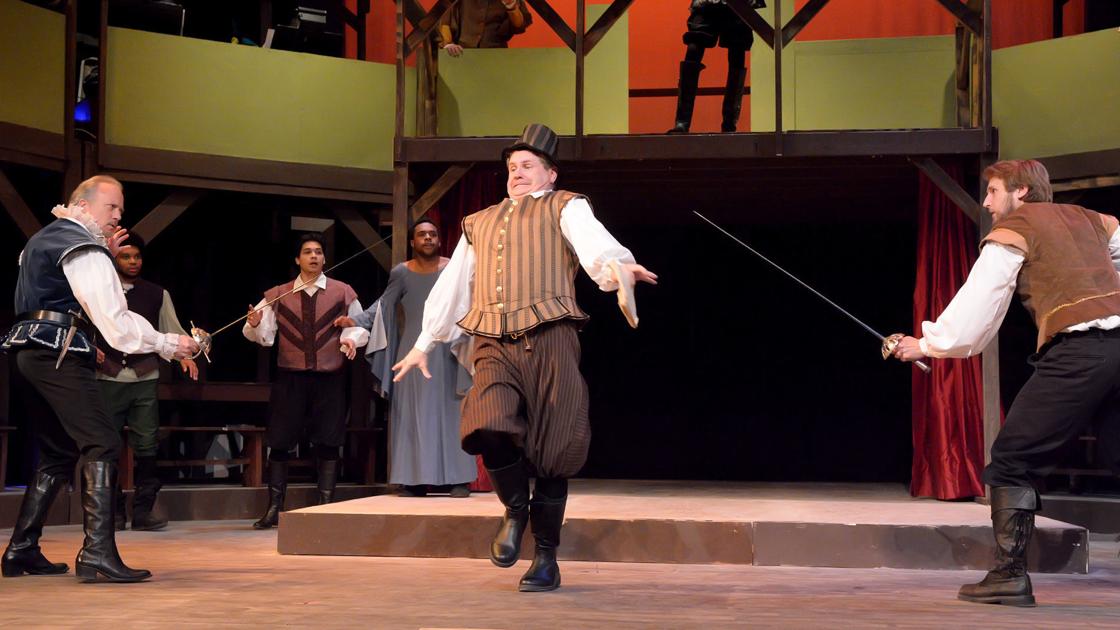 HICKORY — The Hickory Community Theatre’s (HCT) production of the romantic comedy ‘Shakespeare in Love,’ begins its 10 performance run this Friday, March 6 at 8 p.m. in the Jeffers Theatre.

Adapted for the stage by Lee Hall and based on the original screenplay by Tom Stoppard and Mark Norman, the story tells of a young William Shakespeare who has writer’s block. The deadline for his newest play is approaching but he’s in desperate need of a “muse” for his half-baked idea called Romeo & Ethel, the Pirate’s Daughter.

Chance puts him in the way of Viola de Lesseps, a beautiful young woman who will stop at nothing, including disguising herself as a man, to appear in Shakespeare’s next work. Backstage antics collide with onstage drama as Will and Viola’s love affair goes on to inspire his greatest masterpiece.

Tickets for Fridays, Saturdays and Sundays are $20 for adults and $18 for seniors. Thursday night tickets are $16 for all adults and $10 for students. Call the box office at 828-328-2283 or visit hickorytheatre.org to purchase tickets or get more information.

NEWTON — Tickets for the Green Room Community Theatre’s production of Disney’s ‘Frozen Jr.’ will be available to the public starting Friday, March 6.

Disney’s ‘Frozen Jr.’ is based on the 2018 Broadway musical, and brings Elsa, Anna and the magical land of Arendelle to life, onstage. Music and lyrics were written by Kristen Anderson-Lopez and Robert Lopez. The show will feature life-size Olaf and Sven puppets as well as a wintry mix of special effects to transform the theatre into a winter wonderland.

The cast includes 38 students aged 18 and under, presenting some of the best young vocalists and dancers this area has to offer. The musical is directed and choreographed by Heather Baynes, musically directed is by John David Whitener and Jeremy Whitener is serving as Stage Manager. The Producer of this show is Catawba Valley Health System.

Ticket prices are $16 for adults and seniors, $14 for students (13+), and $8 for children 12 and under. All ticket prices include NC sales tax. Purchase online through  www.thegreenroomtheatre.org. Tickets will also be available at the door starting one hour before the show, based on availability.

HIDDENITE — During the months of March and April, the Hiddenite Arts & Heritage Center’s Emerging Artists Wall exhibit space will feature the work of Wes Earp and Debbie Pollard.

Both artists share a love for the outdoors, hunting, fishing and utilizing natural resources. This common interest brought them to creating artworks that reflect that focus.

In the same methods that Native Americans gave tribute to their hunt and the animals that served them, Earp and Pollard may use bone or associated structures to paint, adorn and embellish. The end result is a unique combination of mediums that tell a story within the process.

Auditions to be held at Hickory Community Theatre

NEWTON — Hickory Community Theatre (HCT) is holding auditions for ‘Evita’ by Andrew Lloyd Webber and Tim Rice at 7 p.m. on Monday and Tuesday, March 9 and 10, with callbacks on Wednesday, March 11. This is Pamela Livingstone’s last production as HCT’s Artistic Director.

Tony Award winner for best musical, ‘Evita’ is the smash pop opera about a passionate woman who went from the streets of Argentina to show business stardom, to the highest levels of influence in Buenos Aires. At once both a saint and a villain, Eva Peron’s dramatic, meteoric rise from poverty to prosperity is a groundbreaking – and heartbreaking – depiction of populism, politics, and celebrity.

Auditions will take place in the HCT complex at 30 3rd St NW in downtown Hickory. The play calls for over 20 actors. There is also a need for six boys and girls. Auditions are open to everyone. Those auditioning should prepare a song in the same style as the musical and bring sheet music if possible.

Rehearsals begin Monday, March 16 at 7 p.m. and will continue, Sunday through Thursday, until the opening performance. The play will be performed in the Jeffers Theatre, May 8 – 24, 2020. All actors are required to be at all performances.

NEWTON — Join us The Green Room Community Theatre for auditions for the musical ‘Bye Bye Birdie’ on March 9 and 10 at 7 p.m.

This is a story about a loving send-up of the early 1960’s, small-town America, teenagers, and rock & roll, ‘Bye Bye Birdie’ remains as fresh and vibrant as ever. Featuring a tuneful, high-energy score including “Put on a Happy Face” and “One Last Kiss,” this show is a true blast from the past.

Roles, including ensemble and principles, are available for adults and youth ages 12 and older. Please prepare 32 bars (or a verse/chorus) of a song in the style of the show or that showcases your vocal abilities. Sheet music is highly encouraged. Be prepared to dance for your audition. Wear appropriate clothes and shoes that will help you easily move.

These auditions will be held at the Old Post Office Playhouse, located at 10 South Main Avenue in Newton. Please enter at the lower level door at the back of the building (on South Ashe Avenue). You only need to attend one of the audition dates.

For more information about ‘Bye Bye Birdie’ or any of the other programs offered by The Green Room Community Theatre, please visit us on the web at www.thegreenroomtheatre.org or call us at 828-464-6583.

HIDDENITE — St. Patrick’s Day is the perfect opportunity to celebrate the time-honored traditions of Irish music, dance, food, and fellowship. The Hiddenite Arts & Heritage Center’s annual “Irish Done Right!” will offer all of these traditions at their best.

Beginning at 6:30 p.m. and serving as a prelude to the dinner performance, the audience will be entertained by Celtic Youth Band students of Veda Bafford. Dinner will begin at 7 p.m. with the main program to follow at 8 p.m.

Tickets are $16 per person with dinner, performance and tax included. Reservations are required and may be made by calling the Center at 828-632-6966.

HICKORY — The Rotary Club of Hickory will hold two auditions for the Rotarian Idol 2020 singing competition. One audition session will be held Thursday, March 12 from 5:30-7 p.m., and a second one on Sunday, March 15 from 1:30-3 p.m.

Rotarian Idol is the major fundraiser for the Rotary Club of Hickory which will soon celebrate its 100th anniversary. Funds raised go to support local educational programs such as the Imagination Library, college scholarships and Teacher of the Year awards, as well as humanitarian and educational projects around the world.

Auditions will be in the Drendel Auditorium at the SALT Block at 243 3rd Ave. NE in Hickory. There is a $5 entry fee. Rotarian Idol is a singing competition only. The competition is for amateurs; professional entertainers may not enter.

Auditions are a cappella. There is no accompaniment provided and each contestant will sing a brief section of the song of their choice. Singers who are under 18 at the time of the audition must have written parental consent to enter the competition.