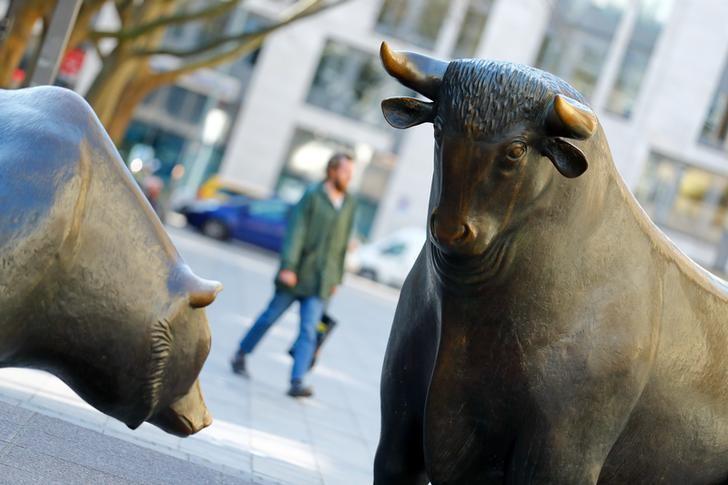 LONDON (Reuters) – Business activity has cratered across Europe as attempts to contain the coronavirus pandemic push governments to shut down vast swathes of their economies, from shops to factories to restaurants, surveys showed on Friday.

The pandemic has infected more than a million people worldwide, paralysing economies as consumers worried about their health and job security stay indoors and rein in spending.

Governments in the euro zone have unveiled unprecedented stimulus measures and the European Central Bank has increased its asset purchase target for this year to around 1.1 trillion euros to try and mitigate the fallout.

But with businesses shuttered across the region, Purchasing Managers’ Indexes compiled by IHS Markit slumped to record lows in March and suggested it could be months before things returned to any semblance of normalcy.

A final composite PMI for the euro zone plummeted to a record low of 29.7 from February’s 51.6, lower than the flash reading of 31.4 and marking by far its biggest one-month drop since the survey began in July 1998. The 50 mark separates growth from contraction.

“It’s clear that the economy is contracting more quickly than ever before during peacetime,” said Jack Allen-Reynolds at Capital Economics.

“We think that GDP across the euro zone will fall even more quickly in Q2 than the surveys suggest. We estimate that while lockdowns are in place, output will be at least 25% below its normal level.”

IHS Markit said the data indicated the economy was already contracting at an annualised rate approaching 10% and warned worse was to come in the near future.

That was borne out by the survey as demand for new business fell at the fastest rate on record.

Like its manufacturing counterpart, activity in the bloc’s dominant service industry has also almost ground to a halt, with travel, tourism, restaurants and other leisure activities all hit hard by virus containment measures.

FILE PHOTO: Bull and bear, symbols for successful and bad trading are seen in front of the German stock exchange (Deutsche Boerse), as markets react on the coronavirus disease (COVID-19) in Frankfurt, Germany, March 25, 2020. REUTERS/Ralph Orlowski

With the lockdowns likely to last for some time, optimism all but dried up.

The services business expectations index almost halved to a survey low of 33.5, more than 8 points below its previous record low set in November 2008, just as the euro zone debt crisis was taking shape.

European stock markets sank on Friday, erasing meagre gains for the week, as more companies flagged a hit to business from the coronavirus pandemic.

Italy and Spain have so far taken the biggest hit on the continent from the pandemic but all four of the currency union’s top economies – and Britain, which recently left the European Union – saw activity collapse.

Already teetering on recession before the coronavirus outbreak, Italy saw its services PMI dive to 17.4 while the new business index sank to 13.8. Economists now forecast a severe recession in the euro zone’s third largest economy this year.

In Spain, which has been under lockdown since March 14, the services PMI – which had been above the breakeven ‘50’ mark for over six years – sank to 23.0.

“The Italian and Spanish services PMIs in March shows that the slump might worsen in April, when the government expects COVID-19 infections to peak,” said Samuel Tombs at Pantheon Macroeconomics.

Services activity in Germany, Europe’s largest economy, also collapsed and firms shed staff at the fastest rate in almost 23 years, giving a glimpse of the damage done to the job market as businesses close to limit the spread of coronavirus.

In France, where the economy is operating at two-thirds of its normal level according to estimates from the INSEE official statistics agency, its PMI for services fell to 27.4.

While in Britain, the surveys showed a record-breaking slump among services and manufacturing firms deepened in late March with much of the economy in a shutdown.

“In one line: horrendous, and probably not reflecting the full devastation,” Pantheon’s Tombs said.